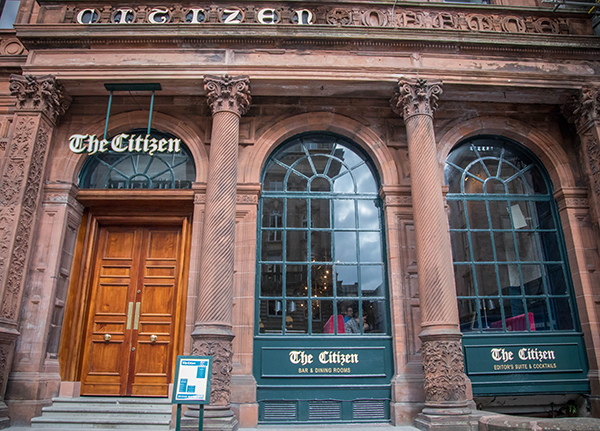 The Citizen Bar and Dining Rooms

Set in the beautiful surroundings of the completely restored grade A1 listed building on 24 St Vincent Place, Glasgow; The Citizen is set to be Glasgow’s newest hot spot. The Citizen Bar and Dining Rooms, brought to us by DRG, pays tribute to the glory days of The Citizen newspaper, as well as celebrating everything Glasgow has to offer now and in the future.

Founded in 1842 by James Hedderwick, The Citizen was one of the first newspapers in Glasgow. By 1864, it had become so successful that an evening edition was founded – one of the first three evening newspapers to be printed, published and sold in the Glasgow area. Over a century later, they printed their final edition on Friday 29 March 1974.

Work on the development of The Citizen Bar and Dining Rooms was undertaken by DRG Interior Designer Kirsten Davis and main contractors Hugh Stirling Ltd.

Kirsten spoke to Premier Hospitality about the project:

“I was given an initial brief from the directors for a light refurbishment of an existing bar and restaurant in Glasgow’s city centre. The first thing we did was visit the property to review and understand what the scope of refurbishment would be. As the project progressed the brief developed from a light refurbishment to one that was more involved, which included some of the restrictions due to the property’s listed building status.  As part of the scope I wanted to include a focus on the rich history of the building and the context of its location in Glasgow’s historic city centre. The building is a wonderful example of Glasgow’s rich Victorian architecture, it was the first red sandstone building in the city, and the Citizen newspaper, whose headquarters it formerly was, is still part of the living history of the city. 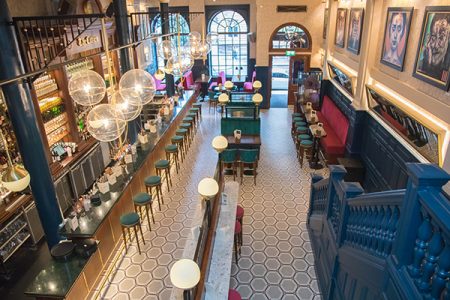 “As part of drawing on the historical context of the building, the interior design referenced and was inspired by the previous occupants, the Citizen Newspaper office, through various design details. For example, we commissioned a local artisan stain glass company called Rainbow Glass, to create some beautiful stained glass panels for us. These were inspired by the old printing blocks and part of the design incorporated the letters for The Citizen logo. Other bespoke items which give the interior a nod to the past are the mosaic flooring, the brass metalwork and the light fittings in the bar area. I also aimed to soften the space with textured wall covers on the walls and the ceiling, which also served to highlight the fantastic architectural details.

“A former journalist at The Evening Citizen, Stewart Fair, kindly donated archive photography and newspapers, which we have used around the property. He started his career at the paper as a lift boy and as the years progressed he became a staff photographer for the Citizen. The original photographs document Glasgow in the 60s, as well as original newspaper headline covers, marking events, such as man’s landing on the moon. We also commissioned a Glaswegian photographer Charles Hamilton. He is a street photographer and captured beautifully Glasgow’s present day citizens, which we thought was a nice way to tie in Glasgow’s past and the present together and to highlight the city’s diversity.

“Even though the main bar is quite expansive,  with impressive ceiling heights, I have created little nooks and booth seating to create a cosier feel within the space, which will offer a our customers a variety of seating options when enjoying one of the fantastic cocktails on offer.

The new venue serves classic food over brunch, lunch, afternoon tea and dinner within a 218-seated bar and dining room. The space boasts a private dining room, alongside a carefully crafted drinks and cocktail list served up by some of Glasgow’s finest mixologists. Making an appearance for the first time in Scotland since the 1980s, The Citizen is the first bar in the country to serve Tennent’s Tank Lager.

Keith Lugton, Master Brewer at Tennent’s said: “We’ve been lucky enough to have seen the development of The Citizen over the last few months and it’s going to be an amazing addition to Glasgow’s bar and restaurant scene. It’s also exciting to be launching our first Tennent’s Tank Lager since the 80s in this bar where drinkers will be served the freshest pints of Scotland’s best-selling lager.” 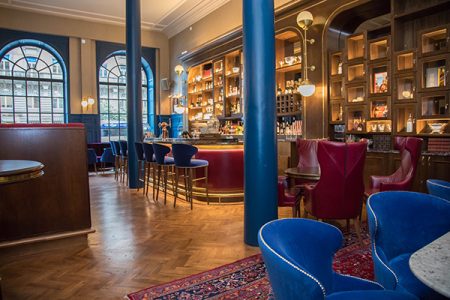 The Citizen Restaurant and Bar opened to the public on 6th September 2017.

Kirsten concluded: “There is really no other place like it in Glasgow. When comparing it to other bars in the city, it is quite unique in terms of its style and its scale. My aim was to create a restaurant and bar interior that will offer accessible glamour for Glasgow’s citizens, a venue that a wide customer base will feel happy to come in and enjoy the great food and drinks on offer.

“This project has been so much fun to create and I am delighted that I was given the opportunity to create the interior design for a venue that will hopefully become an integral part of the city fabric. In the process of working on this project I’ve also learned more about the history of the city, and I’ve heard so many colourful stories from Glaswegians about their memories of Citizen newspaper and the building. It’s been a fantastic project to see come to fruition and I’m really happy with the result.”