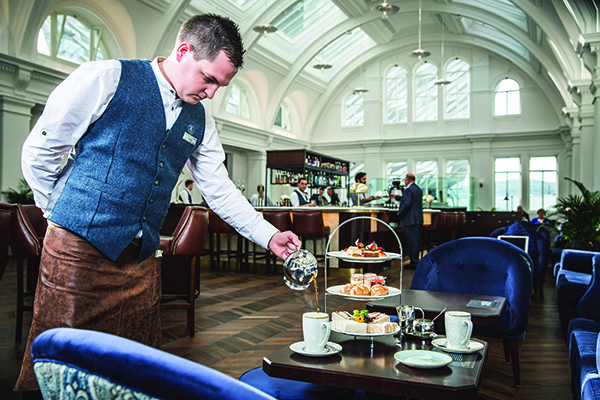 Located in the former headquarters of Harland & Wolff, builders of the historic RMS Titanic, Titanic Hotel Belfast is the city’s newest luxury hotel. After a major restoration project spanning two years, the 119-room hotel welcomed its first customers in September.

One of the most important restoration projects in Northern Ireland, the hotel sits at the heart of the Titanic Quarter and is open for both guests and the general public to explore. Having been left derelict for a number of years, the building has been transformed by a £28m restoration that was partly funded through a £5m grant from the Heritage Lottery Fund (HLF).

Titanic Hotel Belfast is operated by Harcourt Developments and alongside its 119-rooms has a 166-seater dining room, The Wolff Grill, with its own private dining area. Public tours of some of the hotel’s key historical areas are also available.

Incorporating as much of the original structures as possible, new elements have also been added like the addition of pavilions. To gain a greater understanding of the external and internal works, Premier Hospitality sat down with the key parties involved. 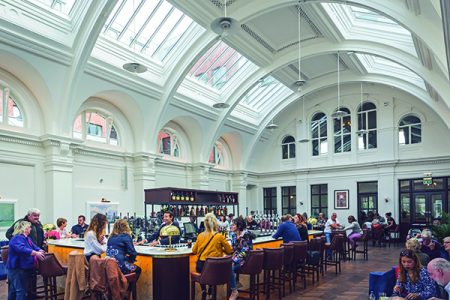 Robinson McIlwaine Architects has been involved with the project since 2009. This, along with their experience of restoring the adjoining Titanic House building into headquarters for Titanic Quarter made them ideally placed to bring the building back to life. Stephen Miskelly, Partner at the firm, spoke to PH about the brief they were given for the project:

“Initially we worked with Harcourt Developments on the Masterplan for Titanic Quarter. From this we became involved in developing the ARC at the entrance to Titanic Quarter and the adjacent Premier Inn Hotel.

“Our brief was to restore this historically significant B+ listed building and convert it into a boutique hotel. The brief at the early stage was reasonably loose in terms of room numbers and the overall look of the building. Due to the buildings listing there were plenty of discussions with the local Historic Environment Division (HED) to understand what we could and couldn’t do to convert the building into a hotel. The client also applied for Heritage Lottery Funding for the restoration of the Drawing Offices and other heritage spaces so the brief developed to incorporate their requirements and to provide public access to these areas.

“Once the brief was fully developed we explored the potential of the existing building. As the majority of the ground floor had to be retained because of its heritage we had to work out how to build a hotel around these spaces. We did this by looking into the buildings history.

“We discovered that there were various infill buildings between the listed drawing offices that had been demolished and there also appeared to be a rooftop extension at one period as well. We decided we wanted to infill the three ground floor spaces again in a style that is contemporary yet sympathetic to the existing buildings heritage resulting in the 3 pavilions. We also added a mansard style bedroom floor on the roof of the existing 3 storey building, and a new 5 storey bedroom wing to fulfil the brief.”

The listed nature of the building coupled with the involvement of the HLF meant careful consideration had to be given to the conservation aspect of the project. Working alongside Robinson McIlwaine Architects as building heritage consultants and conservation architects was Consarc Design. Graeme Moore from Consarc outlined to PH what exactly this entailed:

“Following previous studies on the building in 2006, we were involved with the current project since 2014, beginning with achieving the funding from the HLF. That process begins with the writing of a conservation management plan which, once written, is referred to constantly throughout the project. The plan assesses the significance of the building and what features are particularly important so during the project nothing of value or importance gets lost.

“The building was in extremely poor condition and it had been vacant since 1989. It had all of the problems that come with that such as a leaking roof and plants growing inside it. Before the major works started, the management of the building was taken over by the Titanic Foundation who instigated some holding repairs to keep the building sound.

“There were particular pieces of building fabric which couldn’t remain in their original position. Examples of that would be the two storey extension which was to be removed because it wasn’t deemed to be of significance. Within it, however, there were tiles identical to those used in the Titanic swimming pool so we lifted them and reused them in other parts of the building.” 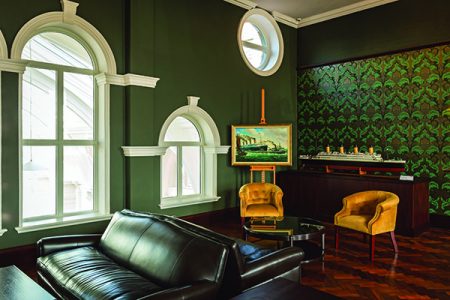 While much of the external work focused on conservation, the internal design had to find a blend that was both a nod to the past but also catered to the needs of the modern traveller. Having created the interior for the award-winning Titanic Hotel Liverpool, Dublin-based ADI Studio was appointed to create a distinctive look for Titanic Hotel Belfast. Director Maria Rice expanded:

“’There was an extensive brief which combined the requirements from a heritage perspective but also from a hotel operation one. The client wanted the story of Harland and Wolf to be embedded in the interior scheme. A unique aspect of the interior design was collaboration with the interpretation consultant and we had to work closely to create something that blended the two disciplines together.

“With the public spaces, the two drawing offices are certainly a standout. They were built around the late 1880s and are the heart of the buildings. They are the most elaborately decorated elements and have a huge amount of architectural detailing. Around this there is a collation of buildings that have different dates from 1900 right up to 1922 and then the present day additions. For us, one of the challenges was to be sympathetic to period rooms but also connect the new additions.

“We wanted to give the bedrooms a bit of an edge. We took an industrial, ship building influence for the bedroom scheme and his flows down into the new pavilions as well.”

A hint at the scale of the work can be gained from the two year build time and Abercorn Construction was responsible for managing much of this. Reflecting on some of the challenges the project posed, David Kelly from Abercorn commented:

“We have a longstanding relationship with the client and have done a lot of the construction work in the Titanic Quarter. The hotel is one part of a much greater scheme. We know the area inside out and this really helped with the project.

“The building was derelict and some parts had been severely damaged. The difficulties were that this is one of the most important conservation projects in Ireland and there was a lot of sensitivity surrounding the building. The initial difficulty was making the building structurally sound before moving onto the roof and making it watertight. We then moved onto the envelope of the building, assessing and refurbishing the windows.

“All of this had to be done in conjunction with a conservation management plan. The challenge with this is finding the right tradesman for the work. For instance, one of the main elements of the work was the plastering of the inside of the building. This had to be done with traditional lime plaster but not everyone can do that in the modern era. Getting the correct people was a challenge.” 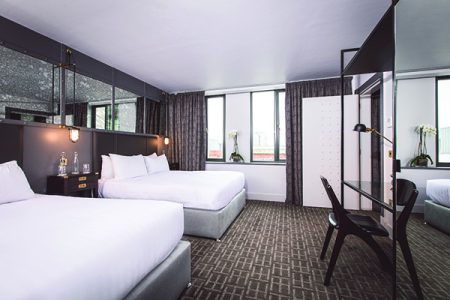 It’s over one hundred years since RMS Titanic left Harland & Wolff shipyard in Belfast to embark on her maiden, and only, voyage. The city has undergone much change in the time since but its involvement in the construction of the largest ship in operation at the time remains a huge source of pride.

The opening of Titanic Hotel Belfast is another step in both preserving the legacy of the Titanic and creating a major tourist hub for the city. Luxurious and stylish, the hotel oozes character and charm and will be a must visit destination for decades to come.

Based in Castlecomer, Co. Kilkenny, Nirvana Lighting is a lighting consultancy, specialising in the supply of decorative, architectural and commercial light fittings for the hospitality sector. The company has been in operation for eight years and within this time has been involved with an array of projects, including The Guinness Storehouse in Dublin and various works for the McGettigan’s chain of Irish pubs in Dubai, ROI & UK.

“Working on Titanic Hotel was important to us as it gave us a chance to showcase our lighting products on such a beautifully designed project.”

“At Nirvana Lighting, we pride ourselves on our ability to deliver high quality services & fittings on jobs that have tight schedules.”