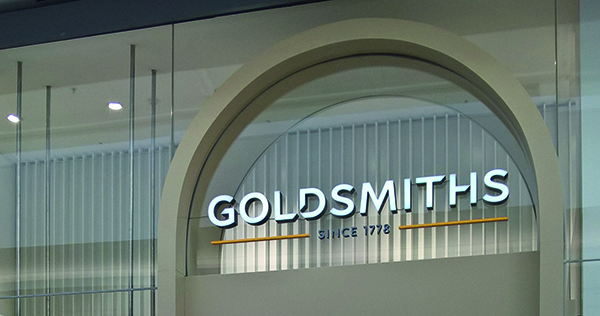 The Goldsmiths store, located in Westquay shopping centre, has re-opened with an impressive new shop-fit and extension. The showroom which stands at over 3,000 sq ft is situated on the third floor, close to the John Lewis entrance.

The investment has seen the extension of a luxury watch room that boasts a variety of branded areas including Omega, Breitling and TAG Heuer, alongside Tudor and Bremont ranges on show, as well as the recently re-launched Goldsmiths Pre-owned range.

Customers are also able to explore a variety of jewellery collections on offer as part of the revamped showroom – from unique pieces by Mappin & Webb to an exclusive collaboration with Jenny Packham. Experts are on hand throughout the showroom to consult and provide one-on-one, specialist customer service – something which Goldsmiths prides itself on.

An additional four jobs have been created as a result of the refurbishment with the recruits joining the Goldsmiths Southampton team headed up by showroom manager Andrew Kaiser, who has been with the brand for 4 years.

Work was undertaken by Quadrant Design alongside Nuttalls.
Speaking to Premier Retail magazine about the project, Natalie Kerrison, Junior Designer at Quadrant Design Ltd said: “The project involved converting the existing Boutique branded half of the store into a Goldsmiths luxury watch room. Refurbishment works to the rest of the store to refresh were also completed, introducing new Goldsmiths finishes. New customer consultation areas, signage and branded areas were also introduced to the existing Goldsmiths half of the store. We also had the exciting opportunity to develop a new display fixture – new double tiered window display tables designed especially for the newly expanded store in Southampton. 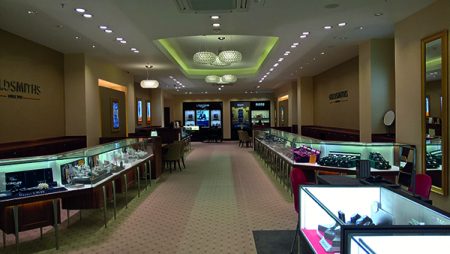 “The biggest challenge for us was ensuring continuity and a seamless transition between the two halves of the store. However, the end result really allows for the spaces to flow into each other effortlessly, whilst also giving a great anthesis on the branded areas making them a key presence within the store.”
Goldsmiths Westquay Southampton manager Andrew Kaiser added: “The team and I are really excited to show off the results of the enhancements and expansion into the neighbouring unit. Goldsmiths is synonymous with Christmas so it’s the perfect time to capitalise on the increased footfall in the centre – we’re looking forward to a successful festive season ahead.”

“The project has been extremely positive,” said Natalie. “The new expansion of the store was a great success and we are very grateful for all of the positive feedback that we have received. This was an amazing opportunity for me to work on a project which focused on creating high quality, luxury spaces, in a store that has such a great presence within the centre. We are very happy with the store and it has been a pleasure working on this project.”

The new Goldsmiths Southampton showroom opened Friday 22 September and can be found at Unit 37 Westquay Shopping Centre, Southampton, S015 1QD. The Southampton store is open Monday to Thursday, 9am to 8pm, Friday from 9am until 10pm, Saturday from 9am to 8pm and Sunday from 11am to 5pm.

Goldsmiths is the UK’s largest luxury high street retailer with over 110 stores nationwide and online at goldsmiths.co.uk.