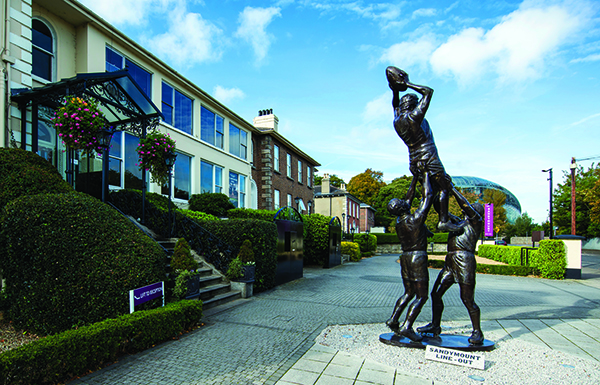 Public areas benefiting from an extensive upgrade and re-modelling in the project include the bar, restaurant, reception and function space. These works were undertaken in a phased programme scheduled over six months – with the hotel remaining fully operational throughout – representing a significant challenge successfully overcome by the project team.

Originally a terrace of Victorian buildings, the hotel is situated on Herbert Road, close to the Aviva Stadium.

The hotel and is owned and run by John Loughran and his son Gerard, and this latest upgrade is in line with their ethos of ongoing review and continual improvement to provide the best possible experience for their guests and visitors.

Jayne Underhill of John Duffy Design said: “Working within a tight budget and time frame, each area of the hotel was designed with its own individual character whilst still in keeping with the period buildings. We wanted to create a contemporary look, whilst at the same time retaining the ‘heritage feel’ of the hotel. 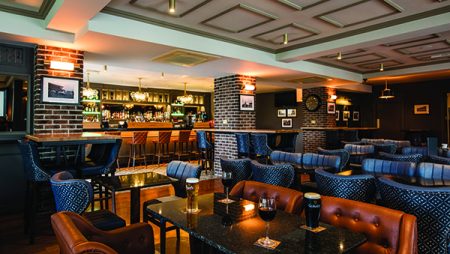 “The hotel’s main bar is named the ‘Line Out’ reflecting its close proximity to the Aviva Stadium, and is a popular haunt for local residents and those visiting rugby matches, as well as guests of the hotel.

“With this in mind the bar includes rugby themed elements throughout and incorporates a whole host of attractive new design features including brick clad columns, rich timbers and decorative floor tiles, featuring a palette of dark and moody tones. Simple patterns and textures have been used on the walls, with the overall effect being further enhanced by the introduction of bespoke lighting geared to creating the perfect ambience.”

The reception area has also been re-modelled with new decorative wall cladding being added on the chimney breasts, as well as new wallpaper, and the relaxed ambiance has been further enhanced by the introduction of new furniture, fittings and feature lighting. The furniture is an elegant combination of classical pieces and period items, in a range of stylish materials including leathers, patterned fabrics and plush velvet. A new library area was also created within a space formerly occupied by a ‘dry bar’.

In addition, the restaurant area has been opened up to provide a more spacious look and to maximise natural daylight, as well as enhanced views of the garden within the dining space. A new bar and food service buffet area were also created for hotel guests and corporate diners.

A new hard landscaped terrace with raised planters and water feature has been added within an attractive rear garden located adjacent to the hotel restaurant, providing the perfect flexible space for a whole host of events.

Jayne Underhill said: “We are delighted with the current success reported by the hotel and hope to continue working with the team in its on-going development plans for the future.”

In addition to its new 4 Star rating, the hotel has recently won the prestigious title of “Europe’s Leading Green Hotel 2017”.

Sandymount Hotel began life as a four bedroom guesthouse which was opened in 1955 by Tyrone man George Loughran and his wife, Rosaleen, nee McConn, from Downpatrick. Three weeks after they moved in, Rosaleen gave birth to the second of five children, John, who now runs the hotel. It’s been very much a family operation from the start with everyone helping out.

Soon George and Rosaleen were able to extend the guesthouse by buying the neighbouring property. They continued to expand and by the time the couple handed over the hotel to the next generation in 1988, it comprised five of the period houses and had 100 bedrooms. It has now expanded to encompass eight of the two storey buildings. The couple continued to live in their penthouse apartment above the hotel and divided their time between it and their holiday home in the Canaries until Rosaleen’s death in 2004, followed by George’s three years later. 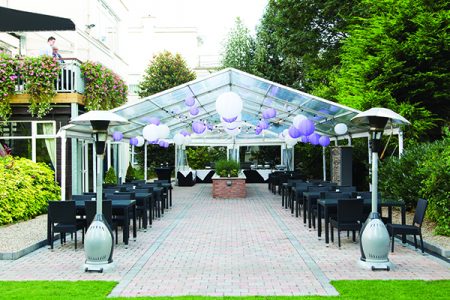 John has fond memories of growing up in the hotel, with everyone mucking in with the dishes and making up beds.

Former accountant John married a receptionist at the hotel, Audrey, and jokes that his parents interviewed his wife before he ever met her. She left the job to raise their four children, one of whom, Gerard, works alongside John in the hotel. The others have followed diverse routes, with the eldest, Lorraine, having worked for London Harlequins, son Oisin based in Toronto and the baby of the family, Sinead, playing hockey for Ireland.

These days the Sandymount Hotel may be grander and much larger – it’s among the top 20% of hotels in Dublin on TripAdvisor – but at heart it remains the same with an enduring emphasis on making sure guests are comfortable and well cared for. In fact, the longest serving member of staff, Beatrice O’Donoghue, has worked on the reception for 37 years and Rose Foley, the housekeeping manager, has been with the family for 30 years.

Rathgael Contract Interiors specialise in the design and supply of curtains, voiles, pelmets, headboards, quilted throws, cushions and blinds including Roman, Roller, Vertical, Wooden and Motorised, for the hospitality, leisure and commercial sector. The company has been in operation since 1994 and within this time has worked on a range of prestigious projects including various hotels, bars, nightclubs, restaurants, nursing homes, community centres and private homes.

“At Rathgael Contract Interiors we pride ourselves in the knowledge that all our products are manufactured to the highest quality in our modern 5,000sq.ft factory in Dungannon, Co Tyrone.” 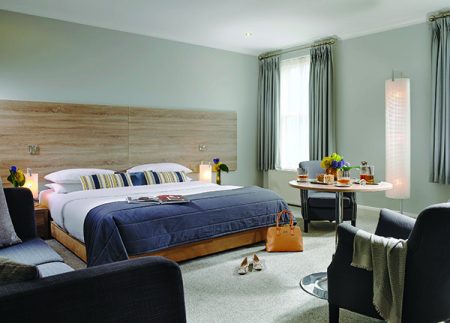