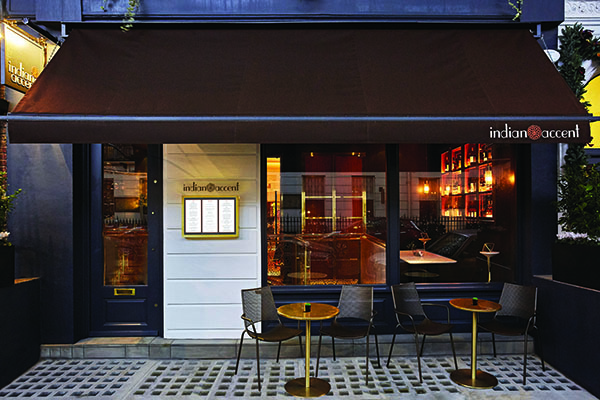 Excellence with an Indian accent

The project was carried out for Old World Hospitality, on a site previously occupied by another of their restaurants – Chor Bizarre.

The new venue, which occupies two floors, was designed by one of the UK’s leading restaurant design companies, DesignLSM. WFC Contractors was the main contractor. 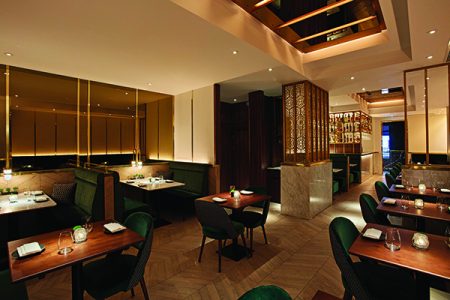 The interior design is intended to be both modern and referential. Re-imagined materials familiar in Indian architecture, such as brass, marble and plaster are combined to create a contemporary and clean backdrop for the creative dishes.

“Our brief was to adapt the original design to suit its new Mayfair address creating a refined and luxurious dining environment for patrons.”

The refurbishment involved stripping out the ground and basement floors to create two inviting restaurant spaces with subtle elements that reflect the brand’s subcontinental roots.

Steve Wragg continued: “The restaurant lobby is designed to be warm and atmospheric, welcoming diners and providing them with a glimpse into the main restaurant area through opulent glass door. The space is adorned with natural stone flooring, dark grey polished plaster walls and walnut joinery framed with a thin brass edging. A specific feature is the traditional liquor display cabinet showcasing a vast array of the world’s finest whiskeys.”

A stunning spiral staircase decorated with brass detailing leads diners downstairs to the lower ground floor, which is an intimate and inviting space ideal for private functions and diners.

The exterior has also been re-imagined with a traditional timber shop front, complimented by subtle projecting signage.

The restaurant’s innovative menu has been designed by Chef Manish Mehrotra. His creativity showcases the unique amalgamation of fresh local produce combined with home-style nostalgic cooking using unusual ingredients from across the globe.

The result is a menu that excites the adventurous yet satisfies traditional palates. Manish has won multiple awards and is considered one of the leading chefs in the world by critics and diners alike.

Steve Wragg concluded: “We are delighted to have worked with renowned chef Manish Mehrotra and Old World Hospitality on this exciting culinary venture and look forward to seeing the impression that the restaurant will make on London’s affluent dining scene.”

Rohit Khattar, founder chairman of Old World Hospitality, said: “We are so very grateful to the loyal diners of Chor Bizarre for their love and patronage, that kept us going for 20 glorious years.

“The decision to close Chor Bizarre was hard. However, it did need major refurbishment after so long, and whilst we were looking for a home for Indian Accent, we realised that there was no space more perfect than 16 Albemarle Street, Mayfair. We do hope that London embraces Indian Accent as warmly as New York has.”

Indian Accent opened a branch in New York in 2016 to critical acclaim, including being ranked the Best Indian Restaurant in the city by both Zagat and New York Magazine, and among the City’s Best New Restaurants of the Year by Eater, TimeOut and Zagat. It is the only Indian restaurant to feature in America’s 100 Best Wine Restaurants by Wine Enthusiast.