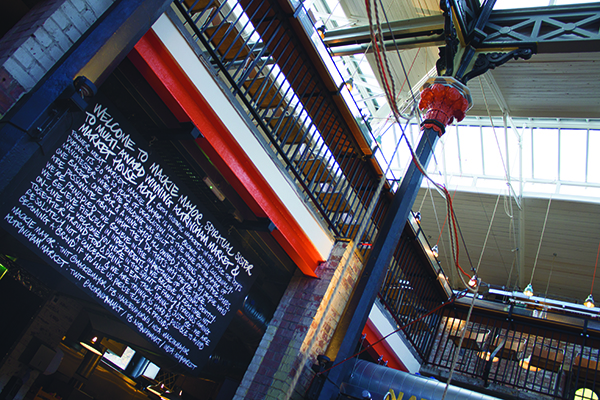 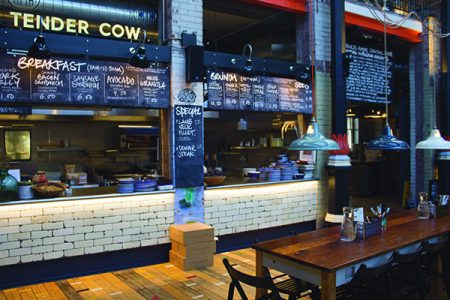 The site, which holds almost 500 people, was transformed by the team behind Altrincham Market, led by Nick Johnson. The building has been carefully restored to open up both the ground and upper floors with rows of long bench tables and seating put together with a semi industrial look and feel throughout.

In 2015 Buttress Architects were engaged by Muse Developments to help with essential repair work and to undertake limited restoration work to make the building safe and viable for full redevelopment.  Initial repair work saw the internal partitions and the internal finishes stripped back. The roof was re-glazed to make the building watertight and the stone envelope was repaired and restored. The aim of these first phases was to ensure that the building could be brought back into beneficial use.

Following this stage of work, a lease was agreed and Buttress Architects worked with the operators to secure planning permission to turn the building into a leisure and dining venue; a space that will contribute to the Norther Quarter’s thriving food and drink scene.

The final design at Mackie Mayor mirrors that of the other remaining former Smithfield market building nearby and is plush and urban chic, with bare bulb light fittings, some graffiti, red brick walls and a quirky mural of Theresa Mays as the head of Gorgon Medusa.

There is a strict no booking policy at Mackie Mayor so guests just turn up when they fancy a bit to eat, sit where they want and leave before the venue closes.

Johnsons Market business – market Operations, which Nick runs with business partner Jenny Thompson – took over the building in August 2016. Based in the Northern Quarter since 1857, the site was previously a meat market and is one of the last standing buildings from the old Smithfield Market, which closed in 1972. Once closed, the site was used as a shop mobility shop and a skate park before being restored by Muse Developments in early 2017.

Nick and Jenny have enjoyed fantastic success with Altrincham market house since taking on the site in 2013 and restoring it the next year after a £175,000 revamp.

Mackie Mayor has been described as ‘cleaning up the once abandoned and derelict part of Manchester city centre’ by breathing life into a neglected building.

Mackie Mayor is open Tuesday to Friday from 8am to 10pm, Saturday from 9am to 10pm and Sunday 9am-6pm. The site is closed on Mondays. 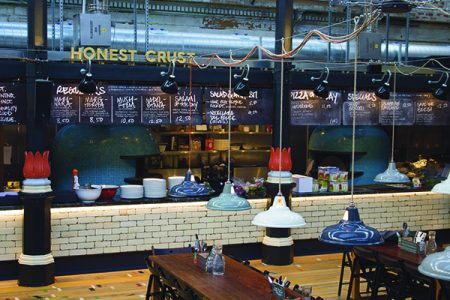