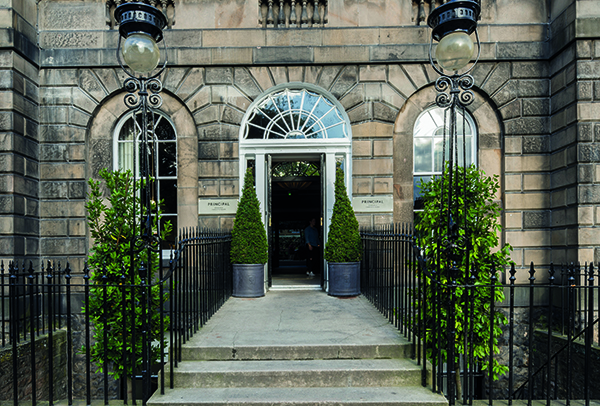 Housed within a Grade II*-listed building, The Principal Edinburgh Charlotte Square has opened following a £25m transformation led by award-winning interior designs studio Goddard Littlefair. The new hotel joins the PRINCIPAL family of stand-out, city centre hotels, each with its own unique treatment and personality, entirely appropriate to its historic building envelope and location.

The brief given to Goddard Littlefair covered a complete revamp of all the hotel’s public spaces, including the reception, lounge areas, ballroom and meeting rooms, plus the stunning central ‘Garden’ all-day dining area. All of the hotel’s 181 rooms and 18 suites, plus linking lobbies and corridors, were also completely redesigned. 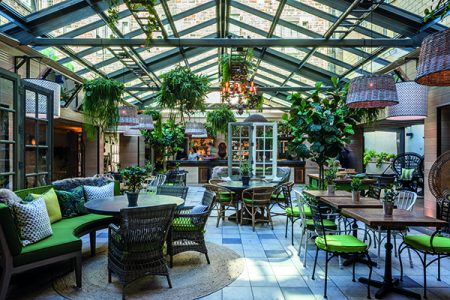 The final element of the scheme was the creation of an exciting new bar and restaurant offer –  BABA, a new destination hotspot for Edinburgh, masterminded by the culinary team behind hit Glasgow restaurant Ox and Finch and featuring a Levantine-inspired design feel and menu.

“Like a cosmopolitan clubhouse, the scheme for The Principal Edinburgh Charlotte Square is eclectic, intriguing and full of references to travel, from set-dressing with vintage suitcases, hats and canes to The Map Room, where the walls are lined with historic maps from around the world. The interior feel is plush and elegant, with interesting and varied furniture and tactile, high-quality fabrics, such as richly-coloured velvets and leathers, all set within a series of stand-out individual spaces.”

The hotel stayed open for trading throughout this current refurbishment, which was completed in phases, with the first set of bedrooms completed in 2016 and the new public areas in stages across late summer and autumn 2017. The listed, heritage aspects of the project were handled by architects 3DReid, with whom Goddard Littlefair has collaborated on all previous PRINCIPAL projects.

Standout amongst the new work is the stunning destination restaurant and cocktail bar, BABA, which offers a boldly unconventional menu of simple, fresh, tasty small plate mezze dining. The restaurant and bar, with its own street entrance, has a strong and unique design personality which incorporates nods to the building’s history and the Levantine-inspired food offering.

All-day food and beverage space The Garden is similarly standout in the building’s central courtyard with a new glazed roof. With open views of the sky, the light-filled space provides the hotel with a much-needed heart and allows comfortable all-year-round usage. The design for the space was inspired by the great hothouses, orangeries and nurseries of grand, historic country estates.

No two rooms are the same in this great collection of 199 rooms, including 18 suites. The bedrooms are spread across three locations – the old block; the new wing and the ‘wee hoose’. The design treatment for all centres on comfort, colour and character, with fun and eclectic ‘salon hang’ artwork in each room, for example, ranging from the contemporary and abstract to cultural illustrations and highland animals, treated with a touch of irreverent wit. Art consultancy ARTIQ also sourced accessories for the rooms, from cocktail shakers to small succulents. For the corridors, vintage drink and advertising posters sit alongside animal prints and maps. 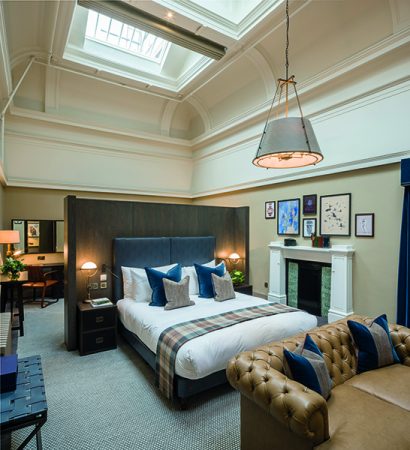 The old block guestrooms make the most of period details, such as refurbished listed detailing and cornicing. The overall design treatment is a balance between tradition and a more youthful, contemporary feel. The new wing guestrooms are more uniform in layout and considerable effort was made to ensure they had the same sense of character and uniqueness present in the more historic areas of the building. The ‘wee house’, which is like a mini hotel-within-a-hotel spread over four storeys, has bedrooms with a similar feel, but with a unique bathroom treatment, featuring roll-top baths, marble washstands and tiles, as well as Victorian-style, chequerboard floor tiling in a herringbone pattern from Fired Earth, along with timber skirting and a dado rail.

“It’s been an incredible journey for the entire team here at the hotel, but we’re incredibly proud to be able to reveal the results of our refurbishment. The new space focuses on bringing one of the city’s most impressive buildings back to life, offering guests the perfect blend of heritage and modernity. The refurbishment allows us to continue to push for excellence in the design and service we provide in one of Edinburgh’s most desirable locations.”