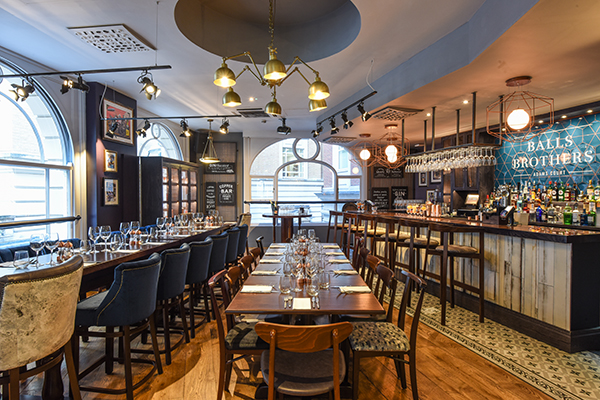 For more than 150 years Balls Brothers has been a staple of London’s hospitality scene, from humble beginnings as a wine merchant to its current collection of restaurants across the capital. Balls Brothers was founded on the principle of ‘quality first’ and this continues to guide the brand today.

Owned by Novus Leisure, Balls Brothers has continued to grow following the acquisition of 3 sites by Novus at the beginning of 2017. One of these sites was Adam’s Court, which opened at the end of September 2017 following a significant makeover by design studio Spatialized. Over the past few years Spatialized have worked on revamping a number of Balls Brothers venues and were ideally placed to overhaul the 3 floors of Adam’s Court. 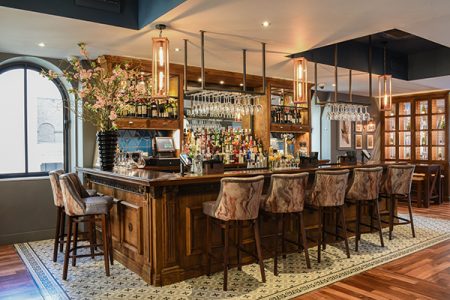 The project, which took approximately 6 months to complete, has been warmly received since completion. This was underlined at the end of 2017 when Adam’s Court was nominated for a Casual Dining Award.

“The award nomination is fantastic. It’s not something we’ve given much credence to in the past but we’re really proud of this site and the design,” said Lee Armstrong, Spatialized Owner. “We feel we’ve owned this from the start and feel it stands out as something different, particularly in London where there are so many different styles. It’s fantastic to get this recognition.”

Giving a guide around the space, Lee continued:

“The lower ground floor is the drinkers bar for want of a better word. One of the first things you see are the craft beer tanks which were one of the key things we introduced. There’s no beer cellar at this site which is a pretty fundamental problem for a bar! The craft beer tanks feed all three bars on the three different levels. The new ground floor bar is very traditional because that’s what Balls Brothers is about. There’s a heritage and quality about the Balls Brothers offering and that’s reflected in the finishes and the design.”

Marble, glass, brass and copper have been interwoven into the design at this level. From here you walk through the site to a staircase that links all the floors, and the design, together. Lee continued:

“The first floor is again another bar. One of the key things the client asked us to do was to create a cohesive design that worked for all the different floors but also allowed for them to be treated separately. The first floor had to be flexible and therefore has hinge screens that rotate 180° and give the ability to have small groups or one big party room. The bar design is the same with some geometric tile patterns.

“Going back into the staircase there’s some beautiful sign writing on the wall and detail work around the mouldings. The second floor is where a lot of the design elements we’ve evolved for Adam’s Court are located. The problem the site had originally was that the top floor was always viewed as restaurant only as far as customers were concerned. The cohesive design brief meant this needed to be a space to drink as well.”

The third floor is still predominantly a restaurant with an open kitchen but a wine cellar has been incorporated, which is a beautifully glazed feature. There’s also a new bar, a mixture of seating and some more private dining.

One of the main aims of the new design was encouraging customers to use all three floors regardless of whether they were simply having a quick drink or a meal. Since opening, this has proved to be one of Adam’s Court’s most successful elements and will be repeated at Canary Wharf site opening later this month. 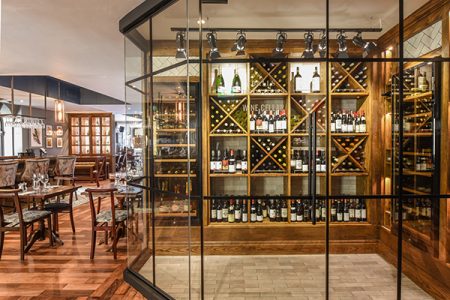