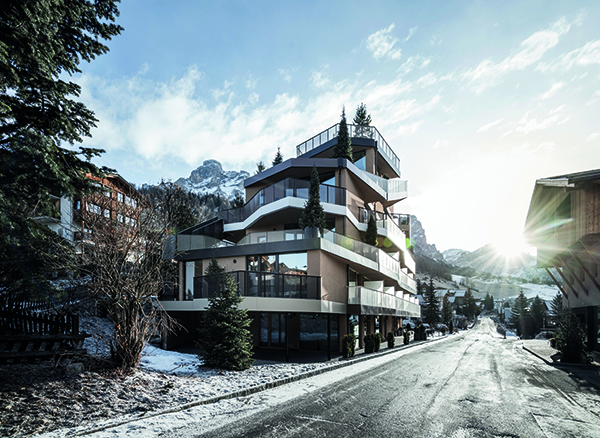 Taking inspiration from its stunning landscape, Tofana is a modern, designer hotel in the Dolomites. The 4-star hotel was completely refurbished in 2016 and is the ideal destination for explorers to base themselves before venturing out into the natural surroundings. 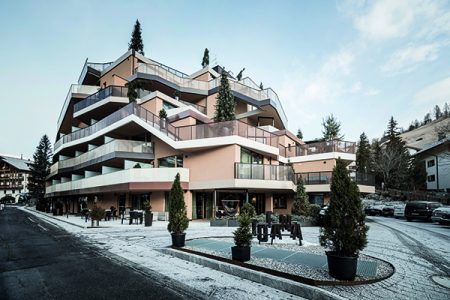 The traditional family establishment was founded in 1933 and is currently under the direction of the third generation. The most recent refurbishment was completed for a December 2016 relaunch and features a number of bold and unique features that make the venue standout. This was recently recognised at the World Architecture Festival Awards, where the hotel was shortlisted in the ‘Hotel’ category.

To carry out the redesign, noa* network of architecture was appointed the task of transferring the athletic spirit of the owners into the entire building. Günther and Verena Frena’s enthusiasm for sport played a decisive role in the design of the new hotel. From mountain biking and snowboarding to yoga and pilates, an active personality is prevalent throughout. Externally, the design reflects the shape of a mountain peak.

An important element of the hotel is its relationship between the interior and exterior. Terraces and balconies are prevalent throughout to help maintain a balance and a flow. Spacious window surfaces and the terraced structure allow light to penetrate deep into the interior of the building. The terraces are merged by vertical elements in the form of stairs and ramps and are drawn up like a path winding up and around the building to the roof with a ‘summit cross.’

Densely planted coniferous trees and plants that wind upwards, characterise the appearance of the façade. The building becomes an integral part of the surrounding natural backdrops, whereby the compact building with its irregular, asymmetrically designed shape and the many edges acts like an upwards tapering rock formation.

Following the motto “never stop exploring”, the concept of movement and the infrastructure in the new Tofana Hotel, follow the principle of a climbing route, which can be traversed by the visitor. The nature and the mountain serve as a stage for various places to linger and relax.

Various lounges and restaurants can be found on the ground floor, always following the alternating natural landscape of the Badia Valley: furniture and sofas in blue, green and brown tones suggest alpine meadows, biotopes, moss forests or rock caves. The furnishing is flexible; the details are thought through down to the smallest detail and made by local craftsmen. 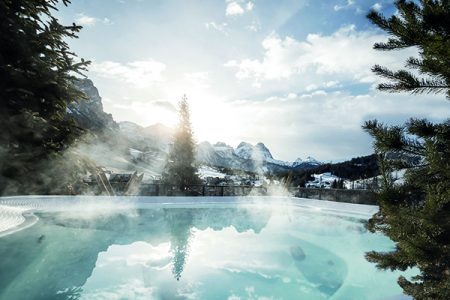