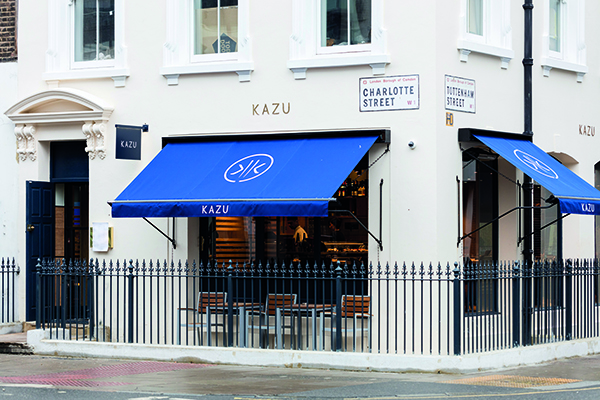 Contemporary Japanese cuisine has enjoyed an upward trend within London’s hospitality scene in recent years, with the city embracing a taste of Japan.

Kazu became the latest addition to the scene when it officially opened in January 2018. Kazu, which translates as ‘peace and harmony’ in Japanese, offers diners a modern, authentic and refined take on the traditional bar snacks and drinks offered in Japan. Kazu serves a selection of handmade sushi and sashimi dishes as well as a range of sakes, beers, wines and spirits to be enjoyed alongside. 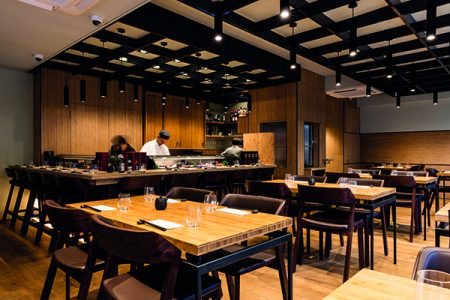 At the heart of Kazu is executive chef and partner Dham Kodituwakku – known simply as Kodi – who is able to call upon 30 years of industry experience. Having spent the first 8 years of his career honing his craft in Japan, Kodi has since worked in some of the most well-known Japanese establishments in the world.

His most recent role was head chef at Chisou in Mayfair, where he worked for 15 years before partnering with entrepreneur and lover of Japanese cuisine, Avinash Mirchandani, to bring Kazu to the market. Matching Kodi’s vast experience, James Engel and his team at award-winning architects Spaced Out were tasked with designing Kazu. James has a longstanding association with Japanese restaurant interiors having worked on a number of different Japanese restaurants over the last 15 years. He recently spoke to Premier Hospitality about the project:

“They also didn’t want to do something too large. They were still looking for a unit when I came on board and I suggested a corner unit would be good, which they did eventually find. It’s a stunning corner space on Charlotte Street so they’re in a really good location.

“It means a great deal to have worked on this project and helped bring the dream of the client to life. From a design point of view, for the practice this was a really strong continuation of our passion for Japanese architecture.”

The design represents a calm and welcoming nature and includes high quality lighting, softly lit materials and light coloured wood. Working to a relatively strict timeframe, Ecsec acted as main contractor for the work. The 65 cover space includes a 12 seat private dining room which complements the main restaurant. First time visitors to Kazu should expect to be amazed by the vast selection of dishes on the menu, each one expertly designed and created by Kodi himself. This includes Seared Fatty Tuna with Pickle Wasabi, Wagyu Beef Steak, Black Cod with Miso, Deep Fried Soft Shell Crab Sushi Rolls and Rock Shrimp Tempura with creamy spicy sauce.

Initial feedback on Kazu has so far been positive, with customers enjoying a high quality Japanese experience in a beautiful setting. To find out more, please visit kazurestaurants.com.