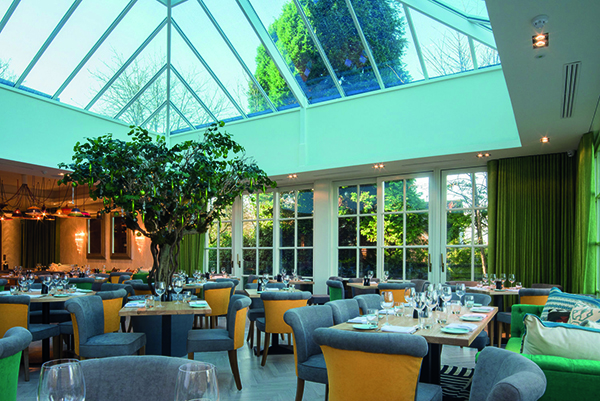 The 19th century country house hotel, which is in Cheshire’s most desirable village, opened its new bar and restaurant which were designed by Carroll Design, under the direction of General Manager John Scott, in January 2018.

As part of the makeover, Alderley Edge Hotel has been completely transformed to reposition itself as Cheshire’s number one boutique hotel. A new entrance and reception leads through to a modern, stylish, open plan bar and restaurant.  The look is bright and inviting with an eclectic mix of colour, natural light and contemporary furniture.  Stylish new details include vibrant flamingo wallpaper in the bar area, eclectic light fittings and a lit tree in the main dining room.

The change in décor is matched by a change in menu and service standards, with a more relaxed and informal ambiance while maintaining the three AA Rosette standards that the Alderley Edge Hotel is famous for. Dishes on the new menu include truffled wild mushroom risotto with tarragon and crème fraciche, steak and ox cheek suet pudding with vichy carrots and local farm pheasant, celeriac hash and gingerbread sauce.

John Scott, General Manager at Alderley Edge Hotel, said: “Our challenge is to realise the vision of the Lees-Jones family, who own Alderley Edge Hotel and to reinforce the hotel as the best boutique hotel in Cheshire.  It’s not just about the décor and services but we are aiming to create a modern and welcoming space for people to escape, relax and enjoy beautiful food and drink.  It’s a fantastic evolution that has evolved over the 30 years since JW Lees first acquired the hotel.”

This undertaking marks the first phase of a £2.5 million refurbishment with work continuing on the hotels bedrooms and function rooms, which are receiving similar investment. Work is due to be complete by Easter 2018.

William Lees-Jones, Managing Director of JW Lees said: “Opening the new bar and restaurant at Alderley Edge Hotel is our first major investment in our 190th year. Alderley Edge Hotel is our most prized asset and it is our aim to be best in class, with a flagship hotel that we can be very proud of.  JW Lees is a lot more than a just a brewery and our investment in hotels and inns continued to grow with major developments planned for 2018.”

JW Lees is a family brewery company, founded in 1828 by retired cotton manufacturer John Lees. JW Lees are based in Middleton, North Manchester and own JW Lees Brewery, JW Lees Pubs, Alderley Edge Hotel, The Trearddur Bay Hotel and Willoughby’s Wine Merchants. JW Lees are a sixth-generation family business employing over 1,100 people, 140 at the brewery and site in Middleton Junction and 1,000 in 36 managed pubs, inns and hotels. JW Lees lease a further 107 pubs to their pub partners. 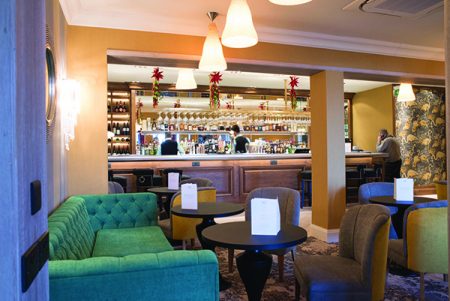