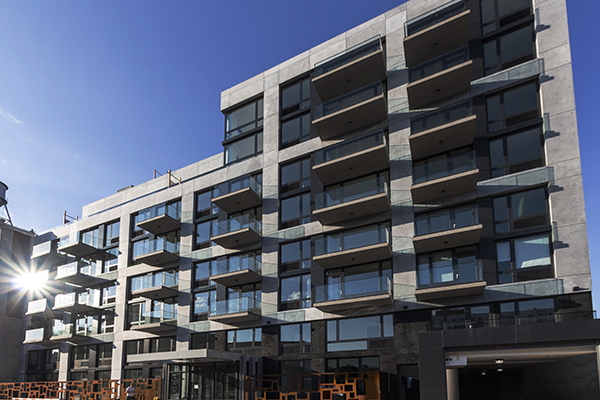 An outstanding, innovative and ‘brave’ project shortlisted in the Concrete in Architecture category of the WAN (World Architecture News) Awards 2017, is a scheme involving the construction of a new block of 86 apartments known as 670 Pacific Street in Brooklyn, New York, United States.

The WAN Awards recognise and celebrate excellence and innovation in architecture across all sectors and span all continents.

Speaking of the scheme designed by Kutnicki Bernstein Architects, and constructed by NY Developers and Management Inc., awards judging panel member Elaine Toogood said the project is: “Very brave and it’s generated a lot of debate about the nature of concrete and architecture, and the fact that what it brings to the scheme is not what we’d conventionally think.

“It’s not the structure, it’s not massive so that’s a challenge and that’s the reason why we want to commend it. The composition of the facades and the balance of them with the use of other materials shifts our understanding about what those materials are bringing to it. The glazing is the heavy bit, when has that ever happened? The concrete is the light bit!” 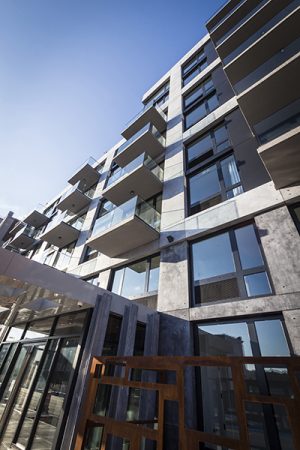 As a nod to the nearby Corten cladding for Barclay’s Arena, 670 Pacific employs a Corten fence water jet cut from a unique digitally designed pattern. This standout fence along the property line permits individual front yards on the ground floor.

In addition to the apartments, the building also incorporates a lounge, lobby and ground floor terrace, a gym and a roof deck, as well as parking for 43 cars.

Daniel Bernstein of Kutnicki Bernstein Architects said: “As a luxury rental, we designed 670 Pacific with a significant amount of glazing on the facade.

“We focused on the thermal envelope in order to meet and exceed the New York Energy requirements.  We used double glazed insulated windows and the opaque areas became an opportunity for thick insulation.  We desired the industrial look of concrete to compliment the context, and researched for a product that would deliver in aesthetic while not compromising on thickness.

“The IVANKA panels achieve a rustic look with a lightweight product. The result is rigid insulation wrapped by concrete panels, creating a thick look that is natural to concrete.”

Challenges of the project included the fact that the panels were designed in Hungary and although they are being used in Europe, it was necessary to have them tested to confirm they would perform to New York City standards.

The Corten fence also posed a challenge as the NYC Building Code requires a front fence to be 50% transparent. This was worked out digitally with a script and the design had to be composed to provide structural integrity.

Daniel Bernstein concluded: “The 140 foot façade seamlessly invokes both the industrial character of the neighbourhood sited to the west of the adaptive reuse of the old NY Post Printing Plant and Distribution Centre, so that the building provides a harmonious integration and enhances the streetscape.

“The project gave us a chance to work with a great client in a prime location. We were able to work with the context and create a building that both our client and our firm recognise as an enhancement to the neighbourhood.

“Our Firm is very excited to be nominated. We respect how wide-reaching the WAN Awards are and look forward to entering more projects in the coming years.”

The project commenced in 2013 and was completed in January 2017.