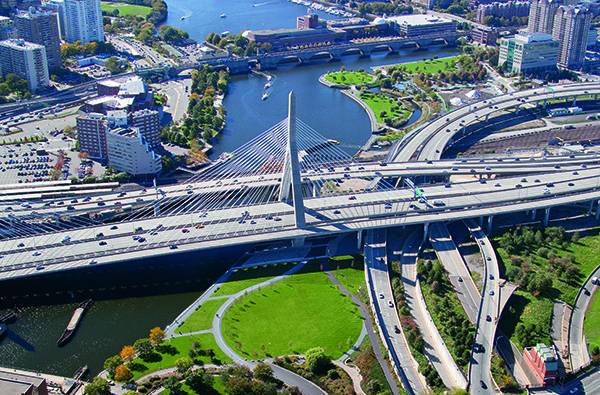 A mammoth project, over a decade in the making, has transformed a derelict riverfront area into a vibrant public park. North Bank Bridge Park is located under the Zakim Bridge in Boston, MA, on the Charles River waterfront.

Inhospitable and inaccessible, this area of land was once labelled ‘The Lost Half Mile’. North Bank Bridge Park now links the riverfront with Boston Harbour and since opening in 2012 has proved hugely popular with pedestrians, joggers, cyclists and skaters. As a member of a Joint Venture design team, CRJA-IBI Group was responsible for creating this final piece of the waterfront park system in the Charles River Basin. The complex project, which overcame both public and client apprehension, includes a number of interesting and imaginative elements.

Vertical light columns were designed in collaboration with a public artist reflect the verticality of the surrounding highway viaduct piers and welcome the public to the park’s focal point, the Underbridge Plaza. Four multi-use paths converge in the Plaza which includes granite seawall blocks for seating to enjoy stunning views of the river, downtown Boston and the bridge overhead. Granite was one of the major elements used on the project.

Structural Stone, LLC, one of N. America’s leading dimension stone fabricators, fabricated all of the new granite items for the North Bank Bridge Park Project.  They fabricate most types of natural stone with a specialisation in regional granites.  Proximately located in RI, Structural Stone was an ideal candidate for this project as well as their equipment being well suited for cubic projects such as this. Jeff Hartwell, V.P. Operations from United Stone & Site Inc. who installed the stone work, adds that repurposed granite from the Mass DOT stock yard was used for riprap steppers and seawalls along the canal.

CRJA-IBI Group also collaborated with the bridge designer and structural engineers on the design of a sculptural multi-use pedestrian bridge crossing over an active commuter rail line, the Miller’s River, and a commercial boat launch to connect with the Underbridge Plaza. CRJA-IBI Group established the S-curve bridge alignment to seamlessly flow into the curvilinear paths leading to the bridge from the east and the west. The east approach ramp was intentionally aligned to focus views toward one of the massive legs of the Zakim Bridge’s dynamic north pylon.

John Amodeo, a Principal at CRJA-IBI Group and Project Lead for North Bank Bridge Park, spoke to Premier Construction about the success of the work:

“Our aspiration is to work on projects that will have significant social, ecological and aesthetic benefits. Fewer projects achieve that better than a public park and fewer public parks achieve that as well as an urban park such as the North Bank Bridge. A park such as this is extremely important to us to work on because it’s going to benefit the largest number of people and it’s going to transform an area that was previously inaccessible, industrial waterfront into an area accessible to the public with a functioning ecosystem of plants. To do so all in a way that creates a welcoming, safe and fascinating gathering place for people is the best kind of project we can hope to work on.

“It was a real privilege to work on this project. It was definitely a labour of love and took twelve years from start to finish so a lot of other projects came and went but it was very important to keep our focus on this project to make sure it was a success.” 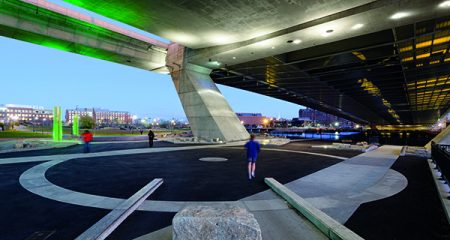 “Industry recognition, in my opinion, is the highest honour you can receive. To receive recognition from your own peers is an honour that is unsurpassable. Your own peers are going to be the harshest critics because they are so knowledgeable about the opportunities available and the strategies that could be used to meet challenges.

The nomination is a testament to the perseverance of John and his team in seeing this special yet challenging project through to the end.