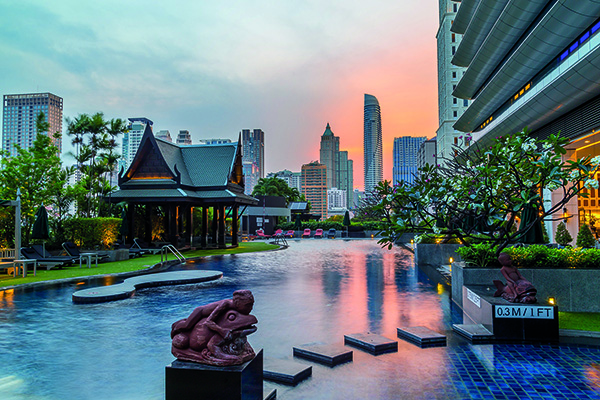 The Athénée hotel, a Luxury Collection Hotel, in Bangkok, is one of the most luxurious and prestigious addresses in the captivating city.

Renowned as the most luxurious hotel in Bangkok, the hotel was remodelled in 2015 and undertook an extensive renovation of its common spaces and 374 guest rooms. The transformation also included a newly redesigned city lagoon-styled swimming pool area for leisure and relaxation, brand new bar and restaurant.

The brief for remodelling the hotel was described as “sensitive and demanding” given that the hotel is built on the grounds of the Kandhavas Palace, the former royal residence of Princess Valaya Alongkorn until she passed away there in 1938. 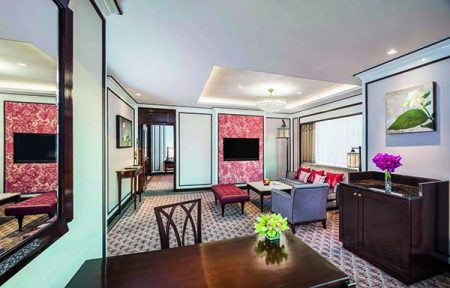 Work on the hotel’s transformation was undertaken by Niratt Design Corporations Co Ltd who were advised by the hotels owner Khun Wallapa Traisorat and Starwood Hotels & Resorts, owner of Le Méridien brand.

The new look and feel of the hotel has been described as ‘Thai Colonial’ combined with the modern world, defining ‘Thai Transitional Luxury.’ Carefully selected colour palettes, artwork and Thai panels all result in an extremely impressive hotel interior concept.

Khun Wallapa, an interior designer herself, was passionate about having the designs relate to the fascinating history of the hotels landlord. She said: “Our designs perfectly reflect this land plots royal roots, especially the history and stories of the princess, while interpreting them through a contemporary lens.”

As guests arrive at the hotel they automatically sense an air of Thai traditional nobility from an era where exquisite luxurious contemporary design is blended with traditional Thai characteristics. The design of the Royal Club guestrooms and suites is influenced by Thai royal ceremonies that took place in the royal palace, while Athénée guestrooms and suites represent the summer palace.

As operator of the hotel, Starwood’s corporate input proved equally indispensable in ensuring that the highest standard of guest comfort infuses every element. In particular its experience in structuring guest rooms to assure ample space and specifications of facilities fully equipped with modern technologies for discerning travellers ensured that five star standards are consistently met and exceeded.

The hotel was also one of the first to be certified ISO 20121 – a certification based on sustainable meeting practices and incorporating systems so an organisation can be more socially responsible.

Hotel General Manager Ms. Choo Leng Goh said: “Our suitability ethic is tightly woven into the award-winning design by limiting waste that seamlessly repurposed elements of practical distinction from the old design into the new understated chic, including much of the furniture. Moreover, all design, craftsmanship and workmanship are 100% home-grown in Thailand.”

Following its refurbishment, the hotel was announced as the winner of the Best Hotel Interior Thailand award in the prestigious ‘Five Star Asia Pacific Property Awards’ 2015-2016.

“The award recognises the conceptual brilliance of an extensive and ongoing remodelling project that has transformed out guest rooms,” explained Ms. Choo Leng Goh.

The Five Star Asia Pacific Property Award was presented to the design team in Kuala Lumpur. The judging panel comprised of over 70 highly respected design experts from all over the world and was chaired by three active members of the House of Lords from the UK Parliament who scrutinised hundreds of entries.

Khun Wallapa added: “We are all delighted that the prestigious awards panel appreciated our perspectives and the way we have executed things.”

Khun Niratt concluded: “I would like to thank everyone who gave their invaluable input to this project and shared their inspirations and ideas. I am delighted with the results and thrilled to see it recognised with an equally authentic and prestigious award.” 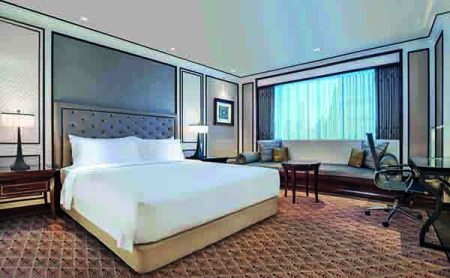