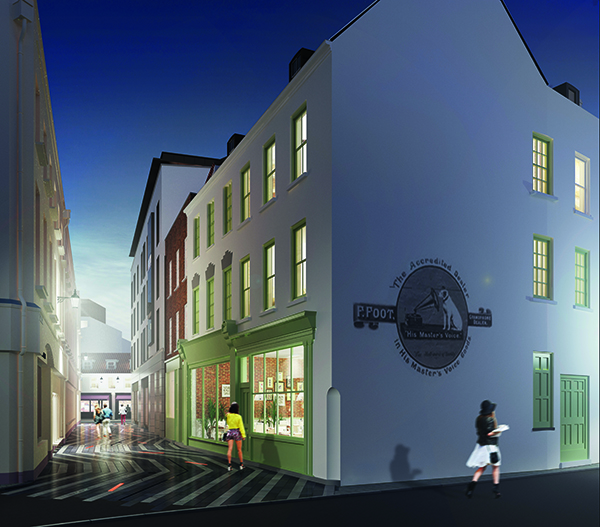 One of Jersey National Trust’s largest capital projects to date, is the refurbishment of three crucially important historic townhouses in Pitt Street Charing Cross, locally known as the Foot buildings and named after the Foot family who lived and worked in two of them.

The buildings, located at numbers 4, 5 and 6 Pitt Street, were purchased by the Trust from the Channel Islands Co-operative Society for just £1.

Main contractors for the project are Camerons Construction; project designers are Antony Gibb Ltd, who specialise in projects involving historic buildings and have a long working relationship with The National Trust for Jersey.

Internally these buildings retained original architecture and joinery detail which has been preserved, giving a valuable insight into the island’s cultural heritage.

Numbers 5 and 6, where the Foot family resided, are likely to have been built in the 1830s. Each property is three storeys high and three bays wide, constructed of rendered brick, with the principal elevation lined out to imitate ashlar. Originally domestic, the ground floors were later converted to retail, originally as two shops, before being opened up into one large space.

As rooms were gently stripped back, the history of these buildings began to reveal itself. On the ground floor, a brick culvert where the town sewer used to run, lies immediately below the timber floorboards, whilst remnants of 19th century wallpaper were also found behind the shop fittings.

Upstairs the properties were fitted with reeded architraves, bullseye mouldings and mahogany handrails. Original fireplaces and surrounds remained in situ in most other rooms.

Number 5 is a far more modest three storey, three bay wide dwelling constructed of brick in English bond, with an attic set behind the parapet. The building is likely to have been constructed in the early 19th century. A shopfront with its own entrance was inserted in the 19th century.

Internally, the building had a far more modest layout but still shared similar joinery details to numbers 5 and 6, with reeded architraves and bullseye mouldings.

Antony Gibb, said: “The buildings had been abandoned for around 20 years and were very dilapidated. They were infested with pigeons and droppings, and all had broken windows and leaking roofs, wet and dry rot, collapsing back walls, dropped beam ends and damaged floorboards. At the same time, the buildings were full of original features such as fireplaces, skirting boards, doors, ironmongery, staircases and coloured glass – all of which were retained and repaired.

“We carefully removed all the roofs and repaired the timber structures, re-built the granite masonry and brickwork where it was falling down – mainly on the back elevation; re-instated cast iron gutters, repaired all of the windows, whilst retaining all of the historic glass, including historic graffiti on the window frames and even some of the glazing. The historic shop fronts on all of the buildings are also being repaired and retained.”

The original internal layout was largely retained and all new modern services, including plumbing, heating and electrics, as well as kitchens and bathrooms for the apartments, were installed. Chimney flues were also re-lined and wood burning stoves were installed.

All of the original features were photographed and the original wallpaper discovered was carefully preserved and sent to The Jersey Archive for storage. Original grained decorative paint finishes were retained and restored.

“The most challenging element of the scheme – as with all historic buildings – was keeping the original features and character of these buildings whilst modernising them,” said Antony Gibb.

The Trust is holding an open day for the public to view the completed scheme in late April.