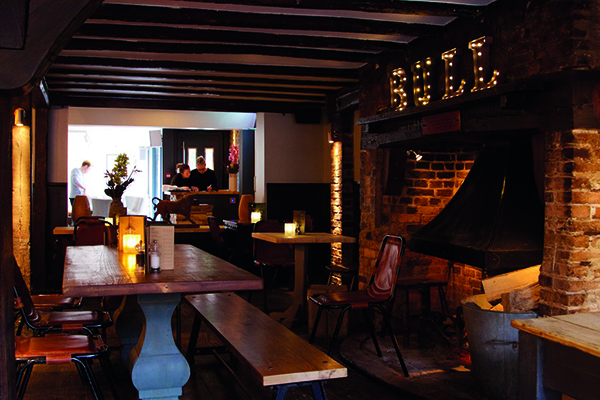 Located in the village of Ditchling, in the South Downs National Park, The Bull pub boasts a rich history dating back centuries. Named ‘Great British Pub of the Year’ at the Great British Pub Awards in 2016, The Bull recently undertook a £1m expansion project that will help enhance its offering.

Included within the work was the creation of 2 new dining areas adding approximately 46 covers, the conversion of the 18th century flint barn into a new commercial kitchen 3 times the size of its predecessor, the addition of 2 new guest rooms bringing the total to 6, landscaping work and a new car park. Over 8 years in the making, the project has been sensitively managed at every step due to the pub’s Grade II listed status and its location in a conservation area. 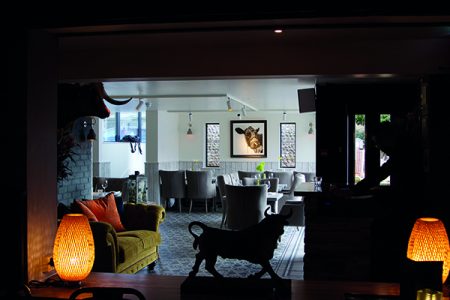 Premier Hospitality recently sat down with owner Dominic Worrall to find out more about the work and what it means for The Bull moving forward:

“The pub was bursting at the seams and then we won the ‘Great British Pub of the Year’ about 15 months ago, which cemented where we thought we were and where we were heading. We have high occupancy rates and we had a no booking policy when it came to dining to help retain a pub feel. That was important for the authenticity but obviously we proved to be so popular that the policy was snarling up the queues. It didn’t seem to put people off but with the new dining rooms we’ve switched to an online booking system. We can accommodate the extra dining in a more orchestrated and organised manor.

“The two new dining rooms came about through the conversion of the previous kitchen and a new link extension. This extension links the 16th century inn through to the 18th century Flint barn where the kitchen is. Working with conservation we were very much guided to make sure that the extension was appropriate to modern requirements.

“We didn’t want something that would be a pastiche with fake beams because it would undermine the integrity of the originality we already have. What we’ve ended up with is a modern structure with glass sliding doors and a zinc roof. It’s deliberately light and airy in its feel because we wanted it to be a contrast to the old part of the building.”

Work to the original elements of the building, such as the historic bar that dates back to the 16th century, focused on upgrades and making them fit for modern hospitality demands. On the surface looks may appear the same but minimal modern touches have been added behind the scenes.

Moving upstairs, central to the overnight accommodation is individuality. It was important that the rooms did not have the same bland, corporate feel but rather reflected the individuality of The Bull as a whole. They are comfortable and luxurious with lots of textures and Farrow & Ball paint colours. They are places you can really relax into with modern features that have been discreetly hidden and are more than just somewhere to sleep.

Much of the work was carried out while the pub remained open or at least partially so. Major disruption was limited to one week at the end of November 2017 and a couple of days at the beginning of January. Every feedback on the alterations has been hugely positive with Dominic adding:

“The feedback so far has been really positive. I am absolutely thrilled because that’s the bit you dread the most and in this case we were evolving something that was already a success. The last thing you want to do is upset people and that was really at the forefront of my mind. Customers have been able to see the site evolving and they know what’s been coming.

“This was very much a personal project. I live in the village so this meant a lot. I was also very mindful that with so many pubs closing that we needed to make sure we invested and made it fit for purpose. It was important that if the pub was going to grow it needed to be invested in. I think what we’ve given is somewhere that will survive and remain at the heart of the village. We can look forward to future involvement in the community where we employ more people. It’s a hugely exciting time and I am really looking forward to the next few years.”

To find out more about The Bull, please visit thebullditchling.com. 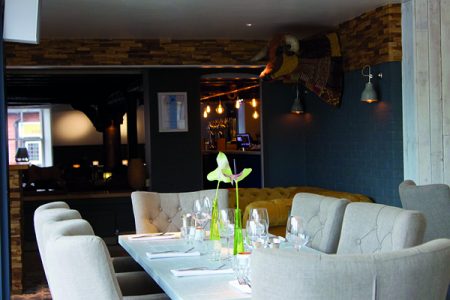 Peppermill Interiors is the UK’s leading stockist of quality domestic, bar and restaurant furniture. They specialise in contemporary and vintage furniture for the hospitality sector with their range including a variety of high-quality, unique products. As a business they also offer a bespoke service on a lot of their tables and benches, enabling them to cater to each client’s individual requirements.

After 20 years’ experience, the company rebranded from Peppermill Antiques to the more aptly named Peppermill Interiors. The company believes that the name change better reflects their shift in focus from antiques and reproduction items to the modern dining tables, luxury upholstered furniture and funky lighting that can be seen in their showroom today.

Peppermill Interiors have worked with a number of high-profile clients across the hospitality sector including Costa and Turtle bay. They have also worked with retail clients and have previously supplied stores such as Ted Baker.

The company recently worked on The Bull in Ditchling where they supplied a variety of tables, chairs, benches and armchairs. Some of the benches were upholstered to order for The Bull, therefore adding an individual edge to the completed look.

Commenting on the work, Aimee Hamilton from Peppermill Interiors said: “We love being involved in projects like this. There is a tremendous amount of satisfaction that comes with working on a project from beginning to end, tailoring it to the customer’s needs and then seeing the finished result contain so many of our products.

“We pride ourselves in being able to provide on trend furniture at competitive prices. We work to each customer’s budget to achieve the result they are looking for. We offer a high level of customer service, ensuring the customer is at the forefront of what we do every step of the way from the initial idea to aftercare. We like to think that is why our clients return time and time again.”