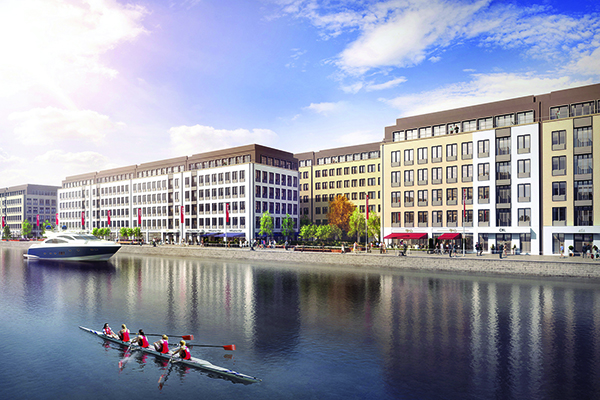 Andrew Matthewman, Director of Developments at ABP London told Premier Construction magazine: “The development is a mix use scheme of 70% offices, 20% residential units and 10% retail space. The site is split into six phases with phase one currently ongoing with a phase one completion date set for March 2019.”

The first phase is around 50,000 sq ft GIA of development with its opening coming shortly after the arrival of Crossrail, with a station near to the development in the Royal Docks costing approximately £1.7 billion to deliver and creating tens of thousands of new jobs.

Andrew added: “Phase one is running to programme with currently no major issues. We have incorporated significant offsite fabrication which has given us certain programme advantages. The foundations took longer than expected and this offsite fabrication has mitigated that delay. The structure and the façade went up very quickly as we are using pre-cast concrete structural elements and pre-cast concrete cladding panels.”

The offices in phase one of the development are split into two types – Type A and Type B. Type A is designed as compact, terraced offices set within two rows of blocks that run along the Waterside and the main thoroughfare. The size and high quality finish of the Type A buildings make them the ideal choice for a company locating its headquarters in London. Type B is a large, modern office building situated on the main public square and adjacent to Beckton Park DLR station. They offer availability of both single or multi use occupation with their sizeable open plan floor-plates situated around a compact central core to create an efficient yet comfortable work-space.

The retail element of phase one will offer a vibrant waterside of cafes and restaurants, plus a variety of retail choices available to not only satisfy local residents and the working population, but to also make the area a destination for shopping and leisure for those from further afield.

“I think this development is going to create a significant new business community in and around the Royal Docks,” said Andrew. “The nucleus of London is continuing to spread east along the Thames firstly with St Katherine’s Dock, followed by Limehouse and of course Canary Wharf. The Royal Docks are the last piece of the Docklands jigsaw to be regenerated and will follow the huge success of what has gone before.

“We are promoting a new business district for London, which will represent fantastic value for money. Our rents are a lot lower than at the likes of Canary Wharf and Stratford, so we will be offering brand new office space in what is still an increasing market.”

The whole project is targeting for completion in 2028. Phase 1 is under construction by Multiplex, who are working on behalf of CITIC Construction as main contractors.

Andrew concluded: “It is very satisfying to be part of the regeneration of a long neglected area of London. With these schemes that are very complex they have a long gestation period, so it takes a lot of effort in terms of planning and pre-development, so it has taken some time to get on site. At the minute there is a sense of achievement that we have brought it this far and are delivering on the ground.”