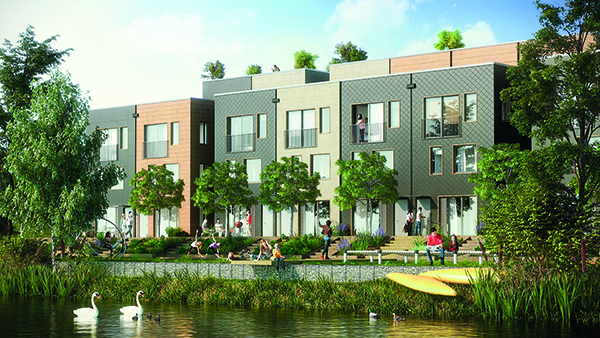 Developed by Citu, the Climate Innovation District in Leeds is a zero-carbon development that puts sustainability at its heart.

Rather than drab apartment blocks packed into the urban landscape, CITU are creating a community focused around parks and shared gardens, all along a river where otters, herons and Kingfishers live. The new homes are the first family homes to be built in Leeds City Centre in over 90 years and will bring open, communal spaces to allow children to play in a car-free environment, whilst the short walk into the city centre makes it ideal for those who work in the city.

Speaking to Premier Construction magazine about the development, CITU Managing Director Chris Thompson said: “From a city-wide context, the development forms part of the South Bank which is the biggest regeneration site in the region and its ambition is to double the size of Leeds City Centre. Within the development, we have divided it into phases and will be delivering around 520 homes, between one and four bedrooms, plus some commercial space, leisure space and there are plans in place for a primary school, with the emphasis being on delivering the highest possible sustainable communities. Already operational on site is Citu Works, our state-of-the-art factory where our timber-framed ‘Citu Homes’ are being manufactured. This vastly reduces the carbon footprint in the construction process and gives us certainty on quality and energy performance.”

The district has been designed by Swedish architect, White Arkitekter – who have been behind many of the progressive new neighbourhoods in Scandinavia – alongside Manchester-based architects Ollier Smurthwaite Architects. To create a development with a strong focus on communal living, the design uses private terraces that open onto communal landscaped gardens. The greenery and public space will create an area to relax, recharge and connect with neighbours.

Under-croft car parking means no roads break up the landscape and kids will be able to walk to the excellent nearby school without having to cross any busy roads. If you need a car then electric car charging comes as standard, making it easy to switch to zero carbon transport.

Solar Avenue is the heart of the Climate Innovation District, an intimate urban space that will open out onto a green. Each house along the avenue has its own rain garden, which residents can plant to give every home its own unique identity.

Chris added: “The big issues of tackling climate change is about cities and how we live in our cities, so we have to create neighbourhoods that are sustainable and where housing is desirable. How we deliver that is by creating low energy buildings and integrating that with different energy systems. On site we have renewable energy generation which is all delivered by smart technology and it is about creating that place where walking and cycling are the easiest way to get around.” 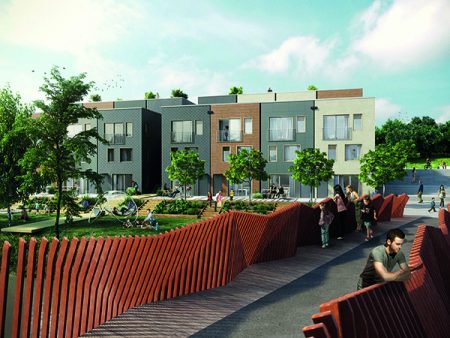 A bridge is also being built which serves as a link between the North and South sides of the city, connecting the development and linking phase one to the riverside cycle path.

“I hope the development brings a new typology to the city,” said Chris.” It is an ambitious standard of place making and I hope that creates a ripple effect through other neighbouring developments and raises the ambitions of other sites.  I think its immediate impact will be a lot of connectivity from other areas of the city. The bridge is a fundamental piece of the structure and will improve the connectivity of the city and different communities.  The change in demographic will also bring a whole different category of life to the city. A secondary school opened in the city centre in September 2016 and that brought a new age range moving around the city and adding the primary school will bring another age class and that will really change the feel of the city.

“As a business we want to tackle climate change by accelerating the transition to zero carbon cities, so we want to be making an impact with the developments that we do. This project has the opportunity to make a lasting impact on the South Bank and the wider city, so it is hugely important.”

The first homes at the Climate Innovation District were released for sale off-plan in November 2017 and the first homes are now being constructed on site with the first residents due to move in by July/August 2018.