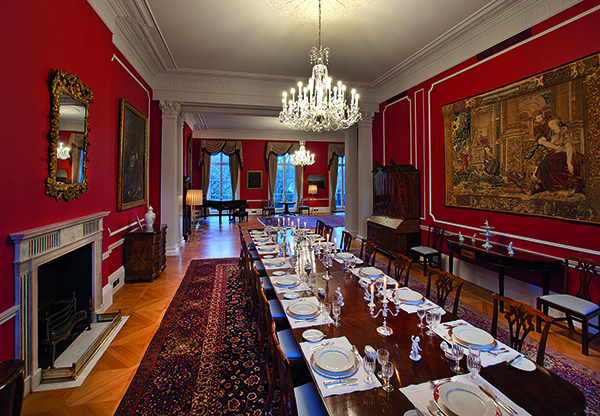 The project originally started out as a façade renovation with some cracks to ceilings to be investigated. However, the extent of remedial work required was unexpected. The scope of the project went from repairs and painting to stripping large parts of the external render, replacing lintels and recreating major decorative elements.

To complete the project substantial works were required to restore the impressive Grade I listed building to its former splendour. A new colour scheme was developed to refresh the rooms, including gold leaf to the decorative cornices of the grand stairway.

Commenting on the design and its features, Markus Seifermann from ÜberRaum Architects said: “The biggest design feature is the preservation of the historic state room interiors. These had to be stripped back completely to carry out necessary repairs to the ceilings and electrics. Moulds were made from original decorative features, which were then recast and reinstated.

“Despite upgrades to the fabric and infrastructure of the building and the comprehensive strip out, the building retains its historic period detailing and character. It is further enhanced by a bold colour scheme to the rooms providing a perfect backdrop for furniture and artwork and a fantastic setting for events.

“ÜberRaum Architects also used this restoration as an opportunity to update the functionality of the building to a 21st Century standard, updating fire safety features, adding new trench heaters and introducing new mechanical and electrical systems to support LED lighting and internet capabilities. Additional insulation has been included to all floor voids as well as the roof, while a new heating system has been added through the entire building. To further keep heating costs down, double glazing features on all top floor windows and roof lights were also added.”

Due to the large infrastructure, all existing ceilings needed replacing with new Pilquet Acoustic Systems ceilings and new plaster mouldings to match existing decorative plaster work. This work was undertaken by Artisan Plaster Craft ltd, specialists in plasterwork who completed work on 11 differing rooms within the building. 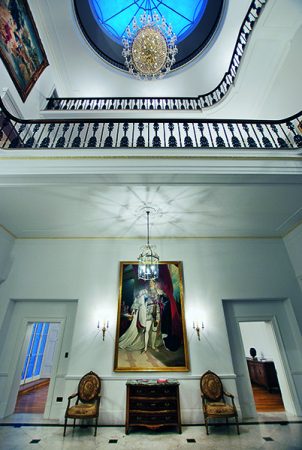 Work on the project began in October 2015 and was completed in September 2016 with the embassy remaining open and operational throughout the project.

Markus said: “During construction, the Residence building remained in occupation, while meeting high level security requirements. The building still had to function for the incumbent Ambassador, staff and occasional events so works had to be stopped due to noise or access restrictions imposed by the users.”

Since its completion, the project has been nominated for a 2018 RICS Awards in the Building Conservation Category. The RICS Awards showcase the most inspirational initiatives and developments in land, real estate, construction and infrastructure.

“It is fantastic to have the work, dedication and skills of the project team recognised by this award nomination,” said Markus. “It is also great for the client who provided both the finances and commitment to see the project through to the highest standards.

“The client was fully supportive that the works should be carried out for the long-term benefit of the building, supporting recommended improvements to enhance its long term use, in addition to the essential repairs and decoration required.”

The completion of this high-end refurbishment has been deemed a great success with the fully refurbished rooms now in use again.

Markus concluded: “The project is both prestigious in terms of the building and the client. It is especially meaningful to Daniela (my wife and business partner) and myself to be able to work on the German Embassy in the UK as we both originate from Germany.

“The project represents our substantial experience restoring a complex and large scale historic restoration. In 2017, it was shortlisted for the AJ Architecture Awards in the category ‘Heritage project of the Year.’ We are extremely proud to have been involved and of the result achieved, thanks to the support and expertise of the project team and client.

“The building continues to be an important part of our office, both professionally and personally,

as we continue to assist the client with the full refurbishment of the roof.” 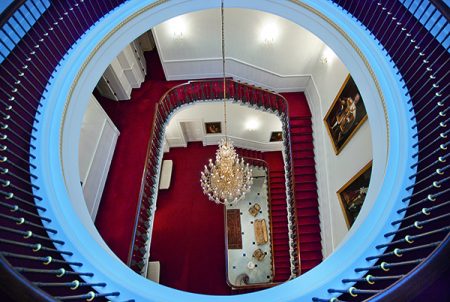