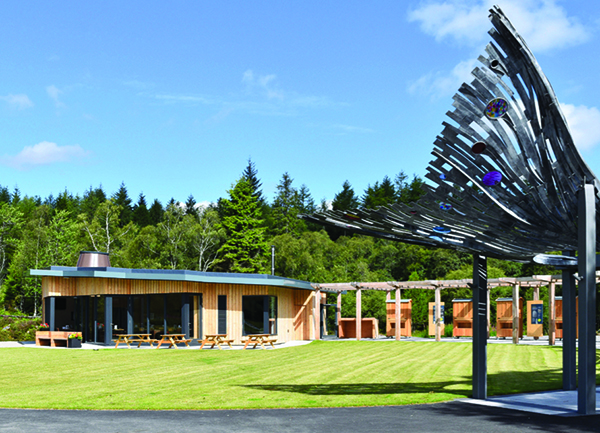 The Falls of Shin is a community owned visitor centre near the Scottish village of Lairg that opened to the public in May 2017. The centre was design by local architect Catriona Hill of CH Architecture and boasts a café, exhibition and children’s play area and provides access to a salmon leap waterfall and adjacent forest walks.

The previous facility on the site had been destroyed by a fire in May 2013 and was left untouched until 2014. Under an umbrella organisation, the Kyle of Sutherland Development Trust, the local community approached the previous owner and offered to buy the site in 2014. Work then began to secure funding and rebuild the site from the ground up.

Since opening to the public last year the Falls of Shin has proved to be a hugely popular destination for locals and tourists alike. It has also received significant industry recognition and recently received 3 RICS Awards 2018 nominations in the ‘Community Benefit’, ‘Design through Innovation’ and ‘Tourism & Leisure’ categories. The project is also part of a 25 strong shortlist for the 2018 RIAS Awards.

The design of the new centre focuses on creating outside spaces, which foster a sense of ownership and pride and can be used by the local community for free. Taking inspiration from the fish regularly seen leaping at the falls, the building is uniquely based on the concept of a salmon. At the heart of the facility, for example, is a central plaza which contributes to this community spirit. Where the previous facility discouraged non-paying visitors, public access has now been greatly improved. Picnics are welcome on the central plaza and all the play areas can be used for free. Access to the river has also been improved thanks to a rebuilt path to the waterfall viewing point. Strollers and wheelchairs can, with assistance, now make it to the river edge.

Sustainability is similarly important to the new design. Its flexibility means it can expand and contract to suit user demands and ensure excess energy use is not wasted. Falls of Shin also has its own electrical charging point for members of the public to use.

A funding portfolio amounting to approximately £1.4 million for the project was secured by the Kyle of Sutherland Development Trust. Seed funding for the original purchase of the land was provided by Highlands and Islands Enterprise (HIE). Development and capital funding was sourced from Big Lottery Scotland through the Growing Community Assets fund. The local wind farm funds managed by SSE and EON both contributed considerable funds, as did HIE, Highland Council and the Robertson Trust and Highland Council.

Since the building was opened to the public in May 2017, more than 100,000 people have visited the café. A two-year community project is also currently taking place from the building. A number of events have, and continue, to be organised by a development officer to increase footfall and provide engagement for the community. A large proportion of these events have an outdoor theme and take advantage of the building’s rural setting. One of the most recent events was a Christmas fair which provided a forum for local traders to display and sell their produce.

With its clever and engaging design, the Falls of Shin is already giving back to the community responsible for its rebirth. Alongside job creation the building has provided a sizeable tourist boost to the area. 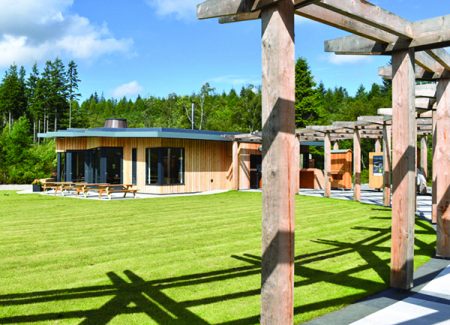 Run by Catriona Hill, CH Architecture is a small architectural practice in the Scottish Highlands. The practice is committed to value for money and design excellence, working on projects both locally and further afield.