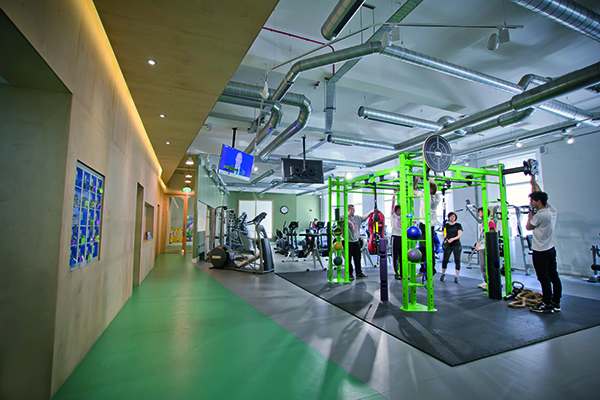 YMCA North Tyneside has been serving the industrial communities along the river Tyne for over a century, supporting successive generations through cycles of social and economic change.

YMCA North Tyneside offers a range of facilities and services for the benefit of the local area, including a busy community gym, supported housing for homeless young adults and a range of activities for youth on and off its premises. Based in the heart of North Shields, the charity’s longstanding home has undergone significant changes since 2016 to improve and enhance what it can offer. The last phase of this redevelopment was completed in November 2017 and like the work that preceded it, has been warmly received.

Each phase of work was designed by Grace Choi Architecture. The practice has since been recognised for its work with a RIBA North East Award nomination and was longlisted for the RIBAJ MacEwan awards 2018.

Having previously received RIBA Award recognition, Grace is no stranger to acknowledgement from her peers. Reflecting on the YMCA nomination, Grace commented:

“It’s wonderful to recognise that great architecture can be achieved for the common good, even within the constraints of a tight budget. Completing a project like this is so rewarding when it’s full of visitors, enjoying the home cooked food in the café or joining a group of elderly in the gym! The place has become a thriving community.

“This week I heard about the learners that have gone on to secure jobs in catering and a young adult in supported accommodation who has been accepted at university and is no longer homeless through the support of the YMCA. The nomination gives this community pride, not only in what’s being achieved but in the place it has become.”

In July 2016, the refurbishment of the health and well-being areas at YMCA North Tyneside was completed. This included the introduction of a new state-of-the-art gym, 2 free weight rooms, a flexible multi-sports room, multi-use sports hall, associated storage rooms, sub-lettable meeting rooms, spill out spaces and a fully equipped training kitchen.

This was followed a little under a year later by the refurbishment of an old vacant bank to form a new entrance, reception and café within the building. Completed in May 2017, the new café is linked to the training kitchen via a dumbwaiter. The café has since acted as a training facility for young learners to gain practical skills and knowledge in the service industry, working in a live environment.

The most recent element of the redevelopment resulted in the creation of 6 additional supported accommodation units for young homeless adults on the third floor of the building. This helped increase bed space for young people aged 16-25 by almost 20%.

When considering materials for the work, important consideration was given to accommodating a footfall of 100,000 visitors a year. A palette of birch plywood was used for cladding while marmoleum flooring was used in the public areas. Ceilings and walls were also stripped back to reveal original and elegant features of the 1940s building. The exposed nature of services and infrastructure creates an honest and industrial feel that is reflective of the north east.

The impact of each phase of the refurbishment has been immediate. Membership of the gym across all ages has increased, with 515 new members under 25 years old, and this increased interest has helped make many new programmes and classes begin. The improved gym facility also has excellent disabled access. Similarly, the community café has proved to be a popular hub for locals and has played a significant part in increasing footfall through the building from 70,000 to over 100,000.

Defying the constraints of a tight budget, Grace Choi Architecture and the YMCA North Tyneside team have revitalised and enhanced an important focal point for the community. 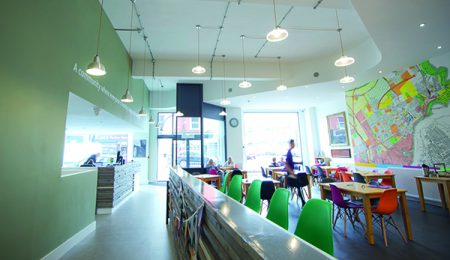