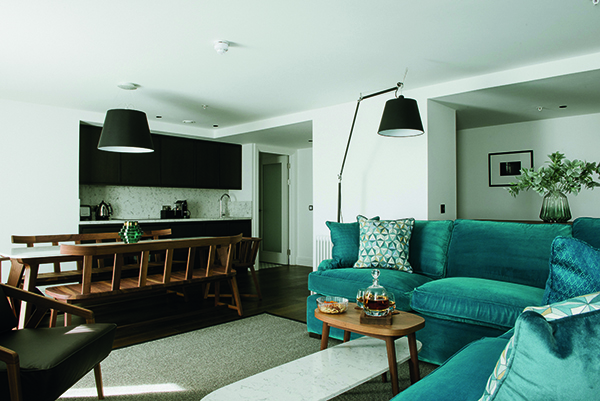 Scotland’s newest destination for the modern luxury traveller, The Edinburgh Grand opened its doors to guests on 1st June.

Housed within the former global headquarters of RBS, The Edinburgh Grand comprises 50 individually designed, fully equipped apartments. The venture, Lateral City Apartments’ newest property in the city, is part of Chris Stewart Group’s ambitious Registers development, a regeneration and redevelopment project which is set to transform a corner of the prestigious St Andrew Square.

Accommodating from one to six guests, the apartments come in a gamut of shapes and sizes, from uniquely configured Grand Studios, to the jaw-dropping three-bedroom, rooftop Penthouse with its astonishing 360° panoramic view. Old meets new as guests’ needs have been put at the forefront of the distinctive design led by Karen Brown, head of Interior Design at Chris Stewart Group. Ahead of the project’s completion, Premier Hospitality caught up with Karen to discuss the work:

“Essentially, the brief was to provide luxury 5* accommodation and to situate it within an existing building that used to be the RBS headquarters. Generally the building had been very well looked after. There had been some work done to it over the years by the bank and one of our first jobs was to assess what we could do to take it back to its former glory. That included taking away additions that weren’t part of the original listing. We would walk round the building, looking at the original plans.

“The Royal Bank of Scotland actually gave us a fantastic book which was written as an account of the building when it was first opened. It had details of all the contractors and various craftsmen that had been involved. It was a fantastic starting point from which to design the apartments from.

“The apartments are all very unique. Just given the natural layout of the building they are all going to be different. We didn’t want to carve up the rooms too much because some of the rooms have beautiful panels. For example, there’s a fantastic room which we call the Directors Suite that used to be the former luncheon room. Along with the accompanying smoking room we have formed that into one large apartment. It’s a stunning room and is the best use of the space.

“The starting point for the design was looking at all the individual rooms, their character, their original features and what suited them. We wanted to enhance them but not put in things from that period and try to recreate the same period.”

Amenities included within the apartments include smart televisions, Bose sound systems and intelligent heating controls. Each is also equipped with a fully fitted kitchen, kitted out with top of the range appliances from Siemens and Nespresso. Bathrooms are similarly impressive, with drench showers and oversized baths in addition to luxury beauty products courtesy of New York beauty brand Malin + Goetz.

The Edinburgh Grand is also set to be the city’s hottest new social hub, with a 170-cover bar and restaurant called Hawksmoor located in the former banking hall, a sleek new bar – The Register Club, a coffeehouse and an upscale hangout to meet and eat. The public spaces hark back to the glamour of the original American art deco styling thanks to the retention of period features such as the breath taking atrium, hand-etched windows and decorative plasterwork.

“It’s been an absolutely fantastic process, right from the start. It’s been a great opportunity to be able to work with such a great team. It has been a dream job, working on a stunning listed interior, developing a 5*, luxury interior for Lateral City. There’s nothing like it in Edinburgh and I’m just really grateful and delighted to have been a part of that.”

The Edinburgh Grand will set a new benchmark for luxury travel accommodation in the city. To find out more, please visit www.lateralcity.com/property/the-edinburgh-grand. 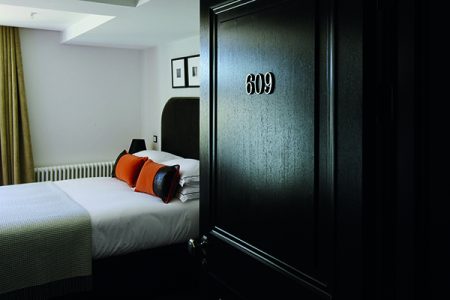