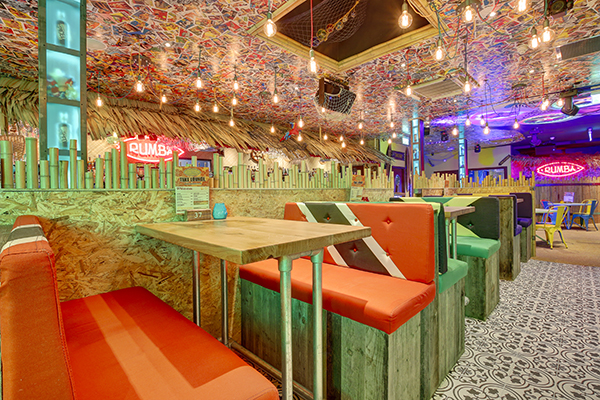 Life & Soul Ltd has opened a new and larger RUMBA Bar in Congleton.

Whilst incorporating influences from other RUMBA sites, the bar has a vibrant new image throughout and provides a food offering to customers – something not done by the company before.

Speaking to Premier Hospitality magazine, Life & Soul Managing Director Chris Carsons said: “RUMBA Congleton has a new look but incorporates aspects of other sites. It has a fish tank, LED and neon lights and thatching over the bar. Dawnvale, who worked on the project for us, really twisted the design on its head. There’s a Central American carnival feel, with skulls, UV paint and Day of the Dead motifs, that sits alongside the beach theme. Dawnvale’s design team created a bespoke resin floor for us, with pebbles sunk into it to give the impression of sand underfoot.

“We are also doing food on site for the first time. Before this site we were a five-nights-a-week operation but this one is a seven-day, all-day food operation. The only challenge we have is turning the site from a daytime food and family place to a late night party bar.

“Dawnvale manufactured a custom commercial kitchen for the project, tailoring the design to the kind of easy eats that would appeal to RUMBA’s clientèle: big pizzas, buckets of fries, chicken wings and sharing platters. The team installed a pressure-fried chicken oven and a bespoke pizza oven.”

RUMBA is located in the former Barracuda Smith and Jones Group site in the town centre. The new location was exactly what Chris and business partner Martin were looking for.

Chris said: “It is a big building that was undergoing repossession so we put in an offer and it went from there. It is a huge site with 400 capacity. We have two bespoke cocktail and ice-cream bars, eight stations and around 30 staff. We are right in the town centre and that is exactly where we want to be. Because Congleton is a town centre location, it has hundreds of things going on so we want to get in place before other people move into town.”

As well as sites in Congleton, RUMBA has a site in Macclesfield and credits their success on the under 21’s market.

Chris said: “We originally started with a chain of bars called DV8 and they were more cocktail, wine and sedated but we had an over 21s policy. We realised that we were turning hundreds of under 21s away who wanted to go out for a drink and a good night. That’s how the idea of RUMBA was born really – we created a Tiki bar concept in a building at the opposite end of town and refurbished it into a crazy, party, Caribbean club with fish tanks, barrels for tables, neon lights and a dance floor. It all just took off from there and was a huge success.

“We outgrew that site and bought another building in Macclesfield and that just boomed as well. With that site we won ‘Best Turn Around Pub’ in the John Smiths Great Pub Awards so once we won that we were on the radar.

“I suppose it started as a bit of a tongue-in- cheek laugh about having a bar but when it opened it was brilliant and really fun. If you come to RUMBA, with the intention of having a really productive day the next day, that doesn’t happen. The atmosphere really gets under your skin and you feel like you’re missing out if you go home. There is so much to look at, so many different types of people and it is so much fun. It is not pretentious – it is finished, precise, down to earth and looks great.”

Dawnvale MD, Neil Guest, commented: “We’ve worked with Chris on a number of projects over the years, so we were pleased to be invited back to provide a complete design, manufacture and installation service for RUMBA Congleton.  Eight weeks isn’t much time to transform a venue into something as ambitious as this, but we delivered on time and are thrilled with the results. The new RUMBA bar and restaurant is fantastic: a weird and wonderful blend of Miami and Mexicana in the heart of Cheshire.” 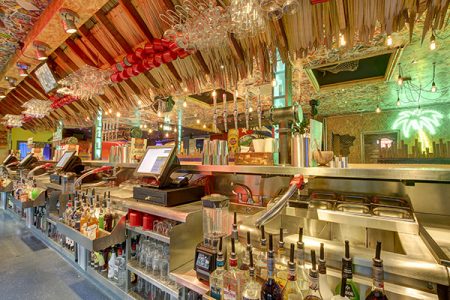