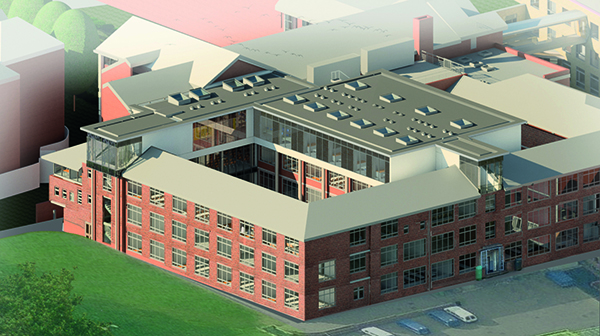 The Royal Grammar School in Guildford is currently undergoing a series of exciting redevelopment projects as part of a major Masterplan to improve the school’s facilities. The RGS is a historic town centre school, educating around 950 boys.

The Royal Grammar School Masterplan began in 2013 and is a 15 to 20 year development to multiple parts of the school. The current phase of works, phase 3, began in February 2017 and will be completed at the beginning of the next academic year in September 2018. Phase 3 is the most significant so far and includes the addition of a fourth floor extension to existing buildings as well as internal renovations.

The work has been designed by IID Architects with Neilcott Construction acting as the main contractor. Premier Construction recently spoke to The Royal Grammar School Chief Operating Officer Bob Ukiah about this latest phase of work:

“Although the original school buildings date back to the 1550s, our main school building is a 1960s red brick building that has been extended in bits and pieces over the past decades. The floor that we’re putting on top is much more modern with white render and glass. Most of the new floor is designed as state-of-the-art modern languages facilities.

“I would say there have been two big challenges on this project – the technical challenge of building it and keeping the school operating while this has been going on. We’ve had to manage the safety aspects as well as minimising the disruption to teaching.

“The school is always modernising its facilities. As well as creating the modern languages facility, the phase has other features such as a large seminar room and refurbished chemistry laboratories. The school is in the middle of Guildford so there’s no room to go outwards, anything we want to do has to be up or down. This will give us a lot more space and it will allow us to modernise teaching spaces.”

Once this development has been completed attention will then turn to the next phase of the masterplan. This particular phase will focus on constructing roofs for two large atria, which will create significantly more internal space.