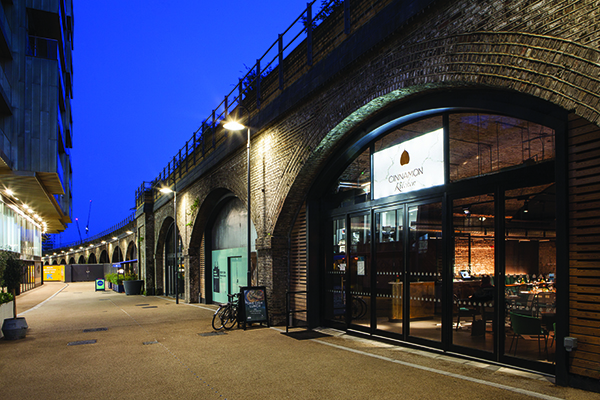 Cinnamon Kitchen – Spicing it up

A 4,700 sq ft Indian restaurant housed in a dramatic railway arch in the Grade 11 listed Battersea Power Station, Cinnamon Kitchen has launched, hot on the heels of the opening of the brand’s second site in Oxford.

Designed by Design LSM, with QSF Interiors as main contractors, the 120-cover restaurant includes a large destination feature bar on the ground floor, an open-plan kitchen, a semi-private chef’s table and a private mezzanine dining room overlooking the restaurant and seating an additional 20 diners.

There is also an outdoor terrace with sweeping views of the Thames that seats 12.

Drawing inspiration from the urban backdrop of the Power Station, the interiors are stripped back with an industrial vibe – including exposed brick walls, brass, timber and metal finishes, and a muted palette of teal, ochre and grey.

Carla Zaver, Senior Designer at Design LSM said: “We carried out two previous projects for this client, and they invited us to work on this really exciting site at Battersea Power Station.

“The brief was to create a casual, industrial, urban chic vibe in keeping with its location in the old railway arch, teamed with plush fixtures and fittings. It’s a great prime location – couldn’t be more iconic – and we were very happy to be given this opportunity.”

Because of the building structure, certain items could not be fixed to the arch itself, so a little more time was needed on the project.

The restaurant front is fully glazed and modern, incorporating doors which can be opened up, creating a crossover of the outside and inside space. On entering is the meet and greet area with an antiqued brass desk and cloakroom. To the right of this is the bar, where customers can enjoy a pre-dinner drink, and in the centre of the space are dining tables, with fixed seating upholstered in turquoise velvet.

Carla Zaver said: “The furniture is of a modern, Scandinavian style with monochrome concrete effect floor tiles and antiqued brass finishes. The original arch features the retained white painted brickwork, enhanced by the use of integral lighting behind the fixed seating, around mirrors and under-lighting the bar, creating a warm look. The back bar is also backlit so that it really glows and also features a circular mirror. Bar tops are in white marble.

“As you progress through the space, we have included fixed seating, with rich deep green painted panelling to the rear. This area also incorporates a feature open plan theatre kitchen with a gantry and seating for diners all around.”

The space also incorporates a new mezzanine level, providing additional restaurant seating, designed with an industrial look with open gauge mesh and wiring for the balustrades and uplighting to make it glow.

Carla Zaver concluded: “We have a very good working relationship with the client who is great to work with, and there is a lot of mutual respect on both sides. We felt privileged to work on the project.”

The venue is open for brunch, lunch and dinner, serving modern Indian cuisine. Dishes at the bar are inspired by spices and delicacies found on the Delhi Jaipur Pink City Express route.

The restaurant is also the first to offer food and alcohol delivery to residents in the immediate area. The bar operation is also a key focus, with urban-inspired, spice-infused craft cocktails.

“The Power Station was built in 1860 and has been closed for more than 25 years. We are excited to be a part of the urban regeneration taking place and to be extending the Cinnamon Kitchen’s brand reach south of the river.” 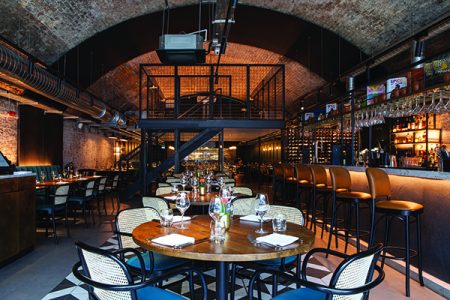