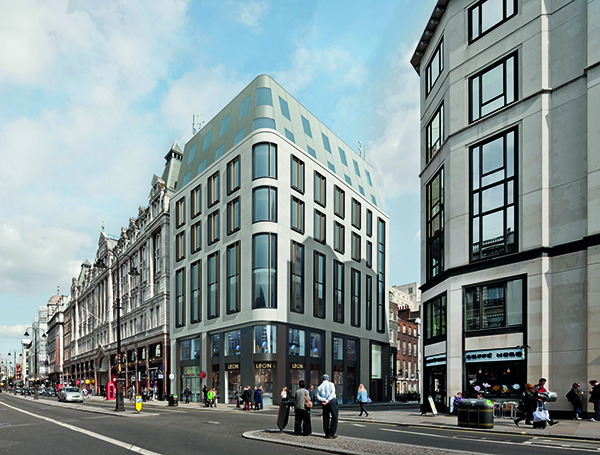 The first Wilde Aparthotels by Staycity opened on London’s Strand in March 2018. The 106-room destination offers a range of studios, superior studios and double rooms over eight floors including three sky level studios.

The task of creating the design of this new brand was given to the award-winning Heneghan Peng Architects. Co-founder Róisín Heneghan spoke to Premier Hospitality about the need to create a distinctive and memorable look:

“I think the idea of the bathroom as a curiosity box was a standout element. It was an idea that you create a framework of shelves filled with all of these different items. The rest of the room is fairly simple. Another thing is that the window forms a backdrop to the bed and is a backlit element that lights the entire room.

“The size of the rooms was definitely a challenge. We decided that we wanted the kitchen not to face into the room so when you’re sleeping you’re not seeing the kitchen. We had to get the organisation to work to have the contained kitchenette and still have enough room to move around. We designed a table that opens down so there are elements like that. The room also needed space for full suitcases to be stored under the bed.

“I think the feedback has been pretty good. The guys at Staycity seem to be quite happy with it.”

The venue was officially opened in April by Oscar Wilde’s only grandson, Merlin Holland. Staycity Group intends to roll out the Wilde brand across gateway city centre locations throughout Europe. The Strand will be followed by a second on Edinburgh’s historic King’s Stables Road, scheduled to open at the end of 2019. Further properties will follow in Manchester and Berlin.

Staycity Group, operating the Staycity Aparthotels and Wilde Aparthotels by Staycity brands, was founded in 2004 by Tom Walsh and his brother Ger, starting with a single apartment in Dublin’s Temple Bar, a former recording studio used by the likes of U2. With an active European expansion plan taking them to 15,000 apartments by 2022, Staycity Group has quickly established itself as one of the leading aparthotel operators. To find out more, please visit www.staycity.com. 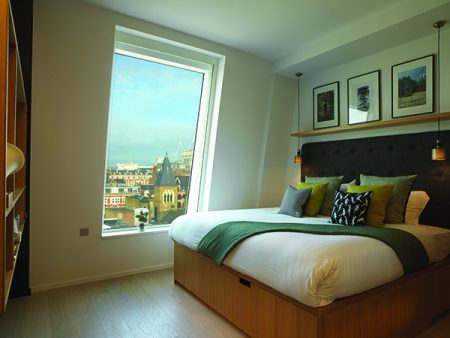 The Deluxe Group specialise in the manufacture and installation of bespoke joinery for the hospitality, high-end residential and commercial sectors. The old-established company has worked on an array of prestigious projects, many in London, including The Devonshire Club; The Institution of Engineering and Technology (IET) Savoy Place; The Curtain; and Oceanic House.

The Deluxe Group was engaged by Blenheim House Construction to fabricate and install a new room concept interior for Staycity. Having previously worked with Heneghan Peng Architects on The Giant’s Causeway Visitor Centre, a Gilbert Ash project, the company was delighted to be asked to be involved in the value engineering process, and it delivered a best-value, fast-track, high-quality treatment of the 106 rooms.

“At The Deluxe Group, we pride ourselves on our ability to deliver complex interior refurbishment projects within budget and on-time. We have an experienced management team with an international reach and a ‘can do’ attitude and capabilities to manufacture large scale bespoke joinery contracts in our state-of-the-art facilities in Northern Ireland and transport to anywhere in the world.”

“We are thrilled to have been involved in this fantastic development by Staycity and moving forward we hope to develop our portfolio of aparthotel projects even further.”