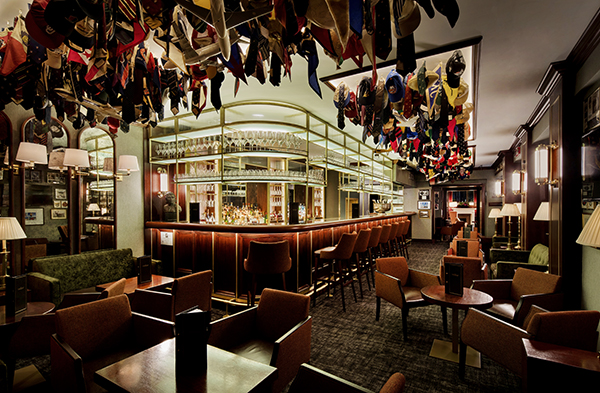 American Bar at The Stafford

The Stafford hotel in London has relaunched its iconic American Bar following a design overhaul led by Rosendale Design.

The unique venue has a compelling history as one of London’s oldest surviving American bars. Alongside the new interior look, a new menu showcasing Mediterranean flavours has been introduced and is complemented new selection of cocktails.

The overhaul of the American Bar comes a little over a year after The Stafford its restaurant, The Game Bird. Having worked as lead designers for the restaurant, Rosendale Design was once again given the daunting task of transforming a premier destination.

“The brief was to give the American Bar, which has served them well for so long, a new lease of life,” said Dale Atkinson, Director at Rosendale Design. “While essentially it’s a redesign, they wanted to stay true to what the American Bar is. It has so much history and it’s a destination in its own right. We had to be very delicate in how we approached the project.

“The layout has remained the same, so the bar is still in the same place. One of the key features of the American Bar originally was mahogany panelling in the bar. We’ve maintained this but had it polished to bring it back to life. Where before there was lots of random paraphernalia on the walls that had been applied haphazardly and there was no structure, we’ve reduced this and given it a structure.”

Other new features include picture lights to illuminate wall decorations such as photographs. The main marble bar has also been extended by a metre and had its curve reduced to increase its capacity. Work was carried out on site over the Easter period this year and a conscious effort was made to keep customer disruption to a minimum.

Overseen by culinary director Ben Tish, the new menu includes a selection of snacks, sandwiches, small plates and larger meals. Large plate dishes include pan fried potato gnocchi, roasted black bream and chicken Milanese. With summer fast approaching, the bar’s private courtyard will also be offering a selection of dishes straight from the barbeque. A selection of twelve cocktails has been specially curated, offering a historical journey around the surrounding area of St James.

Reflecting on this project and Rosendale’s ongoing relationship with The Stafford, Dale added:

“The Stafford is a destination hotel with a destination restaurant and a destination bar. For us, to be able to maintain our relationship is great. I think we have a good synergy between our teams. We know how we work together, our positives and negatives, and we are able pre-empt issues.

“We’re a small company and we pride ourselves on our relationships with our clients. We try and be personable with the clients and get to know them so actually our space reflect the clients personality. It’s always been about the people.”

The American Bar at The Stafford is open seven days a week. Dinner is served daily until 11pm. To find out more about the venue, please visit thestaffordlondon.com/the-american-bar. 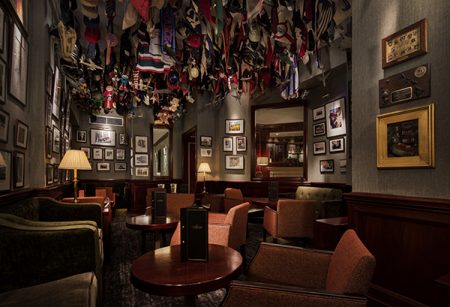 Located in the historic St James’s borough, The Stafford London is a luxury five-star, independently owned boutique hotel. Originally opened in 1912, the hotel boasts 105 rooms and suites with treasured London landmarks like Buckingham Palace and Trafalgar Square just a short walk away.

G.W. Franklin specialises in the delivery of high quality mechanical and electrical services to the luxury hotel, high-end residential, retail, commercial and fit out markets. Established in 1914, G.W. Franklin has an extensive pedigree in the hotel and hospitality sector having worked at the Four Seasons, Hyatt Regency Churchill Hotel, Intercontinental, Jumeirah Carlton Tower, Sheraton Park Lane, Lanesborough, The Ivy, Waldorf and Savoy amongst many others.

Most recently, G.W. Franklin undertook the complete electrical strip-out and refit of the American Bar at The Stafford. The company’s site manager worked closely with Rosendale Design to help specify and realise their lighting concept.

Work included the installation of the iLight control systems with night and day scene setting, and display and feature lighting, as well as new power distribution and data. The hotel remained in occupation throughout with all site works completed in two weeks.

“We have a long-standing relationship with the Stafford Hotel and Rosendale Design and were pleased to be working with them both again to complete the high-quality refurbishment of this renowned bar.”

“We pride ourselves on our high-quality service and attention to detail; we work hard to understand our client’s requirements to ensure that they are successfully met. This often leads to long-term working relationships and repeat business.”