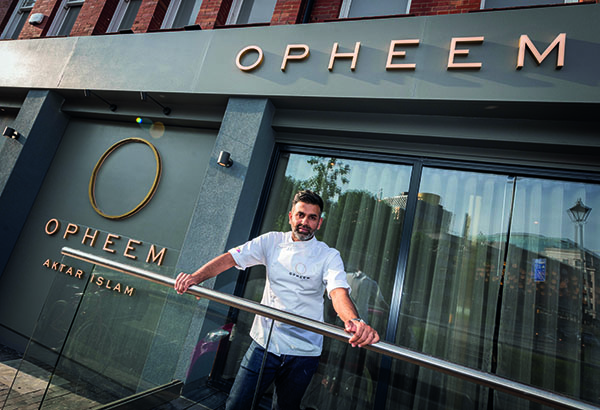 Award-winning chef and restauranteur, Aktar Islam, has launched his first solo restaurant. The 70-cover Opheem opened in June 2018 and is located in Birmingham city centre.

Celebrating the culinary heritage of India, Opheem is a fine dining restaurant and bar that aims to take diners on a gastronomic journey of a country steeped in food culture. Diners can choose from an a la carte menu, a tasting menu and a selection of grazing plates.

Award-winning interior designer and architectural consultancy practice Tibbatts Abel was given the daunting task of creating a space to match Aktar’s culinary skill. Previously operating as a nightclub, the venue has undergone a huge transformation to create Opheem.

“They did have ideas of the general direction that they wanted to take with the concept but for us it was a case of refining it and bringing it together,” said Adrian Abel, Director at Tibbatts Abel. “It was about taking the initial ideas and then developing it into a true concept.

“The premise is split into two distinct areas. Initially it is a very welcoming bar area and is a lounge led space as a precursor to the main restaurant. As you move through to the restaurant, the theme is a further elaboration of the lounge bar with a very high-profile theatre kitchen.”

“The design concept is inspired by the incredible food offer developed by Aktar. With a subtle, neutral and earthy basis, the interior sets the perfect scene for the show stopping food. Rich deep timber tones combined with raw, textured concrete effect which adorn the ceilings and walls and provide an elegant surrounding to dine in. A series of intricate brass ‘cloud’ like lighting feature add sophisticated ambiance overhead. Additionally, a collection of bespoke specialist finished artwork pieces are positioned in key areas, the concept for the artwork based on raw elements which links back to the food ethos. Bespoke hand finished furniture completes the quality element to the areas.

“The overall atmosphere is minimalistic but inviting, the focus remains on the food and drink. Diners are emerged into the theatrics of Aktar and his chefs at work in the kitchen with a feature glazed window situated in focal point view in the restaurant. We are proud to have delivered a venue where the food, drink and interior design are in perfect harmony and work to complement each other.”

Aktar was formerly chef director of Birmingham’s Lasan restaurant group. He appeared on Gordon Ramsey’s ‘The F Word’ as Lasan was named best local restaurant in the UK. He subsequently appeared on Great British Menu in 2011 and has also showed off his culinary skill on Saturday Kitchen.

Reflecting on the importance of this project, Adrian concluded:

“It’s important to be involved in this because we work a lot with entrepreneurs. We don’t manufacture rollouts but we take each project as an individual project. We really get to know the client and get to know the operations team so we can deliver their vision along with the food and drink offer. We focus on the strength of the relationship with the client.”

The creative Tibbatts Abel team was established in 2007 by a dynamic partnership of Adrian Abel & Adam Tibbatts who brought with them over 30 years of experience. The innovative team consistently designs and implements a wide array of concepts for hotels, restaurants, nightclubs, bars and pubs. This results in a brief which is fulfilled and brought to life to create a highly memorable venue designed by an industry leading consultancy.