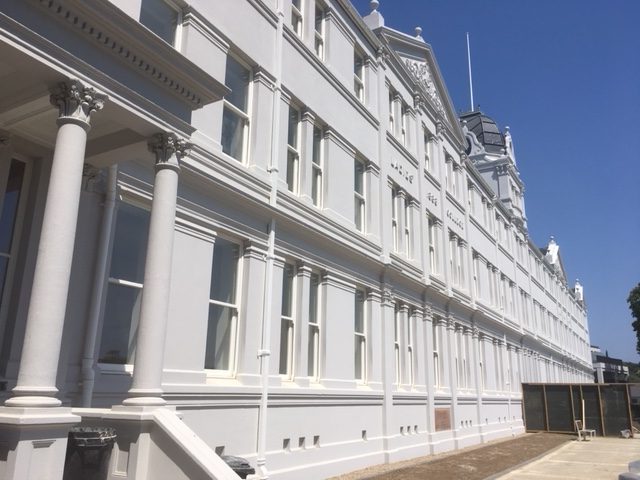 College Gardens is an exceptional and prestigious £38m re-development project to create one, two, three and four-bedroom apartments complete with allocated parking, extensive private landscaped gardens and a gym for residents, on the site of one of Jersey’s most iconic buildings – the former Jersey College for Girls at La Pouquelaye.

The project, located near the centre of St Helier, is being carried out for the Jersey Development Company (JDC), with ROK-Regal as main contractors, Tillyard as Project Managers, Hartigans as structural engineers and Henderson Green Partnership as mechanical and electrical engineers.

A total of 187 homes will be created, divided between the original college building and five additional new apartment blocks. The five brand new blocks are being built behind the original college building – Nightingale House – and each of the new residence blocks will be named after the former Jersey College Girls ‘House’ names; Austen-Bartlett, Cavell, Curie-Fry, Garrett-Anderson and Inglis.

Work on the project began in the summer of 2016 with full completion expected to be achieved in spring/summer 2019. The new apartment blocks are being completed in phases and this year has seen a number of milestones for the project accomplished. April and May 2018 saw the successful handover of 10 apartments in Inglis House. Some 40 apartments in Garrett-Anderson House for over 55’s have also been handed over. Both of these elements of the work were completed on schedule.

The next handover will focus on 28 apartments in Nightingale House, the original former girls College Building, and will be carried out in two phases. Phase one will take place at the end of July and will be followed a month later by phase two.

ROK-Regal was formed in 2014 and is headed by Robert Matthews. Having successfully constructed the prestigious States of Jersey Police Head Quarters, College Gardens is the second major project for the company in the last three years.

ROK-Regal was awarded the work following a two-stage tender. This is the first time the company has worked with the Jersey Development Company but ROK has a previous excellent working relationship with Project Managers, Tillyard.

Premier Construction spoke to Robert, to find out a little bit more about the mammoth project:

“The 5 new apartment blocks are modern apartment buildings. They are single skin block work with insulated rendered systems on the outside. The structures are a mix of masonry and reinforced concrete with single ply roof membranes on top. They are of a very robust construction, and all apartments in the new blocks have external balconies.

“The existing school has retained its external façade and everything has been restored to as it was before. As the original exterior of the building was drab & unattractive we have applied a coloured Kiem paint system, which has totally transformed the exterior aesthetics of the building, to a stunning light grey. I think one of the most attractive finishes to this project is the soft landscaping that has been created. The existing lawn areas have been retained at the front of the school with the installation of amenities for the residents to use: table tennis table, a roman theatre area, numerous benches, seating, picnic tables and gazebos. There’s a really nice feel to the project, it’s not your normal concrete jungle.”

College Gardens is one of a number of exciting developments currently underway on the island. While this no doubt bodes well for the future, it similarly poses a number of challenges during construction. Robert explained:

“As always the challenge is resources. We are landlocked around a school with a heavy residential population around the perimeter, making delivery of materials to site a logistical nightmare. As it stands in Jersey, there is a vast amount of work in the pipeline and pushing the resources to complete the work has been a battle. We are circa 220 operatives on the project, per day, it’s a busy place. In addition, because we are handing over in phases, we have residents and occupiers right on top of us, making noise, deliveries and dust a major issue.”

Jersey College for Girls was at the forefront of women’s education in the late 19th century and was one of only a handful of schools to prepare girls for university examinations. Instantly recognisable, the grand classical proportions of the Ladies’ College were designed by local architect Adolphus Curry in 1887.

A centre of excellence for learning, the Jersey Ladies’ College building was set in extensive landscaped grounds, overlooking a large formal lawn where tennis was played. A Greek-style theatre was built in the 1930s. Original features like the mahogany staircases, which were part of the building’s character, are being restored to life by the new development.

The school’s rich history means it holds a special place in the hearts of many locals. The chance to own a little slice of history has proved to be hugely popular. All 187 apartments were purchased before the end of 2017, thanks in part to the sympathetic design and unique setting. Many of the purchasers have bought into the community-feel of the site and it’s anticipated it will create a real sense of community spirit for the residents. A broad range of people have bought units, with most being owner-occupiers ranging from former pupils, young professionals and those wishing to down-size.

The construction of the development has also helped generate significant income and jobs for the local economy. Robert added:

“To put it into perspective, there is not one apartment left, as they have all sold off-plan. The project has quite a lot of significance for people in Jersey because of the old school. Some of the residents, in the existing building, being ex-pupils of the college and it’s very prominent position in St Helier. This is a success story for Jersey Development Company. “

“For ROK-Regal, as a construction company, this being the largest project in Jersey for many years and the largest project that we have delivered in Jersey in the last three years, following the States of Jersey Police Head Quarters, as a business we have grown exponentially and we have demonstrated we can deliver large projects of this scale, on time and on budget.”

To find out more about College Gardens, please visit www.collegegardens.je.