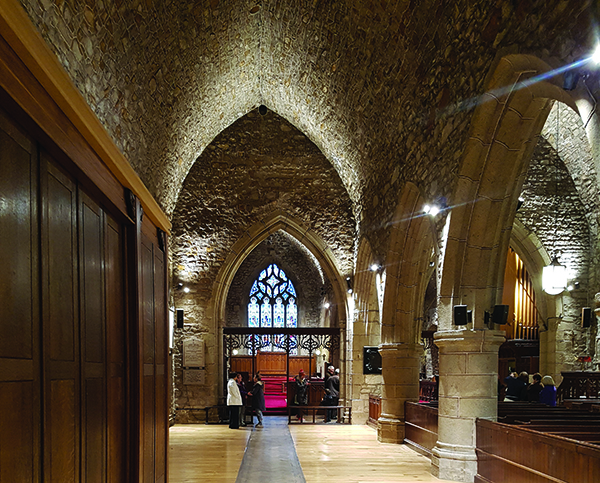 A significant refurbishment and renovation project at one of Jersey’s most historically important buildings has been completed.

St Saviour’s Parish Church boasts a rich history of Christian worship on the island stretching back over 900 years. The recent refurbishment, which was completed in June 2018, has helped secure the future viability of the building for many more years to come.

The project encompassed a variety of elements, from the installation of a brand new lighting system to eternal structural repairs. Like the majority of parish churches on Jersey, St Saviour is made up of two churches alongside side each other. The overall aim of the project was therefore to keep one half traditional while transforming the other into a more modern, flexible space. The main contractor on the project was V&V Stonemasons & Builders, who were assisted by respected consultant Anthony Gibb.

The Rector, the Reverend Peter Dyson, recently spoke to Premier Construction about the work, explaining its origins, challenges and importance looking to the future. He began:

“We’re talking about a church that’s 900 years old. Jersey has 12 old, ancient Parish churches and St Saviour is one of the 12. The first thing to say is, quite rightly, when you look at doing work on an old church you have to go through a lot of legal hoops. In Jersey you also have to get the permission of the local parish. Then you have to go through planning and the ecclesiastical legal court. We had to go through all that which was quite tough but we got there.

“Someone recommended a consultant called Anthony Gibb, who is an expert in conservation and old buildings. The vision was how do we keep this 900 year old building traditional for those who like traditional worship and indeed to respect the history of this old building, while at the same time making it more modern so that the space can be used more flexibly.”

One of the first areas to be addressed was the lighting. Previously one of the darkest churches on the island, a whole new lighting system has been installed. In the more traditional part of the building, modern LED lighting is complemented by 3 bespoke Victorian style lanterns. The new lighting has helped transform the church internally and offers a new perspective to those who enter. The intricacy of the granite walls and subtle colour changes are also now more visible thanks to the improvements.

Conversely, one of the significant changes in the modern side of the church is the introduction of a new servery. Thanks to the skilled carpentry and craftwork of V&V, old pews have been given a new lease as a place for coffee and refreshments.

The refurbishment began in January 2018 and the church was emptied for 3 months while work took place. Between January and Easter, Peter and the congregation temporarily worshipped in a local hall. He continued:

“The nervous breakdown for me was walking in there in the middle of the work, when it looked like a building site! I thought will this work? The other challenge was, as soon as you close on old building like this you discover other things that need doing. In addition to all the planned work, they found that the 19th century heating pipes under the floor were leaking and needed to be repaired.

“There was also quite a lot of water ingress, because it was a very bad winter here, through the church tower and the west wall. I didn’t know before but I know now that granite is very porous! They had to re-line from the outside so in addition to all the work going on inside, they had to have scaffolding right up the tower.

“Speaking as a lay person in this line of business, I was impressed both with the consultant and with V&V with the way they helped me see what the next stage was and delivered what I and many others think is first class workmanship.”

To mark the completion of the work, a service of celebration followed by a reception was held at the beginning of June. Approximately 300 people, including the Lieutenant Governor, Bailiff and Connétable, were in attendance. A plaque was also unveiled recognising the generosity of Evelyn Pullen, whose bequest made the project possible.

Reflecting on the importance of the work, Peter concluded:

“The church has been here for 900 years, and it’s a historical building and a parish building. What we’ve done is made it fit for purpose, hopefully for the next 50 to 100 years. It’s also a place of Christian worship and the work has created a flexible building that can be used for traditional worship and modern worship.”