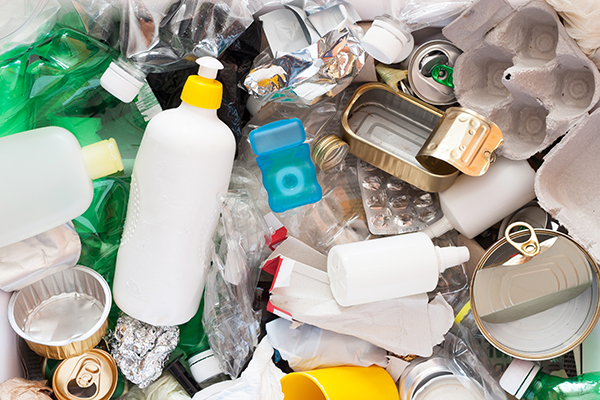 A new waste transfer station will be completed in October this year, and will be followed in 2019 by a new Household Waste Recycling Centre.

The new facility will process waste from households and businesses prior to being exported for energy recovery or recycling. It will have capacity for up 26,000 tonnes of residual waste, as well as 4,000 tonnes of food and 2,500 tonnes of glass. Construction is being carried out by local firm Geomarine, on behalf of main contractor Wood plc.

The concrete supporting base for the main frame and the floor of the new building were completed in December. The frame of the building was then completed in late January, when work started on installing steel cladding to form the walls and the roof.

The project also involves the general development of the Longue Hougue site. That includes installation of services, drainage, and access roads; creation of a three metre high flood protection bund around the entire south east corner of the site; and general landscaping.

The Longue Hougue site itself has been reclaimed from the sea.  It has been formed by creating an engineered perimeter wall, made from rock, which has then been infilled using material from local building and demolition projects.  To support the transfer station building, steel piles have been driven into the base material, to a depth of up to 28 metres, until they reach the bedrock beneath the site.

When it opens in early 2019, the new purpose-built centre will replace the current temporary recycling site at Longue Hougue.

Work on the centre started in May this year and it will be located to the south of the new transfer station. The £2m contract for work was awarded to local construction firm J W Rihoy & Son. It will accept materials collected now through bring banks, as well as items such as scrap metal, polythene, old electrical appliances, bicycles, batteries and rigid plastic.

A repair and reuse element will ensure that items that are still in good condition can be given a new lease of life. This will operate as a social enterprise partnership – an existing arrangement is in place at the current recycling site, on a trial basis, involving local charity GO.

A spokesman for States’ Trading Assets  said it will be a major improvement on the existing facility. He said:

“The current site has always been a temporary facility, until new infrastructure at Longue Hougue could be properly developed. It has proven to be very popular, despite its considerable shortcomings, which are evident to anyone who has visited the site.

“The new Household Waste Recycling Centre will be a vast improvement, with proper access roads and hard surfacing throughout the site. It will provide drop off facilities for all the materials that we currently collect for recycling, as well as for general household waste, all in one place.”

More than 1,000 tonnes of household waste is recycled through the current Longue Hougue facility each year, in addition to thousands of items recovered by GO for reuse.