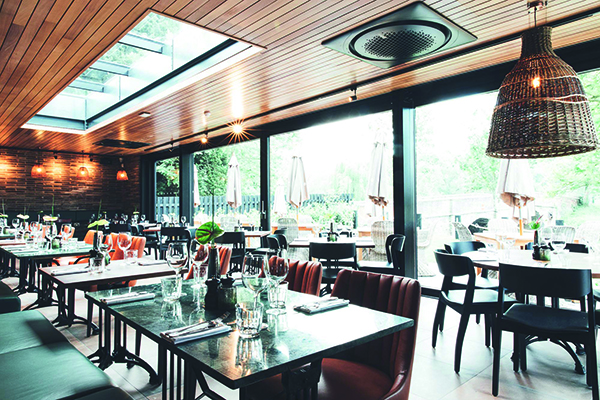 The Four Alls in Welford-on-Avon, Warwickshire has reopened following a mammoth and imaginative £1.9m restoration project. The pub officially welcomed back customers on Friday 1st June.

The result of the major restoration works to The Four Alls is a new kind of pub. The venue now blends rural tranquillity and tradition with a contemporary offering, and locally brewed ales through to a modern Mediterranean inspired menu. It is the latest addition to Oakman Inns & Restaurants’ Collection.

The Four Alls encompasses a number of buildings and extensions that previously meant the venue lacked a coherent and harmonious feel. The refurbishment has addressed this problem through imaginative restoration work. Externally, by relocating and enlarging the car park away from the River Avon, a series of newly paved al fresco terraces and outdoor seating have been created overlooking the riverbank.

Property Director, Malcolm Schooling said: “When Oakman Inns first took on the building it was orientated completely the wrong way around and didn’t take advantage of the beautiful views and tranquil riverbank setting. The additions over many years had compounded this fundamental problem. It’s a common characteristic of Oakman Inns’ schemes to recognise the key to unlocking the potential of each of their sites and this was no exception. Our challenge was to reposition the kitchens, toilets, services and car park and open up the building so that customers could enjoy the views of the adjacent medieval bridge and fantastic riverside position. The new glazed restaurant extension gives diners a sense of being more a part of the rural surroundings and is also designed to be an attractive addition when viewed from the surrounding countryside.

Keen as Mustard Design was responsible for the interior design and Premier Hospitality spoke to the company’s Director, Drew Keen, who began by explaining the origins of the project:

“We’d already established a successful relationship with Oakman Inns, having worked on the Betsey Wynne in Swanbourne six months earlier. Our responsibility at The Four Alls was chiefly interior design although we also project managed the restoration. We were partnered with BPN Architects in Birmingham who were responsible for the shell architecture.

“One of the biggest challenges was that the site is located on an active floodplain. This is what’s known as a passive site, meaning that in the eventuality of the site flooding, the water would have to come into the building. We’ve had to rethink the design in a such a way that means if flooding does occur, it can withstand the flood to some respect. All the wall and floor finishes are waterproofed and we’ve installed flood barriers around the servery counters to protect the food prep area, pizza oven and bar areas.

An elegant extension with giant glazed, bi-fold doors facing the river provides a new light-filled restaurant for up to 80 guests. This features Oakman Inns’ hallmark theatre-style open kitchen where guests can watch Mediterranean-inspired dishes being freshly and expertly prepared over the Josper charcoal grill or pizzas being hand-crafted and cooked in the authentic wood-fired pizza oven. Somewhat unusually, the front of the kitchen counter is clad with patina zinc fish-scale tiles.

The adjacent restored barn, dating back to 1869, provides additional seating and a separate room for private events by sliding across the large replica boathouse doors on rollers.

“I understand that the new-look has had great reception from locals and those from further afield. It’s always great to work with a company like Oakman Inns because they are always innovative and forward thinking, ensuring they are future proofing their sites with facilities such as electric car charging points. Their projects are always challenging in different ways. It’s all about using the right techniques to get the right look and this gives us an opportunity to use our imagination and creativity to produce the result they’re looking for  which is both exciting and refreshing.”

Under the stewardship of new General Manager Claudia Reiter, The Four Alls has already received a number of positive reviews and looks set to be a staple in the village of Welford-on-Avon for many years to come. Speaking of the opening, Oakman Inns’ CEO, Peter Borg-Neal, said: “This is Oakman’s 22nd opening, and our second in Warwickshire, and I hope everyone locally is as enthusiastic as I am by the transformation of The Four Alls. With a super team in place, led by Claudia, we believe that this fabulous pub can now fulfil its potential.”

To find out more about The Four Alls, please visit www.thefourallswelfordonavon.co.uk. 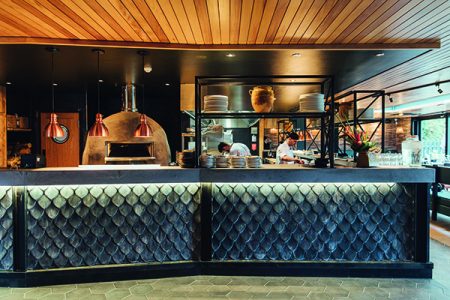 Founded by entrepreneur and CEO Peter Borg-Neal, the first Oakman Inn opened its doors in 2007. The company has built its reputation on transforming historic and modern buildings into contemporary venues. During its time in operation, the company has won a number of industry accolades, the latest being a Catey Award for Best Pub & Bar. The company has been particularly successful at The Publican Awards and is ranked for the second consecutive year in the top 20 of the Sunday Times 100 Best Companies to Work For.

Wedge-Wood Construction & Joinery UK & Int. Ltd is a leading contractor specialising in the delivery of projects within the hospitality, leisure and retail sectors. The company has been in operation for 38 years, working on varied schemes from traditional, Victorian structures to contemporary buildings, with work covering pubs, clubs, restaurants, shops and hotels throughout the UK and overseas.

Over the years, Wedge-Wood Construction has been fortunate to have worked with many of the main brewery operators in the UK, as well as various independent clients. This has helped Wedge-Wood Construction to establish partnerships with clients and designers and this in turn has resulted in long-lasting relationships throughout the industry.

“We are proud to have worked alongside Oakman Inns. The project had its challenges, including working throughout the winter alongside an ever-rising River Avon, but we overcome these with no problems.

“This project made the most of an array of different finishes and materials including steel, zinc, cedar, oak, teak, glass and ceramics to produce the effect and build quality our client was looking for. We also incorporated a brand new car park and external layout, to maximise the great location, serving the local community and beyond for years to come.”

“We are delighted to place The Four Alls in our portfolio of successfully completed projects and we wish everyone involved the very best for the future.”