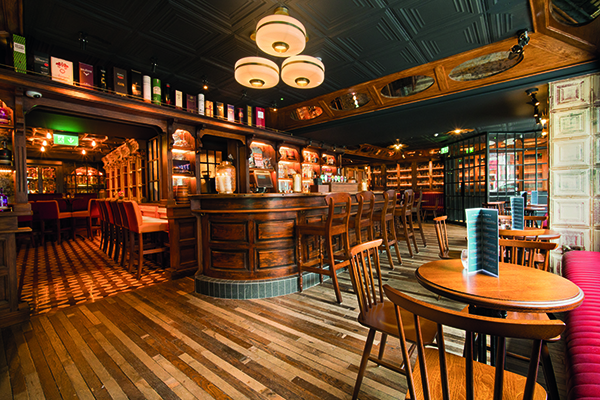 Inspired by the tradition of Ireland’s Victorian ‘grocery bars’, the stylish new Woodrows Bar Snug Eatery has opened at the Westcourt Hotel in Drogheda.

Main contractors for the project to create the new bar were MacDuff Construction, who were praised for the high standard of their work. Interior designers were Frank Ennis Design.

Frank Ennis managing director of Frank Ennis Design said: “The aim of the design was to create an intimate environment within a constrained space which was previously occupied by a bar.

“The interior concept was therefore to provide a multitude of functions and spaces offering a variety of choice and experience. These include a traditional bar and a whiskey parlour (similar to those found in grocery bars, which provided a place for women to sit).”

Suzanne Roche, lead designer in charge of the project at Frank Ennis Design added: “The constraints of the space included a low ceiling height and the existing structure with a bedroom block above. We wanted to create a variety of experiences within the new bar, with a nod towards the style of Ireland’s traditional Victorian ‘grocery bars’ which combined a shop and a bar and were found in provincial and market towns.”

Many of the joinery details are based on traditional examples, combined with original salvaged pieces which have also been incorporated – all offset by contemporary elements such as a pre-cast concrete and block feature wall, metal and glass screens, polished concrete floors, together with an original salvaged floor from a former convent. The design has also introduced a number of ceiling roses within the back lounge area.

The bar counters have been created using an amalgam of original salvaged joinery elements combined with reproduction joinery.

The furniture reflects the eclectic mix of the design and includes seating styled after park benches, together with reproduction cast iron furniture, upscaled with piped velvet and leather upholstery.

The colour scheme includes a palette of rich intense jewel-like colours which are offset against the dark background on the ceilings and some of the walls. Exposed and salvaged timber effects are also featured within the design mix. Lighting is designed to give a warm amber hue as a backdrop to the dark background and intense colours.

Suzanne Roche said: “The main challenge of the design was creating an island bar counter within the space constraints, with the overall aim being to create a warm, intimate idiosyncratic interior.

“MacDuff Construction did an excellent job – they are talented craftsmen and were very good to work with.”

Frank Ennis concluded: “The project is respectful to the bar traditions of Drogheda and fulfils our aim of creating a design with character, which would age well and could become a classic pub of the future. We certainly enjoyed the challenge of the project.”

According to the hotel: “We take our name ( Woodrows Bar ), from possibly our most famous patron; Woodrow Wilson, the 28th President of the United States of America, who in 1899 stayed on these premises, in what was then The White Horse Hotel.

“A contradictory and complex character, Wilson’s legacy is praised and criticised in equal measure. His administration presided over the introduction of US prohibition, yet Wilson famously loved Scotch, even utilising a catchy jingle of a 20th century whisky brand in his presidential campaign — ‘Wilson! That’s All!’

“Expect a lively spot full of banter and chatter, especially the whiskey snug and the parlour bar. Our building dates as far back as 1755. The original deeds will be on display in the hotel. It was an infamous tavern frequented by passing merchants in this busy port town. If only the walls could talk!” 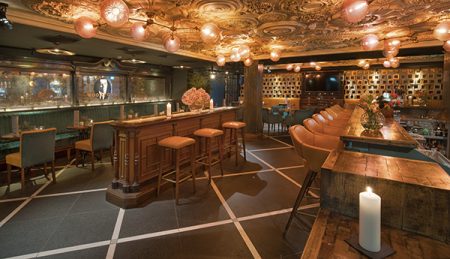 McDuff Construction is a leading contractor, specialising in the delivery of small and large scale construction & joinery fit-out projects. The company has been in operation for 16 years and within this time has been involved in a range of schemes within the hospitality, retail and education sectors.

Most recently, McDuff Construction was appointed as the main contractor on the Westcourt Hotel project. This appointment included joinery manufacture and installation.

“It was a pleasure to be involved with such a landmark building and to work with such a professional, hands-on client like Valerie and a great design team from Frank Ennis Associates headed by Suzanne Roche.”

“At McDuff Construction we pride ourselves on our ability to exceed our clients’ & architects’ expectations on quality and finishes, bringing projects in on time and within budget.”