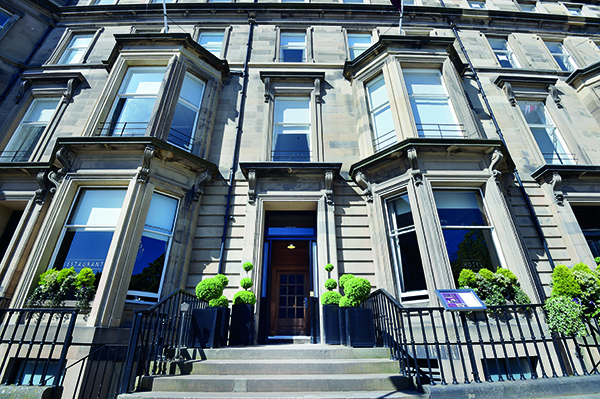 The first phase of a multi-million pound refurbishment of The Bonham Hotel in Edinburgh has been unveiled. A total of 49 individually styled and refreshed guest rooms and suites were revealed in June 2018.

The interiors, by leading London and Dublin based luxury Interior Designer Nigel Howard, have transformed the acclaimed Bonham Hotel into an elegant period property sympathetic to its Georgian architectural heritage. The individually-styled guest rooms blend traditional period elements with the very best of modern fabrics and finishes.

To find out more about his work on the project, Premier Hospitality spoke to Nigel Howard:

“I’ve worked with the client before on a previous hotel project and it was on this premise that they asked me to work with them on The Bonham Hotel project. My client has a preference for period buildings and their architectural heritage. Some of these buildings are in poor condition, however the Bonham was architecturally sound retaining all of period detailing intact. That said the beauty of original interior architecture was glossed over with a bold modern design a decade ago. Although well designed and very successful, it was time to unveil the past and marry period appeal with the comfort of a modern hotel living.

“That was the brief really. It’s a delicate balance taking it back to something that resembles the Georgian period, because it wouldn’t have been the most comfortable of times to live in! You didn’t have modern comforts in those days so the idea was to create something that complimented the Georgian period with the comfort of modern-day living, which would satisfy the discerning tastes of today’s hotel guests.”

The room designs are as true as possible to the Georgian period. Cornice and woodwork, for example, have been restored to their original form having previously been covered up or painted over with modern decorative finishes. Each room makes full use of the floor to ceiling windows which bathe the rooms in natural light and provide exquisite views across the city. Modern touches such as the carpet and the choice of modern fabrics, helps maintain a contemporary feel.

“It’s always satisfying to secure a project where the client appreciates your work and you are aware of that based on work you’ve previously done together and what you achieved. We’ve got credibility, but you’ve also got the trust of the client. It’s a privilege to work on a project such as the Bonham Hotel, where you can bring a building back to its original form, magnifying its exquisite features. The initial reviews are very encouraging in relation to the work that’s been done.”

Further investment in the hotel is to be carried out throughout the rest of the year and will include a refurbishment of the restaurant, the popular Consulting Bar and the remaining ground floor public spaces.

Regarded as one of the most stylish hotels in Edinburgh, The Bonham, set within a Victorian townhouse in a quiet, leafy crescent in the west end of Edinburgh, is one of the city’s hidden gems.

The four-star luxury hotel – awarded best boutique hotel by LateRooms.com ‘Simply the Guest’ awards – offers the best of a city centre venue without the usual hustle and bustle. To find out more, please visit www.bespokehotels.com/thebonham.