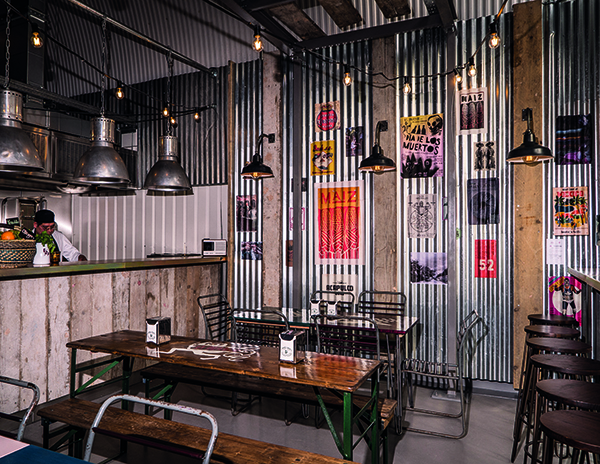 Sam and James Hart and Crispin Somerville have opened their new tortilla and taco bar, Tortilleria El Pastor. Opened on Friday 13th April, the site is located at 58 Stanworth Street.

The tortilleria, or tortilla factory, will make fresh tortillas from scratch every day, using Mexican heirloom corn (maize). These tortillas will be available to take away, along with freshly made El Pastor salsas, fresh tomatillos, Mexican style cheeses from Gringa Dairy, tortilla presses, mescal and Mexican beers; all the essentials for preparing Mexican food at home.

Speaking to Premier Hospitality magazine, James Hart from Harts Group said: “We opened El Pastor in 2015 and that was our first taco restaurant but we discovered that we really needed a much bigger operation to produce the tortillas. We then spent quite a bit of time looking for a space and eventually found this 4,000sq ft railway arch, of which 3,500sq ft is our Tortilla bakery and mill. We then have a space at the front that we have turned into a Taco bar that has been really well received so far.”

The taco bar will serve up freshly-made, warm tortillas in a short menu of tacos, including the namesake Al Pastor. For a sweeter snack, there will be the El Pastor favourite, the EP Bounty Bar. The taco bar will also serve Mexican beers and El Pastor’s first batch of its own mescal, made in partnership with Mexico’s La Clandestina mezcaleria and their master mezcalero, Don Guillermo Abad. This mescal will also be able to take away.

As with the original Stoney Street restaurant, all tortillas will be made using heirloom corn sourced in collaboration with partners, Tamoa, in Mexico. Tamoa seeks out the increasingly few farmers preserving and cultivating native Mexico corn, linking them with restaurants in Mexico and beyond and ensuring they are compensated fairly for protecting the country’s bio-cultural heritage. El Pastor believes strongly that this native corn is on a far superior level in terms of flavour and nutritional value to the growing type of cheaper, transgenic grains, and that the resulting tortillas are profoundly different.

Tortilera El Pastor seats 26 within its Taco bar, 20 at tables and 6 at high stools. The design, led by James Hart, is utilitarian and pared back, but with the atmospheric festoon lighting, characteristic of the Stoney Street restaurant.

James said: “Our design aesthetic has always been led by authentic Mexico City inspiration. My brother Sam and business partner Crispin lived in Mexico City for a while and I have spent a bit of time there so before we did the first project, we went to Mexico City three times and spent a lot of time gathering different things for design inspiration and built up quite a massive back catalogue of imagery, photographs and design ideas. Because this is a little Taco Bar on the end of a Tortilleria, bakery and mill, we didn’t have a budget for decorating and bringing a restaurant to life so I very much did it myself with the inspiration coming from the same place as the first site, with the design being very functional and engaging with people. The result has been really successful and it feels quite raw and quite real and that is what we are trying to create with our Taco eating experiences – to transport people to Mexico and create something that is an authentic taco experience.”

The venue is open Thursday dinner, Friday and Saturday lunch and dinner and Sunday lunch times.

James concluded: “For us, this is the cornerstone of everything that we do because the bakery is everything. The tortillas are the lifeblood of all the things that we doing going forward and the restaurant that we created in the first place and improving those tortillas is a huge apart of what we do. In that sense, this new site is incredibly important and in another sense what we have created with the taco bar is important because we have almost by mistake come up with a new concept, which is entirely different o our restaurant concept but with a similar product. It is really exciting for us and is something we may look at doing more of.”