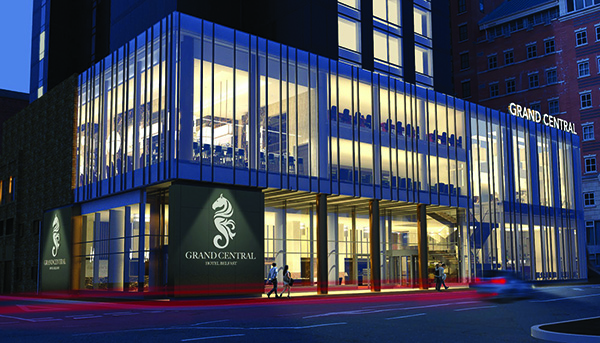 Following the largest and most expensively constructed hotel project ever seen in Northern Ireland, the 23-storey 300-bedroom Grand Central Hotel is now open in Belfast.

Residents of Belfast have watched over the past two years as Windsor House was transformed from an unloved office block to the key feature on the city’s skyline, with its unmistakeable seahorse logos and shimmering charcoal panels visible across the city.

The hotel was constructed on time and on budget by local builders Graham’s of Dromore, with design being led by Belfast architects RPP. The Bank of Ireland has assisted with project funding. Many local firms can take great credit for their part in ensuring the doors opened on schedule.

Located on Bedford Street, this is Northern Ireland’s tallest hotel and brings a new era of glamour and grandeur to the heart of Belfast. This Grand Central is the second of its kind; a contemporary reincarnation of a Victorian hotel with the same name that stood on Royal Avenue from 1893 to the 1970s.

Inside, historic stories inspire contemporary design and luxury is elevated by local authenticity. The new branding for the hotel incorporates the seahorse, a nod towards Belfast’s Coat of Arms and a celebration of the City’s Maritime history. A legend reborn, the Grand Central Hotel is a new jewel for Belfast with an old soul.

The Northern Ireland hotel scene is enjoying a period of rapid expansion, and the opulently appointed bedrooms in Grand Central mark the greatest leap forward to date.

Bedrooms and suites offer privacy, relaxation and comfort. The hotel offers 300 intricately designed luxury bedrooms including 10 suites, all with spectacular views over the city.

Thoughtfully crafted as a cityscape sanctuary, all rooms are contemporary in design with touchable, tactile fabrics and state-of-the-art finishes. Furthermore, each room and suite is complemented by modern amenities and the famous Hastings Hotels Cloud Bed.

With three exceptional restaurants and bars on offer, guests have the option to wine and dine in easy-going elegance and true grandeur style. 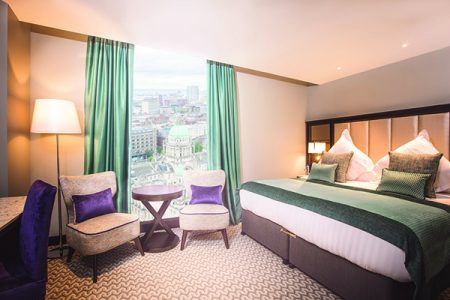 For a more relaxed gourmet offering, guests can head to The Grand Café to enjoy a coffee and bistro bite or simply a glass of wine. With its own private entrance off Bedford Street, The Grande Café is open to both locals and hotel guests and serves from 6am until late at night. Showcasing a vibrant yet stylish design, the café’s walls of windows flood the space with natural light whilst the sweeping counter and assorted seating invites all manners of get togethers.

A further homage to Belfast’s maritime history, the Seahorse Bar & Bistro on the first floor offers two distinct spaces within one exquisite venue.

From the phenomenal cuisine and cocktails to the lavish fabrics and fittings, guests will find quality in every angle. The distinctive design includes art deco nods, high ceilings and a dramatic sense of space. As the vibe inside shifts from day to evening, the Seahorse’s real allure comes through as a dual destination with multiple moods.

The jewel of Grand Central is The Observatory, opening in September 2018. Located sky-high on the 23rd floor, this awe-inspiring cocktail lounge provides incredible panoramic views over Belfast and beyond. From pavement to panorama, this is the highest bar in all of Ireland The Grand Central is all about showcasing the very best of Belfast, and with decadent décor and stunning vistas, the Observatory does that in high-definition.

A poem has been commissioned to mark the hotel’s arrival. Snippets of it are etched into the pavement at the hotel entrance, and in a metal fretwork screen. It is by one of Northern Ireland’s leading poets, Paul Muldoon, who used to work in the building when at the BBC in the 1980s. It is entitled “Hymn to Belfast” and speaks to the new era in which Belfast now finds itself, acknowledging its past glories, and the spirit of its kinsfolk who are now transforming its fortunes once again.

With its dramatic “double height” space on the ground and first floor levels, the hotel is international in outlook, and cosmopolitan in feel. No expense has been spared on its marble flooring, its plush fabrics and its dramatic interior lighting.

The £53 million committed to this project by Hastings Hotels has created an unmistakably upscale venue for locals and visitors alike.

The Grand Central’s personality is further enhanced by its sense of being at the epicentre of all that is Belfast, adopting as it has the seahorse logo which in turn belonged to the “old” Grand Central Hotel in Royal Avenue.  This seahorse is most vividly depicted in the hotel’s main restaurant in a specially commissioned eye-catching illustration which deconstructs the official Belfast crest, featuring Chichester’s wolf and the seahorse and their contribution to the founding of the city. 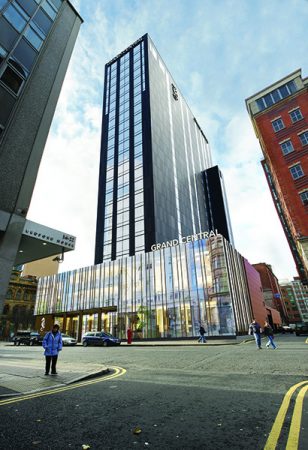