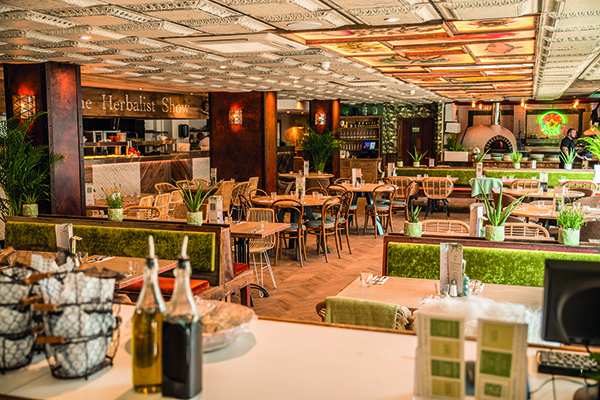 Named in honour of those great explorers and botanical pioneers of the seventeenth and eighteenth century, The Herbalist is an exciting pioneering adventure in social dining, bringing a new experience to the culinary scene in the heart of Maidstone; the county town of Kent.

The Herbalist is a pub, bar and restaurant combined with a basement entertainment venue called Junipers. Located at the site of the former Buddha Belly restaurant at the corner of Pudding Lane and High Street, Maidstone, Elite Pubs has invested £1.2 million into the venue. The combination venue also features a pizza shack serving wood fired oven takeaway pizzas from a clever little opening onto Pudding Lane for those enjoying the County Town’s nightlife.

Premier Hospitality spoke to Martial Chaussy from Elite Pubs about The Herbalist.

How did this project come about?

“This is a brand new and exciting venue for us. Originally the site was an Indian restaurant which we have totally transformed to create a beautiful and relaxed eating space called The Herbalist.”

What did the project involve? Did you have to redesign the entire space?

“Yes. It was a total redesign of the internal look and feel so that customers and staff could experience something completely original.”

How would you describe the look and feel of the restaurant?

“The look is eclectic, herbal and down to earth. We have used a strong collection of very earthy colours giving a very relaxed and casual space.”

What was the timescale of the project?

Have you had any feedback about the space and what people think about it?

“The feedback has been very positive. The reviews on TripAdvisor have been great with the restaurant being very well received. Indeed one of the reviews said that The Herbalist is exactly what Maidstone needed.”

Are there any design features or anything that is of particular interest in the restaurant?

“The building space is also linked to a club downstairs called Junipers so it is interesting having the two sites linked. We have a theatre kitchen in the dining space and the whole site is open plan. There is also a space that sells pizzas internally and also to take away so people can buy them on the street when they are out and about. We also have a separate and cosy space for private dining.

Is The Herbalist similar to your other restaurants or is it different?

“The Herbalist is unique in that it is our first town centre pub and has created a totally new type of experience.”

Where there any difficulties or challenges with the project?

“To be honest no, it all went quite smoothly.”

How important has this project been for you?

“It was quite a strategy move for us in terms of positioning ourselves as a group in the South East. To have a site in the centre of the County Town is great.” 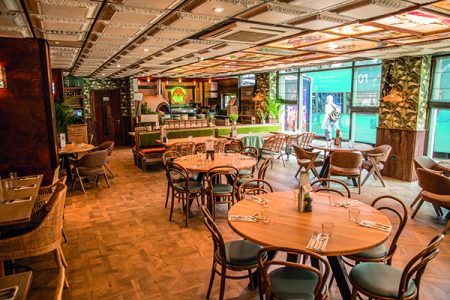