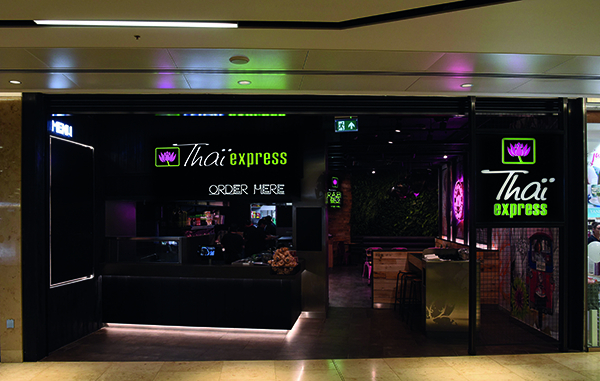 The Thai Express chain has been on a fast track for growth since its first location opened in Guildford 5 years ago. Now, opening its fifth and likely most strategic location at Birmingham’s Grand Central, it’s clear that the Thai Express savoury street style cuisine has mass appeal.

The Birmingham location was designed by interior design firm Faber Design and was completed alongside main contractors Elite Shopfitters. Faber’s vision for the new space blends two elements – one reflects the buzz of the city and Bangkok’s striking architecture, using concrete and metal materials. The other conveys the beauty and vivid colour of Thailand’s landscape, using natural materials such as wood and greenery.

Uzma Pattani, UK Operations Director told Premier Hospitality magazine: “You have to stand out from the crowd and you have to use attractive imagery and great lighting so we have taken this opportunity to give the brand a facelift. When you go into the Birmingham store, you can see, compared to our other four locations, that it is a whole new look designed specifically for our UK clientele.

“Since our logo is a lotus leaf we wanted to have that incorporated into the store design. We have personally designed large pendant lotus flowers that are a feature in the new stores. Each one opens up slightly differently to add fluidity. They are metal flowers with cutwork on each leaf to allow the light to come through differently for each pendant. We also have continued to use our feature walls, and have brought in some vertical gardens to add to the rural Thailand feel.”

Bringing the buzz of Bangkok to Birmingham, you can expect to sample dishes from a delectable and authentic full Thai menu, cooked only by specially trained Thai Express Wok chefs. The open kitchen allows for live and customer facing food preparation, providing a feast for the eyes and the palette. Thai Express prides itself on using the freshest ingredients to create their star dishes including their signature Pad Thai, Tofu Satay Stir Fry, Coconut Tom Yum and their recent finger lickin’ invention of Thairacha Chicken Wings. Customers are also invited to garnish each order with unlimited crushed peanuts, lime and Sriracha sauce.

Thai Express is the ideal option for the person on the go who wants to escape the ordinary: prepared in under two minutes, while being sophisticated in taste but not in price – all dishes are affordable at under £8 per plate. Thai Express carries halal meat, fish, vegan, gluten free and vegetarian options, ensuring there is literally something for everyone.

Uzma added: “We are super excited to have opened Thai Express in Grand Central. Birmingham was the ideal choice because of its diversity and strong commercial centre. The buzz of Grand Central is a perfect fit for our brand.” 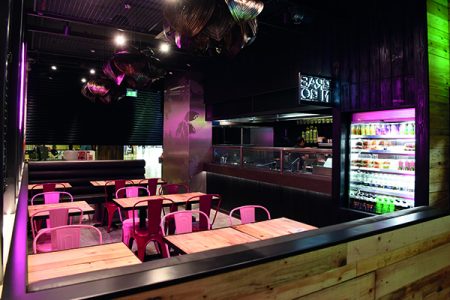