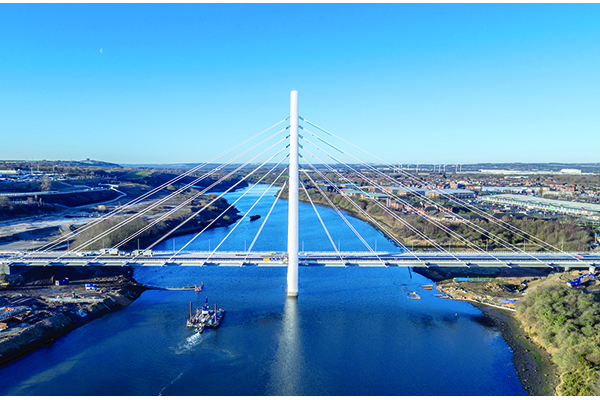 Northern Spire – formally known as The Wear Bridge – is the first new bridge to be constructed in Sunderland for more than 40 years. The bridge stretches across the River Wear, between Wessington Way and European Way in Sunderland, is a three span cable-stayed structure, with an A-frame pylon measuring twice the height of Nelson’s Column and includes two lanes for traffic (moving in both directions), as well as footpaths and a dedicated cycleway.

Sunderland’s new structure is a truly eye-catching development, designed and built to last, with a lifespan of at least 120 years. Around 2,000 people worked on the project, equating to more than 900,000 man-hours.

“Not only does Northern Spire look impressive, but it will bring enormous benefits to the city, not least in making it easier and quicker for people to travel around Sunderland.

“It will reduce congestion and travel time, and will also open up huge areas of land along the River Wear for regeneration, whilst also attracting investment, boosting the economy and leading to more jobs.

“Northern Spire is a significant part of the future plans for Sunderland. The city is open for business and is looking towards a bright future.”

“I think I can speak for everyone who has worked on the project, those who live locally and those from further afield, when I say that it has been a huge privilege to be involved, and we feel immensely proud.

“It’s been a major project that, at times, was both complex and challenging, requiring the skills and expertise of so many different groups of people. Bringing all those people together, sitting down and planning the project and the methodology to build it was one of the greatest challenges, but also one of the most satisfying. We are fortunate that we have had some very talented people working on this project, and it is those people who have made it a success.

“We hope people enjoy travelling over Northern Spire as much as we have enjoyed building it.”

David Abdy, Project Director for Sunderland City Council, said Sunderland’s new bridge was the culmination of decades of hard work, determination and perseverance by the council.

He said: “Pulling off a major construction project such as this, with the Government backing, funding and planning it requires, is an enormous task and is not something that can be done quickly, without a lot of strategic planning, and national, regional and local support.

“Northern Spire has been in construction for three years, but it has actually been in the planning for decades, so it’s wonderful to see all that hard work come to fruition. It has come a little later than planned, but I think people will agree that it has been worth waiting for.

“No one person or team could have delivered it on their own; it has been a huge team effort. I would like to thank everyone who has helped to make this bridge a reality, and I would like to thank those businesses and residents who are located close to the bridge, and commuters, who have been patient with us throughout the construction works. We really appreciate the understanding they have shown.” 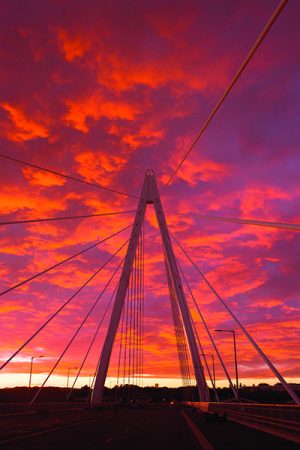 Work began on the project in May 2015, with Farrans Construction and Victor Buyck Steel Construction Joint Venture (FVB JV) appointed as main contractor. BuroHappold Engineering and Roughan & O’Donovan were the design team on the project.

In early 2017, the bridge’s centrepiece – a 100m white A-frame structure – was put into position. This element of the project took 15-and-a-half hours – split over two days – to complete the lift, which saw 1550-tonne pylon gradually raised into place.

The operation was the culmination of two years of design and planning, and 12 months of fabricating the pylon for FVBJV. Commenting on this element of construction, Stephen McCaffrey, project director for FVBJV, said: “We could have built the pylon on site, from the ground up, but we chose to fabricate it in one go, off site, in a factory environment because we had better control over conditions, got a better quality of finish, and could avoid having people working at height.”

With the centrepiece in place, the next milestone came with the installation of the bridge deck. This took a total of 20 hours to slide the 4,750-tonne concrete and steel structure into its final position over the River Wear between Pallion to the south and Castletown to the north.

Stephen said: “The bridge deck launch went very well. It was a substantial structure to move across the river, so it was a very slow and steady operation. The positioning of the deck throughout was crucial as it had to be navigated through the middle of the pylon and then onto each of the temporary supports built in the river to support it.

“We had a team of people guiding it across and scrutinising its progress, as it was planned to the millimetre, but it went as expected, so we are very happy.”

Before the end of 2017, the bridge was given a new name. Following a week-long public vote, where members of the community were asked to choose their favourite from a possible list of three names, Northern Spire was chosen as the bridge’s new title.

Speaking at the unveiling of the name Northern Spire, Sunderland City Council’s Deputy Leader, Cllr Harry Trueman, thanked everyone who took the opportunity to vote.

He said: “I’m delighted to unveil Northern Spire as the name of Sunderland’s new bridge across the River Wear. This impressive structure is ambitious, striking and indicative of the future plans of the city and I think the new name fits it perfectly.

“Northern Spire is a strong, memorable name that will become synonymous with Sunderland. It relates to the regional significance of the new bridge, as well as the spectacular 105m central pylon, which is a welcome addition to the Sunderland skyline and which can be seen from miles away.

“Northern Spire, centrepiece of the city’s ambitious infrastructure investment programme, will be the catalyst for regeneration and further investment in Sunderland – it will play an integral part in the growth of the city in the years to come. In time, it will also become part of the city’s history, so it’s wonderful that so many people voted and played a part in that history-making.”

In February 2018, The Duke and Duchess of Cambridge gave their royal seal of approval to Northern Spire. Their Royal Highnesses William and Kate drove across the bridge when they visited the construction site during a visit to Sunderland. 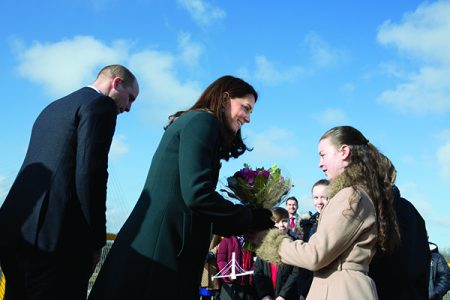 Speaking after the visit, the Mayor of Sunderland, Councillor Doris MacKnight, said: “It was wonderful to meet the Duke and Duchess and she looked absolutely radiant. The Duke takes a keen interest in engineering and they both seemed really interested in the bridge and the story behind it.

“They also spent quite a bit of time talking to some of the people who have been instrumental in its design and construction over the last three years.”

She added: “This is a project that’s of massive significance to everyone in Sunderland and across the North East, bringing with it significant economic, regeneration and transport benefits to our city and the wider region.

“This is the first bridge to be built over the River Wear for 40 years and it’s a project that has really captured people’s imagination, so it means a great deal to have the Duke and Duchess here taking such a keen interest in the project and all those involved.”

Throughout the construction programme, the project team aimed to keep disruption to a minimum. However, due to the nature of the work, some alterations to services took place, including the closure of roads – an unavoidable necessity, but one which has resulted in an important piece of infrastructure for the city. Weather also impacted the project, something unavoidable, especially considering the extreme conditions the UK has experienced in 2018.

Project Director, Stephen, said: “With a project of this size and nature, there were always going to be challenges, and we knew the weather was something we could do little about. The wind, rain and very cold temperatures were an issue for us earlier this year.”

However, despite the challenges, Stephen appreciates the value of a project like this.

“It’s been a project that I think all of us will remember for the rest of our careers.”

The new bridge forms part of a much wider programme of works, designed to improve access from the A19 to the city centre and the Port of Sunderland.  Northern Spire formed Phase 2 of the programme, with Phase 1 – work along St Mary’s Boulevard – having already reached completion.

Phase 3 – a new dual carriageway – will go under the Queen Alexandra Bridge, through Deptford, and will link into St Mary’s Boulevard. This phase will begin next year.

For further information about the Northern Spire, or to find out about other projects which are taking place within Sunderland, please visit: www.sunderland.gov.uk.