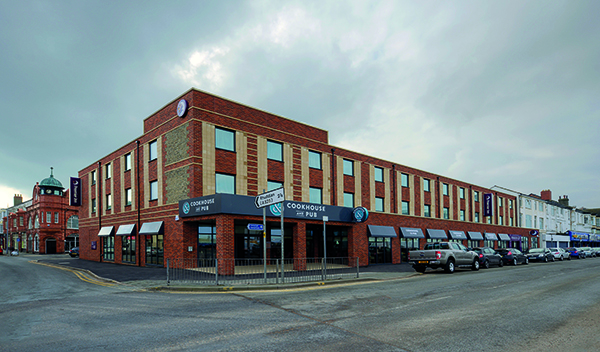 Three brand new Cookhouse and Pub venues have been completed for Whitbread as part of an ongoing national roll-out to a new design concept.

The brand, which won ‘New Pub & Restaurant Concept’ at this year’s Menu Innovation and Development Awards (MIDAS), aims to re-invent the pub dining experience, delivering the quality food and service of an informal, all-day casual restaurant, with the relaxed vibe and affordability of a pub.

The new venues – in Rhyl, Cornwall and Cheshire – were designed by JMDA Ltd, who created the overall new-look concept for the brand, working closely with the client.

The 185-cover Rhyl Cookhouse and Pub, located near the seafront, occupies the ground floor of a new building shared with a new Premier Inn and has a separate entrance.

The overall colour scheme is in the teal, coral yellow and mushroom palette selected as part of the overall design concept for the brand.

Floors are in a combination of timber, bespoke carpeting and wood effect vinyl, with hexagonal terracotta tiling near the breakfast counter.

Alec Mackenzie said: “Main contractors for the interior fit out were Medlock Construction, who did a very good job and also constructed the entire new building. The client was happy with the result.”

In Fraddon, Cornwall, the new 218-cover Cookhouse and Pub was created through the refurbishment of a former Brewers Fayre site.

The works included a combination of stripping out of the old interior and making good of other areas. This included retaining and over-cladding the existing chef’s counter in reclaimed scaffold boarding.

Alec Mackenzie said: “The original back bar was amended to include a new display of spirits and the bar frontage was over-clad with a mixture of reclaimed scaffold boarding, together with teal coloured herringbone effect panelling to the coffee counter section. A new viewing window was also installed in the wall adjacent to the kitchen, so that guests can watch their food being prepared.” 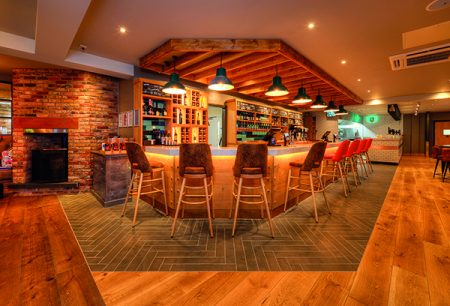 The original fixed seating was re-upholstered to the brand standards and new electronically operated timber shutters were fitted to conceal the original breakfast counter when not in use.

Again, the same new teal, coral yellow and mushroom palette is featured in the colour scheme.

Alec Mackenzie said: “The project was carried out by Myriad Construction who did a really good job and the client was pleased with the project on handover.”

Also created through the refurbishment of a former Brewers Fayre, works to the new Cheshire Cookhouse and Pub included the introduction of new bespoke carpeting and Antico wood effect vinyl flooring, new pendant lighting, and the re-cladding of the bar in reclaimed scaffold boarding, with new teal coloured herringbone effect panelling to the coffee counter section.

A new section of fixed seating was installed in the bar, which also includes both refurbished existing and new furniture, including tables, fixed and loose seating.

A new breakfast counter was installed near to the kitchen, together with timber shutter bi-fold doors to conceal it when not in use.

Again the new concept palette of teal, yellow and mushroom is much in evidence.

Alec Mackenzie said: “The main contractors were J. Wilkinson who did really well with the project, and the client was pleased at handover.

“So far we have handed over eight of these new venues, with others in the pipeline. We are very happy to be working with Whitbread – a very good client – and to be helping them to make the most of each site.”