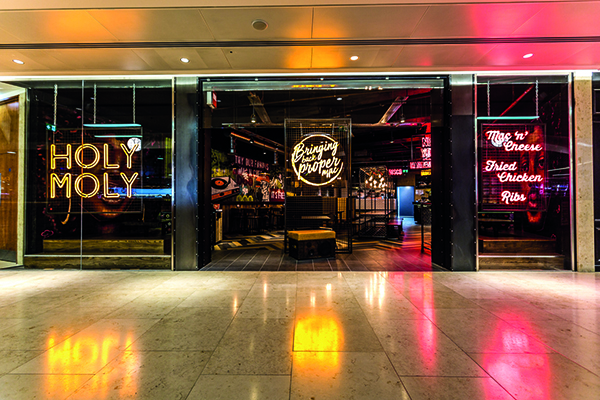 Founded in 2015, Holy Moly Macaroni began as a street food stall and featured at the popular Digbeth Dining Club, sharing dishes inspired by Harlem, New York. With Harlem-inspired décor including neon signs and graffiti wall art, the soul food scene has now been brought to the heart of Birmingham by the Holy Moly team and their exciting new menu.

Speaking to Premier Hospitality magazine, Suzy Pursley, Interior Designer at Newman Gauge Design who completed the look of Holy Moly said: “We aimed to stand out against other high street casual dining brands and really make people intrigued by this exciting and loud new kid on the block.

“One of the most important areas we considered was the shopfront. We wanted it as open as possible for full views of the neon and graffiti inside, to attract people in. It was also important for the neon signage to be almost eye level on the shopfront and not just at high-level like everyone else, so you can see us from across the atrium. We also have stepped booths either side of the entrance that are like New York brownstone domestic stoops, which really help emulate the casual street vibe.

“We created the New York street style with lots of exposed reclaimed brickwork, graffiti and rough and ready and makeshift materials, alongside American basketball fences, reclaimed cladding and bespoke basketball light features. This mixed with a hint of American soul and funk through things such as the reclaimed speakers bar front, old records and disco neon makes it a really exciting space.”

Open daily from 11am to 10pm, Holy Moly Macaroni is serving its famous ‘Uptown Mac’ dish with wild mushrooms and truffle oil, loved by those on Sunday Brunch, as well as its famous ‘Proper Mac’ four cheese macaroni in addition to vegan and vegetarian options.

Macaroni fanatics can also create their very own mac and cheese dishes thanks to the ‘make your own mac’ option where customers have the freedom to pick their base sauce out of three options and choose the toppings that they want added to this.

Real Soul food doesn’t stop at Mac and Cheese; the Holy Moly Macaroni menu also serves alternative dishes including ‘Baby Back Ribs’ and the classic ‘Chicken and Waffles’ with buttermilk fried chicken, fluffy-on-the-inside waffles and maple syrup, plus a selection of delicious sides and desserts.

John Burke from Holy Moly Macaroni said: “It has been a real journey for the team at Holy Moly and we’re incredibly proud to open this restaurant that means so much to us all. We can’t wait to see people come together to enjoy real soul food at Holy Moly Macaroni and experience the variety of dishes our menu has to offer.”

Suzy added: “I think there has been a lot of excitement surrounding the concept and there has been some really enthusiastic feedback. It has been great to have worked with the guys behind Holy Moly to develop this amazing environment. I am so excited to see what the future holds for Holy Moly and am proud to have been able to encapsulate the Harlem soul food vibe in Birmingham.”