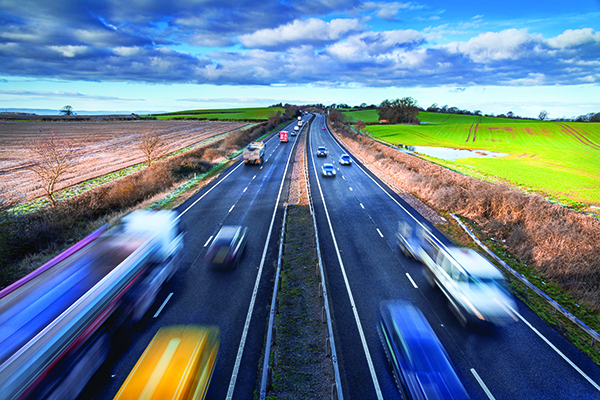 Delivered by the Department for Infrastructure, the project will enhance a route used by 18,000 vehicles each day and address issues such as congestion at key times. A significant investment of £160m will strengthen links between Belfast and Derry/Londonderry. The long term benefits to road users and the local community will include reduced journey times and improved road safety.

In 2015 the contract for the project was awarded to a Graham/Farrans Joint Venture. A total of 14 km of new dual carriageway will be constructed as part of the scheme. This will be done in two sections: 7.3 km from the end of the M22 at Randalstown to the Toome Bypass; and 6.7 km from Toome Bypass to the Castledawson roundabout. The project first started on site in June 2017 and will be completed in 2021.

Thanks to the unusually warm weather that has been enjoyed across Great Britain during the past few months, progress has been very good and a number of significant elements are now visible to the public. The first overbridge structure was opened on the 16 July 2018. The bridge carries traffic from the Ballynafey and Ranaghan roads over the new dual carriageway and it forms an important link for the local community between Moneynick Road and Staffordstown Road.

The opening of the Ballynafey overbridge also allows for the temporary closure of Derrygowan Road from 16 July 2018 to 30 June 2019. This will enable the new carriageway embankment works and completion of the Derrygowan overbridge and the permanent ‘stopping up’ of Gallagh Road from the 16 July 2018.

The site has a total of 6 Borrow Pits, with 5 currently in operation and a sixth Borrow Pit, between the Hillhead Road and Deerpark Road, due to open later this month. In each Borrow Pit clay and rock are extracted and used in the construction of the mainline A6 and the new dual carriageway’s embankments.

The benefits of the project have already been felt in the local economy. During the construction phase, the scheme is supporting the construction industry and local jobs and is delivering a direct economic benefit of £2.30 for every £1 of capital investment. So far, the project has also provided local employment opportunities to 18 education leavers / long term unemployed, 7 Apprentices, 16 Student Placements, 17 Work Experience Students and has assisted 4 University research projects. The site has been visited by local Schools, Colleges and Universities to see first-hand the construction works, with over 110 educational visitors to date.

The project was recently shortlisted for the NI GO AWARDS for Sustainable Procurement.