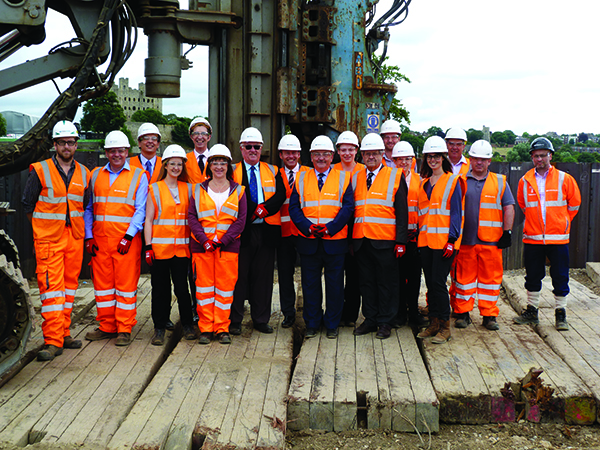 Work to transform the waterfront in Strood, Medway, has commenced with the intention of paving the way for future development of the area including more than 1,000 new homes.

Earlier this year, Medway Council was awarded £3.5 million funding from the Government’s Local Growth Fund through the South East Local Enterprise Partnership (SELEP) to enable flood defence works to take place on the former Civic Centre site. The council is investing in flood defences to regenerate the former Civic Centre and Strood Riverside brownfield sites, which will pave the way for future residential-led development on the site.

The flood defence works, which are being carried out by VolkerStevin, are currently underway and are expected to be completed in spring 2019.

Leader of Medway Council, Cllr Alan Jarrett, said: “I am delighted work has begun at Strood Waterfront. Once the works are complete the project will bring hundreds of homes to the area, including affordable housing. These works, and the ongoing regeneration project in Strood town centre, will transform the area. Strood Waterfront is just one of Medway’s monumental regeneration projects and I look forward to watching the works progress.”

The council has also adopted the Strood Waterfront Development Brief, which provides planning guidance for developers and shows how Strood’s Waterfront will be transformed with more than 1,000 new homes, including affordable housing, new businesses and public spaces.

Cllr Rodney Chambers, Medway Council’s Portfolio Holder for Strategic Regeneration and Partnerships, said: “I am pleased the flood defence works are underway. This is the first phase of development at Strood Waterfront which will make way for future development of the site which has breath-taking views across the river to Rochester castle and is close to two railway stations. Strood’s retail offer is expanding and it is becoming an increasingly popular area for residents and businesses.”

Christian Brodie, Chairman of SELEP, said: “Medway has a longstanding ambition to deliver new homes and create an environment that nurtures skills and business.

“With Strood only 34 minutes away from St Pancras on Southeastern’s high speed services, the £12.5m we’ve secured from government will help regenerate Strood and further boost the Medway economy.”

Rob Coupe, managing director at VolkerStevin, said: “We are pleased to have been awarded this flood defence project which will not only help protect homes, but also allow for economic growth within the housing market. Working alongside one of our other VolkerWessels UK business units, VolkerHighways, demonstrates the diverse range of our capabilities as part of a wider group.

“In addition, two of VolkerStevin’s specialist division’s, VolkerGround Engineering, and VolkerBrooks, will collaborate together to procure and install the new steel sheet pile wall and undertake awarded fabrication works.”

The flood defence scheme is running alongside a £9 million transformation of Strood Town Centre. Improvement works began in February 2018 following a consultation with traders, residents and businesses. Funding was obtained from the Local Growth Fund, also via SELEP.

Two phases of the works have already been completed including an improved market space and car park in Commercial Road. Further aspects of the works include improvements to the existing central island between Station Road and Commercial Road which will be made more accessible for pedestrians, and improvements to the road layout in the town centre to reduce congestion.