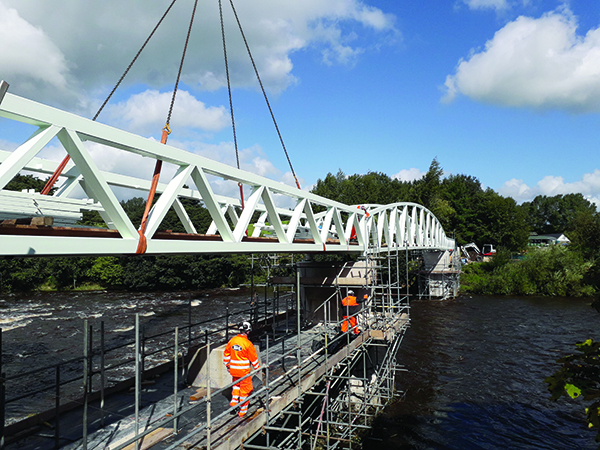 Construction of the brand new Dinckley Bridge, which carries a footpath across the River Ribble near Hurst Green, is progressing well, in a project to replace an older bridge which had been closed since being hit by flooding in 2015.

The project is particularly challenging in that the bridge is located in a remote area with no road access.

The old structure, unusual for being a pedestrian suspension bridge, suffered severe storm damage to the deck and the hangers which attach to the suspension cables and its closure severely limits options available for walkers in a popular countryside area.

Lancashire County Council initially had to decide whether to try to repair, or replace, the 1951-built bridge, taking into account issues such as its age, the level of damage, and what could be done to protect it from a similar incident in future.

The council unveiled a plan in March 2017 to replace the bridge and raise its height to mitigate against future flood damage, using £1.5m in funds received from the Department for Transport.

NRS produced a detailed design and developed an ambitious programme to ensure that works in the river were complete by the end of September 2018 and work on site began in June 2018. NRS’s proposal involved using a large crane to lift the new bridge into place in sections from one side of the river. This meant that disturbance in the river would be kept to a minimum, reduced risks around working in water and potential delays due to flooding.

The old bridge was dismantled by specialist contractors who set up scaffolding around the piers and used ropes to access the deck and cut it into sections for easier removal. The piers in the river have been left in place as they will be raised by 1.5m and used to support the new bridge.

A huge mobile crane capable of lifting objects to a height of over 150m was used to lower the new bridge into place.

The replacement bridge is made of lightweight steel, supported by a curved truss, with the deck width increased to 2m to provide more passing space for walkers. There are steps on the north bank and a ramp at the south to allow for the additional clearance below the bridge, which is supported by stone-faced abutments.

Because the River Ribble is environmentally sensitive and supports a number of important species including salmon, working in the river was restricted to a narrow window and needed to be complete by the end of September 2018.

Environmental surveys needed to be carried out and potential impacts identified. In addition, access to the site was difficult and required a great deal of planning as well as the cooperation and goodwill of local land owners and affected residents. 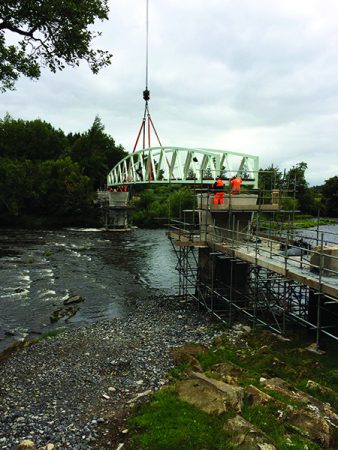 Initial works by NRS Ltd included building a compound and constructing an access track from Kenyon Lane, The existing bridge supports were then raised by 1.5m, with the new bridge being craned into place in September 2018. Further works include the construction of steps and a ramp up to the bridge, and restoring the access track. The project is scheduled to be completed by the end of January 2019.

County Councillor Keith Iddon, cabinet member for highways and transport, said: “The damage caused to Dinckley footbridge during the winter storms of 2015 left us with quite a headache as there was a lot of work to do simply to understand the options for repair and replacement, and how much each would cost.

“We decided that replacing the bridge would provide the best value for money, as the existing one was over 60 years old and would soon have needed considerable maintenance on top of the work to repair the flood damage.

“The storms of 2015 were not the first time the bridge had been damaged by flooding, and the new bridge will be raised above the height where it could reasonably be likely to be affected by flood waters in future.

“I’m very pleased that we are now replacing Dinckley Bridge and will restore access across the river for the many people who enjoy walking in this area.”

Dugald MacCallum, Contract Manager for NRS Group said: “We are delighted to have the opportunity to carry out this demanding project for Lancashire County Council. Our site team were outstanding demonstrating the expertise we have at NRS to deliver projects of this nature. We are grateful to the local community for their patience during the project.”

The NRS Group has been providing clients with complete solutions to their building and civil engineering needs for over 40 years.

Operating throughout the UK and Ireland, the company offer clients a wealth of knowledge and experience and believe that a partnership approach is the way forward.

NRS has a reputation for delivering high quality projects in whichever sector they operate. Utilising their own directly employed staff and extensive plant fleet gives NRS the flexibility to give clients what they require on time and to an agreed budget.