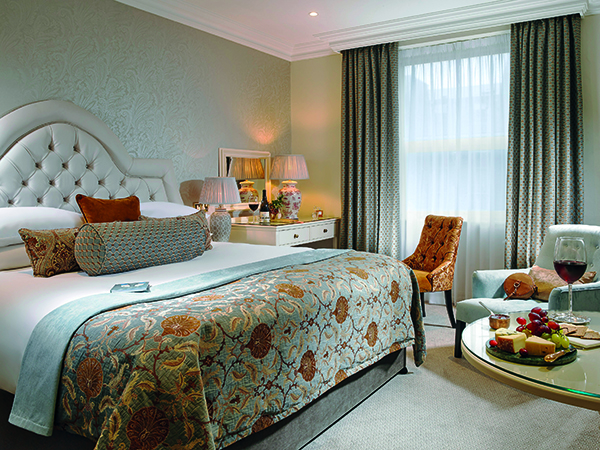 A €400,000 refurbishment project at the iconic Imperial Hotel, Cork City, has been completed. The work saw 45 of the property’s bedrooms upgraded to ensure the ultimate guest experience at the Flynn family owned hotel.

The Imperial Hotel is Cork’s most centrally located hotel and has been part of the fabric of the city for over 200 years. The refreshed rooms include specially sourced, bespoke fabrics and furniture designed and sourced by leading Dublin based design company, Global Design Concepts.

A vibrant colour scheme of orange, contrasting with light blue, has created an easy on the eye, inviting space for guests to enjoy and relax in, while maintaining the character that the hotel is synonymous with. Julia Bialas, from Global Design Concepts, commented:

“The brief was to redesign the 45 bedrooms to the highest standard, enhancing its luxury and at the same time staying true to the iconic building and maintaining the classical feel.

“From the second a guest enters the hotel, they are embraced in its classic 200-year old architecture and sophisticated interiors. When designing the bedrooms, the main focus was to retain that elegant style whilst also creating a warm and inviting place in which hotel guests could relax and feel at home. The bedroom scheme was completed by combining rich, patterned fabrics in a vibrant orange and contrasting light blue colour. The use of bespoke fabrics and furniture has also helped to achieve a luxurious feel, as well as maintaining the character of the building.

“It was very important for GDC to be part of this magnificent project. Having built an outstanding relationship with Flynn Hotels over a number of years, we were more than happy to once again be involved in the refurbishment and offer the Imperial Hotel a turn-key renovation along with design services, allowing the hotel to stay open with minimal disruptions to guests.”

The Imperial Hotel invested in a sophisticated new Lancer Glycol Refrigeration system by ecoCOOL. This system runs throughout the kitchen cold rooms, bottle coolers and draught beer in all bars. This new in-room system will reduce the property’s energy costs, and ensure the highest level of comfort for guests in their rooms.

General Manager of the Imperial Hotel, Frits Potgieter explained the ethos behind the project:

“I believe in the character and history of the Imperial, and what it means to the people of Cork. This project was a continuation of the way the property progresses and moves forward; but an important aspect of this was to remember the iconic stature of the hotel, and while upgrading, to stay true to that and maintain the classic feel.”

Designed by Thomas Deane in 1813, the Imperial Hotel was initially used as commercial rooms for city merchants, and in 1816 the building was extended to serve as a hotel and coach yard for the visiting business people, traders and merchants. Down through the years the Imperial has welcomed a sea of famous faces including Charles Dickens, who gave a reading here; Daniel O’Connell, who addressed an assembly at the hotel; and Franz Liszt, who performed a piano recital in 1841. Arguably, the hotel’s most famous guest was Michael Collins, who spent his last night in Room 115, before meeting his fate at Béal na Bláth on August 22, 1922.

The works in the Imperial are part of a €3m investment in refurbishment works across the Flynn Hotel group’s four properties, which also include the Newpark Hotel, Kilkenny; Old Ground Hotel, Ennis; and The Park Hotel, Dungarvan; and this is not the first significant investment in the Imperial by the Flynn family, who purchased the property in 1998. Prior to the latest upgrades, €10m was invested in a redevelopment that included the addition of the hotel’s Escape Spa in 2006; while in preparation of its bicentenary celebrations in 2016, almost €1 million was spent on upgrades which included a new fitness suite for residents’ use, and the introduction of ‘Seventy Six on the Mall’, a new bar and food offering located just off the lobby, where the old ‘South’s Bar’ used to be.