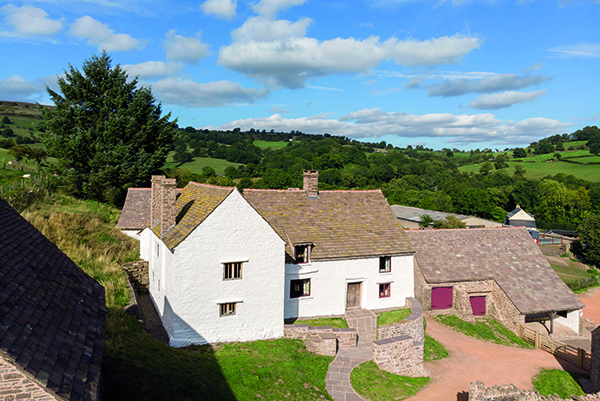 A multi-million pound restoration project led by the Landmark Trust to meticulously restore a Grade I-listed house in the Black Mountains in Wales has been completed.

Llwyn Celyn was built in 1420-21 and had remained largely unaltered since around 1690. The rare building was rescued from dereliction at a cost of £4.2million by Landmark’s team using traditional craft skills, including carpentry, joinery, and masonry. Llwyn Celyn becomes the 200th historically significant building to be saved and sensitively transformed for self-catering holidays by the charity.

Located in the Llanthony Valley on the edge of the Brecon Beacons National Park, Llwyn Celyn is regarded as one of the most remarkable of all surviving late-medieval houses in Wales. The precious building was in a perilous state of disrepair and on the brink of collapse when it first came to Landmark’s attention: shrouded in emergency scaffolding since the early 1990s, supported by a forest of temporary props, and with water coursing from the hillside through the ground floor.

In Landmark’s care, Llwyn Celyn, which sleeps eight people and costs from as little as £909 for a four-night break (the equivalent of £28.41 per person per night), will never again fall into disrepair.

“The rescue of this fascinating 15th century house is a true milestone. It is Landmark’s 200th building, but also testament to the monumental enthusiasm and expertise of everyone involved – from the craftspeople who pieced it back together using traditional skills, to the supporters, volunteers and National Lottery players who made it all possible. Thanks to all of them a precious piece of our past has been secured and will now be with us for all to enjoy and understand for centuries to come.”

At a cost of £4.2million (£2.5million of which was granted by the Heritage Lottery Fund thanks to National Lottery Players) Landmark’s ambitious project to save Llwyn Celyn was over a decade in the planning and culminated in over two years of complex restoration work on site.

“As a company we undertake the maintenance of Landmark Trust properties in our area and have enjoyed an excellent working relationship with Landmark since the late 1980’s when we first worked together to save St Winifred’s Well, Nr Oswestry. Prior to being awarded the contract to carry out the conservation and restoration works at Llwyn Celyn we had been engaged by The Landmark Trust to assist with the early investigation and opening up works, while still occupied by the brothers who farmed there, in order to learn a little more about the building and so we had a good idea of the task that lay ahead. 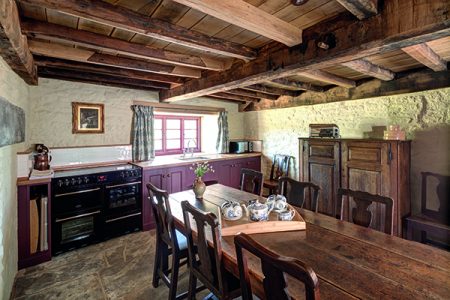 “The nature of the work had the conservation and retention of existing elements at its core. Part of the works included extensive roof structure repairs and the consolidation of the masonry walls using “invisible” anchors and ties wherever possible rather than dismantling and rebuilding affected walls. Roof coverings were re-instated using the salvaged stone slates wherever possible with the shortfall in quantities made up with new, locally sourced natural stone slates. First floor joists, beams and boards were repaired with dry oak sections and new ground floors comprised of recycled glass insulating hardcore under a limecrete floor slab which incorporated the new underfloor heating system beneath the re-laid original flagstones (these again were made up for in quantity using locally sourced sandstone flags).

“Llwyn Celyn has been a fantastic project to be a part of and the whole team involved have been a pleasure to work with. Many of our craftsmen who were involved from start to completion have commented that they it will be difficult to find another project so interesting and rewarding and for many the “icing-on-the-cake” was the opportunity to meet and discuss the project with his RH the Prince of Wales at the opening of the property.”

Its high status features, such as carved doorheads, suggest it was the home of an important person, possibly even the Prior of Llanthony Priory. The remote valley in which it sits was devastated in the ‘Prince of Wales’, Owain Glyn Dŵr’s uprising against the English crown (1399-1415), and the building of the house may have been part of the reconstruction effort that followed.

Later used as a farm, Llwyn Celyn was continuously inhabited until 2014 and several Grade II-listed ancillary farming outbuildings survive. They have also been repaired and, in a new departure for Landmark, are now offered as an interpretation space open to all during daylight hours, a mixed community-use space for craft training workshops, and a bunk house for Duke of Edinburgh candidates.

The Landmark Trust was founded in 1965 to preserve architecturally interesting and historic buildings at risk, giving them a future by letting them for self-catering stays. The rental income pays for the buildings’ upkeep but the Trust relies on grants and voluntary sources of income to rescue further buildings at risk. Full details of all Landmark’s 200 buildings are available on the website: www.landmarktrust.org.uk. 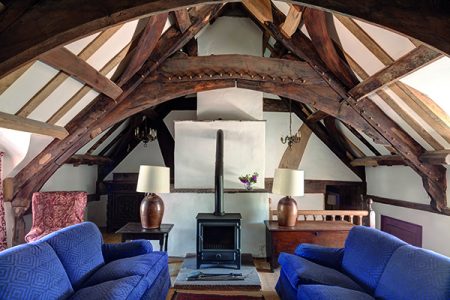