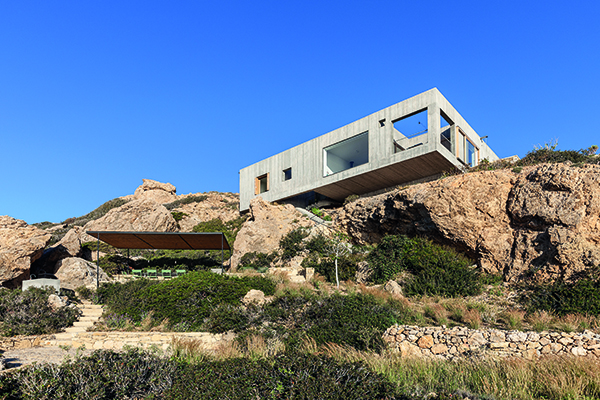 Located on a dramatic spot of land overlooking the Aegean Sea, on the Greek island of Karpathos, House in Karpathos is a standout project from OOAK Architects.

The property was carefully created for a Paris-based French-Swedish couple who had travelled to Greece to windsurf for many years. Having identified a dream spot to live, they tasked Stockholm-based OOAK Architects to create a destination to match.

The construction of House in Karpathos was completed in 2018 and has already garnered a large degree of attention. The residential property was one of 21 projects to be shortlisted for this year’s WAN Awards in the ‘House of the Year’ category.

The home owner’s had searched long and hard to find the perfect site but knew Karpathos was the ideal spot as soon as they laid their eyes on it. The dramatic plot includes open views of the Aegean Sea and direct views of the windsurfers on the beach of Afiarti. The sparse, untamed and dramatic landscape also formed the starting point for the design.

Every manmade alteration would be visible in this unique lot with its jagged, textured cliffs that descend into the grand Aegean Sea. The question became how to introduce a foreign object – a house – into this spectacular landscape, enhancing its qualities without altering its character. Rather than trying to mimic the landscape, the house is gently placed on the site as an object, leaving the surrounding landscape as untouched as possible.

Landscape and building are perceived as two distinct elements that together create a new entity – much in the way a perfect shell merges with a rock over time and gradually becomes part of the rock formation. The two distinct objects enhance and complement each other.

The site has two natural plateaus, one higher and one lower. In order to take full advantage of the views and reach closer to the sea, the building extends beyond the higher plateau, hovering over the landscape. This cantilever effect has a strong presence that augments the full experience of the site both from the inside and out. From the inside, it creates the illusion that the house is hovering over the sea, whilst from the exterior it further accentuates the contrast between the manmade and the natural.

The building’s structure is cast in-situ reinforced concrete. The cantilevered portion of the building consists of Vierendeel trusses. The exposed concrete exterior is contrasted with a soft and light interior. The interior makes clear references to traditional Karpathian architecture combined with Scandinavian furniture and a wide palette of materials. The windows, which are of different sizes and character, are carefully placed to frame unique views of the sea and the surrounding landscape.

Karpathos is the second largest of the Greek Dodecanese islands. It enjoys excellent transport links to other Greek islands and mainland Europe thanks to its national airport and ferry terminal. Karpathos is a particularly popular destination during the month of August when revellers attend the Panagias festival. 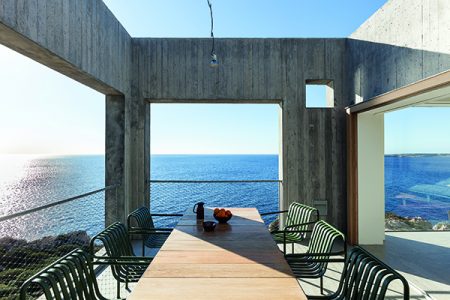 Based in Stockholm, OOAK is an architecture studio run by Maria Papafigou and Marie Kojzar and Johan Annerhed. The firm works on projects that vary in scale and scope, including residential work, interior design and master planning. House in Karpathos is a prime example of the firm’s ambitious and innovative design thinking. To find out more, please visit www.ooakarchitects.com. 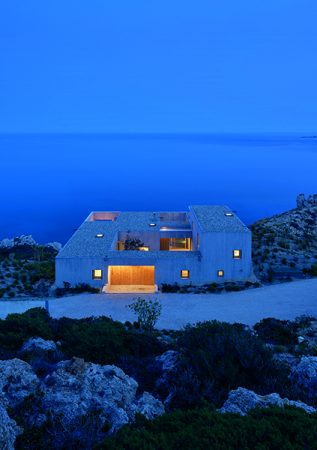