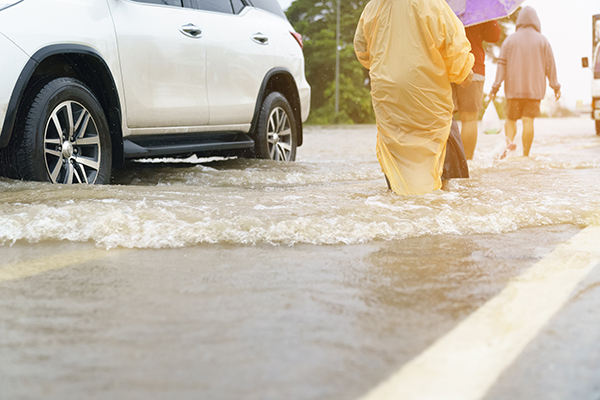 Businesses in the Stourton area of Leeds are benefitting from increased flood protection following the completion of a new 730 metre flood defence wall and property level protection, such as flood gates and demountable barriers.

The project, led by Leeds City Council in partnership with the Environment Agency, has reduced the risk of flooding to 88 businesses in Stourton and is one of the first areas of work for the second phase of the Leeds Flood Alleviation Scheme.

The £1.4m project, funded by Leeds City Council and the European Regional Development Fund, is part of a package of measures of advanced works designed to mobilise defence construction quickly and efficiently to best protect the city, before the main works of the scheme are approved.

As well as the new flood defence wall along the boundary of the Haigh Park Road Industrial estate with the Aire and Calder Canal, property level protection has been installed at four businesses and one Northern Power Grid sit. This has involved supplying 17 aluminium demountable barriers that can be installed by the businesses across door openings in the event of a flood, where surface water flooding could occur due to the water being prevented from discharging into the canal or river as normal.

The works will provide a 1 in 200 year standard of protection to 88 existing businesses in the Stourton Industrial Estate, safeguard over 4,000 existing jobs in the area and help to protect access to the M1.

“It is very pleasing to see these works at Stourton as part of the initial element of phase two of the Leeds Flood Alleviation Scheme completed.

“Similar measures introduced at Woodlesford for phase one proved effective during the Christmas floods of 2015, so these defences will help protect local businesses, safeguard jobs, and vitally offer reassurance and confidence that these improvements do work at a local level.

“These measures provide further protection for our city centre and for the South Bank area, with formal engineering elements supported by the impressive flexible barriers which can be deployed quickly whenever there is a flood threat. We are firmly committed to seeing all our communities and businesses along the River Aire catchment protected through measures like this, and will continue to make the case for the phase two plans.”

On 26 December 2015, Leeds experienced significant and widespread flooding with some of the highest river levels ever recorded following Storm Eva. The flooding affected nearly 3,000 residential properties and nearly 700 commercial properties. 40 businesses in Stourton, between Thwaite Mills and the M1, were significantly affected by the floods.

“The completion of these works is great news for the businesses that flooded in Stourton and for the people and communities who depend on them for the services and jobs they provide.

“Following the successful completion of Phase 1 of the Leeds Flood Alleviation scheme in October 2017, the Environment Agency is continuing to work closely with Leeds City Council to develop and deliver Phase 2 of the scheme, which will help to ensure that Leeds continues to be a great place to live, work and do business.”

CCTV drainage surveys carried out by a team from the Lanes Leeds depot along a flood-risk river identified surface water pipes that needed to be fitted with flood valves.

The non-return valves stop water from being forced back up drainage pipes and flooding properties, a common problem when river levels are extremely high.

Bradley Offiler, Regional Manager of the Lanes Leeds depot, said: “We were able to identify which of the drainage pipes were live and so needed to have flood valves fitted.

“Carrying out drainage condition surveys is a vital part of any urban flood protection process as they identify the many routes water can take through pipe systems.”

Flood protection work currently being carried out by the company, the UK’s largest independent drainage specialist, include culvert cleaning in Wigan and Cardiff, and highway drainage pipe lining in South Gloucestershire.