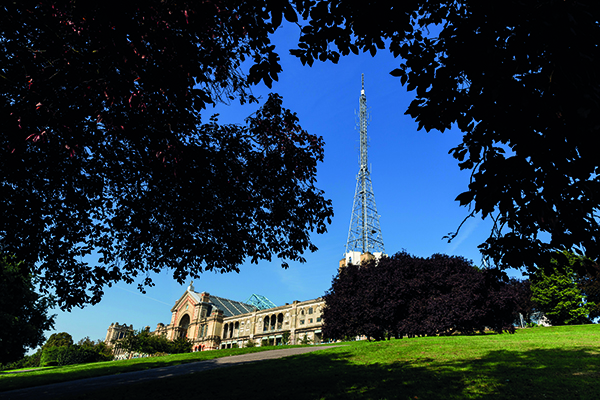 London’s historic Alexandra Palace has celebrated the reopening of its East Court and Theatre following a £27m restoration project.

The Theatre and East Court officially reopened on 1st December 2018 with a series of events following the completion of the three-year East Wing Restoration Project. The East Wing’s reopening heralds a new chapter for Alexandra Palace, creating new ways for the public to interact with the building and its unique history.

The refurbishment of the Theatre formed a central part of the East Wing Restoration Project. Led by architects Feilden Clegg Bradley Studios, the design captures the Theatre in a beautiful state of ‘arrested decay’ – its faded grandeur preserved for a new generation of theatre-goers. The auditorium, which sensitively blends Victorian design with contemporary technology, has been reconfigured to seat almost 900 (with a standing capacity of around 1,300 standing/seated) and can support end-stage, traverse and in-the-round productions.

Additionally the East Court of the Palace, which was originally dubbed the “Cabinet of Curiosity”, now provides a new communal space for the Palace and its community; from the Creative Learning Zone to exhibitions and events, plus space to relax with a coffee and refreshments.

Louise Stewart, Chief Executive of the Alexandra Park and Palace Charitable Trust, said: “Reaching this point is a testament to the dedication of the team at the Palace, our partners and our funders. Without them this work would not have been possible. The re-opening of the Theatre and East Court is a major step forward in our mission to bring areas of the Park and Palace back to life and strengthen our audiences’ connection to our unrivalled history. We look forward to welcoming new audiences and supporters and sharing the Palace’s hugely exciting journey.”

Alexandra Palace originally opened in 1875. A marvel of Victorian engineering, it was home to some of the most advanced stage machinery and mechanics of the age, allowing performers to disappear, reappear and fly through the air.

From those grand beginnings, it went on to be used as a chapel during World War One, a cinema and the theatrical testing ground of stage icon Gracie Fields before being closed to the public and used as a BBC prop store and workshop. Following this idle period, the East Wing was in need of a serious revamp to make it useable once more. 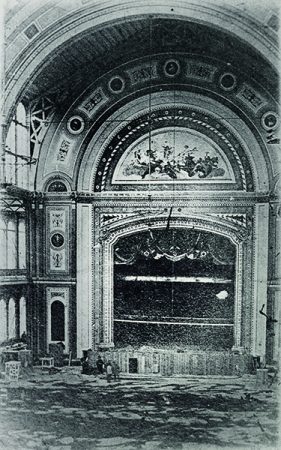 First Alexandra Palace Theatre, destroyed by the fire of 1873

Feilden Clegg Bradley Studios was given the daunting task of making this a reality. Associate Matt Somerville spoke to Premier Hospitality about the project:

“It needed significant investment to put it back into sound condition and to make it useable again. The theatre had been used as a prop store by the BBC when they were in the east wing and it was quite badly damaged. It was then used by the Open University till about 1980 and then the space fell out of use for thirty years. During that time the condition of the fabric, mainly through leaking roofs and gutters, went downhill.

“We inherited a space that had the marks of those earlier uses. It wasn’t about restoration, though. It was about capturing the quality of a unique ‘found space’ with all of the stories it has to tell about how it’s been used in the past.

“The East Court needed to work as more than just the reception for the ice rink. It had quite a limited role and it wasn’t being intensively used. It’s been brought back into use as a multi-purpose space that’s open to the public all day. There’ll be a café opening next year (2019) so the palace can welcome people in to sit with their laptop or come in with the kids. There’s also a great installation where visitors will discover the history of the palace and some of the extraordinary people and events connected to it.

“For the Theatre we were trying to preserve the layers of character in the space. Behind the scenes, we had to do a lot of engineering work, some of which you can see and some that is almost invisible, so the space can be used more flexibly in ways not thought of by its Victorian designers.”

“Working on a refurbishment project is always very challenging because you have to use the fabric in the building. You have to try and use that to the best of your capabilities in order to provide something that’s fit for purpose for today’s productions and audiences

“The stage house itself really is a museum piece. The stage machinery is of significant historic importance because of its very old timber and counter weight machinery. Rather than there being a fly tower above, where scenic cloths would be lowered to stage level, the machinery is sub-stage, so they would come up through the floor. A lot of that machinery is still in place, as well as star traps that would deliver a performer to the stage via a counter weight. Also, all of the stage house side loading galleries are all very warped.

“It was thought very early on that in order to bring that up to a modern intervention would require taking most of that out and that was something that nobody ever wanted to do, so all of the staging formats were conceived in front of the proscenium and the balcony re-raked to allow for good sightlines throughout.

“The operational brief was for a dry hire space, meaning that there needed to be lot of power and stage engineering rigging facilities in place to allow a touring production to come and connect their  own equipment. The finished space has the majority of the technical facilities hidden away and concealed temporary cable routes allow productions to set up and remove equipment as they wish. The theatre has a beautiful, ornate plaster work ceiling through which a network of new penetrations were required to allow hoists to drop through to connect the production trusses. It was quite a challenge to navigate around the existing timber work and the ceiling details to design the network of strongpoints required.”

The theatre’s floor has also been flattened with a new sub floor replacing the crumbling Victorian dwarf walls. The original floorboards have been individually lifted and re-numbered and re-laid. Addressing the idiosyncrasies of the theatre’s original design, the balcony and side balconies have been re-raked to improve sightlines and allow wheelchair accessibility.

The East Wing Restoration Project would not have been possible without the support of the National Lottery and Haringey Council. The East Wing Restoration is a £27million project – the £18.8 million National Lottery grant was one of their biggest ever for a heritage project. In addition to the support from the HLF and Haringey Council, the project has also attracted support from a number of charitable trusts and foundations, including the American Express Foundation, J Paul Getty Jnr Charitable Trust, Garfield Weston Foundation and Heritage of London Trust.

To mark the new era for Alexandra Palace an exciting programme of events was created for December. This included performances from legendary club Ronnie Scott’s, Dylan Moran, Gareth Malone and the BBC’s long-running ‘Friday Night is Music Night’. 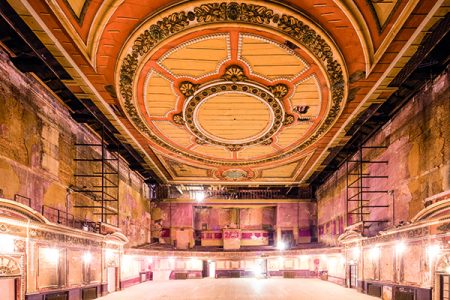 Briggs & Forrester is an established leading player in the building services engineering market and is one of the industry’s largest independent management owned contractors with an annual turnover in excess of £200m.

At the forefront of the industry for over 70 years, Briggs & Forrester provides innovative and cost effective solutions within a constantly changing environment. A diverse range of experience and skills across the building services arena has allowed the company to continually strengthen and grow.

Briggs & Forrester was recently responsible for the installation of all mechanical, electrical and public health works for the refurbishment of Alexandra Palace’s East Wing.

“We are delighted to have provided the building services on the prestigious Alexandra Palace project. It’s a privilege to be involved in these crucial works bringing the past back to life and preserving the Palace history. Not only that, but the redevelopment has secured the Palace’s future, providing a fantastic facility for public use, so it can go on to serve many more people for years to come. Working with the Alexandra Place team and Willmott Dixon Construction has been extremely rewarding.

“We are incredibly proud of our heritage, our clients, customers, supply chain and projects. From our excellent relationships with our supply chain and our motivated and dedicated employees, our focus is on looking to the future. A focused, owner managed approach underpins our commitment to ‘Excellence at every level’.”

CPS is a manufacturer and specialist in fixed seating systems and demountable staging systems of a high quality. CPS also offers a range of spectator seating and loose furniture (tables and chairs etc). The company began trading in 1966 and has stayed within the same family for 53 consecutive years.

CPS was recently responsible for designing, manufacturing and installing four seating rostra configurations, three orchestra pit infill configurations and a stage infill at Alexandra Palace. In total, CPS supplied almost 200 stage decks, circa 1200 stage legs and over 200 fascia panels and valance curtains. This has resulted in being the single largest staging project that the company has worked on in its 53-year history.

“Everyone at CPS feels very grateful to have been given the opportunity to work on the restoration of this British iconic venue we’re delighted with the efforts of our team who have shown great professionalism from concept to completion.”

“We’d like to take the opportunity to thank Alexandra Park and Palace Charitable Trust for giving CPS this unique opportunity and we’re thrilled to be a part of this successful project.”

In operation since 1983, Unusual Rigging is the UK’s most experienced provider of rigging and stage engineering solutions. The company works globally, principally in the entertainment, special event, exhibition and presentation industries.

Unusual Rigging specialise in design and engineering solutions to the challenges of suspending, elevating or moving equipment, scenery or people, whether that be temporary for shows and events or capital projects. The company works in existing venues refurbishments, new builds, or overlay situations for major occasions.

Standout projects for Unusual Rigging include the Olympic Games in London, Sochi, Rio and Pyeongchang; theatres such as The Dominion, Theatre Royal Drury Lane and The Piccadilly; and museums such as Tate Modern, Tate Britain and The V&A.

The company recently acted as Stage Engineering Contractor and project managed this large element of work during the refurbishment of Alexandra Palace’s East Wing.

“Projects such as these are the main body of my career and a significant element of the overall client base for Unusual Rigging Ltd, and as such mean a great deal.

“We pride ourselves on our reputation for accepting demanding challenges, our unwavering commitment to Health and Safety, and our responsible environmental attitude.”