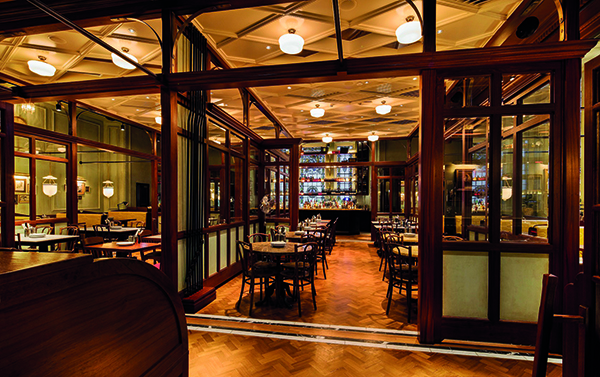 A listed Masonic lodge building in Bridge Street, Manchester has been restored and transformed into Indian cafe brand Dishoom’s seventh restaurant and bar

After three and a half years of planning, Dishoom Manchester opened on 6th December 2018 within Beaux-Arts-style building Manchester Hall.

The stunning interior was created by architecture and design studio Macaulay Sinclair, which specialises in creating exceptional spaces for the hospitality sector and has a longstanding relationship with Dishoom’s co-founders.

Lead fit out contractors for the scheme were Angus Gregory Interiors UK.

John Macaulay, co-director of Nottingham-based Macaulay Sinclair said: “Helping to bring Dishoom to Manchester was really exciting for us, particularly as this is the first Dishoom outside of a UK capital city.

“Each Dishoom restaurant pays homage to the Irani cafés of Bombay, and each is inspired by a historical time period and narrative that we bring to life through our design.

“Dishoom Manchester is influenced by the freemasonry of Bombay, so we specifically visited and researched Bombay’s freemasons’ hall from 1899 and the Theosophical Society of Bombay.

“The symbolism and paraphernalia of freemasonry have been woven into the details, as well as using a colour palette inspired by the iconic Irani café Britannia & Co in the Ballard Estate area.”

Shamil Thakrar, co-founder of Dishoom said: “Macaulay Sinclair has been instrumental in helping us to really understand how Dishoom should express itself in a physical environment. They design spaces in completely different design languages and time periods which could only be Dishoom restaurants. They’ve been completely key in our evolution as a business.”

The 230-cover restaurant and bar has a familiar aesthetic in part to other Dishoom restaurants, with frequent references to the Irani cafés of Bombay, as well as antique furniture sourced from India such as a unique and original teak in/out board from a Bombay hospital.

John added: “We retained the original fabric of the building to restore the grand, civic aesthetic, which has hints of academic classicism. Luckily we were able to retain many of the beautiful existing finishes, including the majority of parquet and marble flooring.”

The Bro. Cursetjee Dining Hall, a ballroom and banqueting suite formerly known as The Derby Room, is a grand, symmetrical space with a striking, parabolic dome. The design team added a free-standing hardwood and glass pavilion-like structure to break down the imposing volume of the room to create a more intimate, controllable space.

Nine portraits of former Grand Masters of the Bombay freemasons’ hall were commissioned to hang on plinths in the dining room, which is complete with grand proportions and high ceilings.

The creative team at Dishoom author a story for each new location and Macaulay Sinclair develops an aesthetic narrative around it. Dishoom Manchester explores the unexpected links between Manchester, Bombay and freemasonry.

Opened early last century by Zoroastrian immigrants from Iran, there were almost four hundred cafés at their peak in the 1960s.

Now, fewer than thirty remain. These cafés broke down barriers by bringing people together over food and drink. Bombay was more welcoming, more cosmopolitan, for their existence. Dishoom pays homage to the Irani cafés and the food of all Bombay.

Cantilever Bars is a well-established company within the food and beverage sector. Cantilever offers bar solutions designed to meet the many varied operational requirements within their industry. They are one of the drivers behind understanding the critical benefits that come with improving the interface between customer and bartender and have led the industry in designing solutions that have informed the way bars work all over the world.

Cantilever Bars has worked with Dishoom at their venues in Kensington, Kings Cross and Edinburgh and now Manchester. In the last year the company has also completed work at The Ned, Ace Hotel, Sky Garden, Claridge’s, Holborn Dining Room, ICA and SUSHISAMBA Covent Garden.

Cantilever Bars worked closely with Dishoom’s expert in-house team to design bespoke cocktail stations exclusively for them. At Dishoom Manchester they took already established design thinking and worked with Dishoom to ensure the operational elements of the bar were perfect for their new venue. They then coordinated the bar designs with the architect and took them to manufacture and installation.

Commenting on their work and ongoing relationship with Dishoom, Maria Fisher from Cantilever Bars said: “We absolutely love being involved with a company with such a refreshing culture that is always pushing the boundaries of possibilities. Dishoom make us feel like part of their extended family, which makes every job even more special.”

Having been in operation since 1993, Cantilever Bars has an established history working with some of the industry’s most influential bartends in some of the most innovative venues around the world.

Working on Dishoom Manchester, Interiors UK were principal contractors and were involved from the initial acquisition of the premises.

“Dishoom are a special client. They appreciate great design and focus on getting the best team around them who are as committed and dedicated as they are. We are extremely proud to have been part of their team for many years now.”